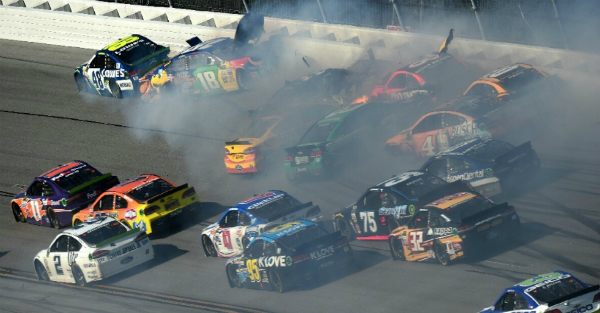 Two things that are synonymous with NASCAR are wins and wrecks. So we thought we’d highlight the latter as we take a look back at some of the biggest wrecks of the year in no particular order.

RELATED: After winning Stage 2, one driver?s day went up in flames at Texas

One that comes to mind immediately was at Pocono back in June. Jimmie Johnson lost control of his car and slid down into the grass, only to be shot back up the track and slam into the wall. Caught up in the aftermath of Johnson’s wreck was Jamie McMurray. He endured a similar fate to Johnson after being sent back to the garage with a DNF for the day.

At the Brickyard 400, Kurt Busch was involved in a crash that not only damaged his ride, but also gave spectators a first-hand look via helmet cam. Clint Bowyer lost control and caromed into Erik Jones. Unfortunately, Busch was trailing the two and became collateral damage in the melee.

.@KurtBusch's day ended in an instant at @IMS.

Here's what Kurt's wreck looked like from the Helmet Cam. #NASCARonNBC #Brickyard400 pic.twitter.com/Wybqbnl7vL

One of the more memorable crashes of the season took place at Daytona, when Kyle Larson and the No. 42 got airborne. The crash saw an early exit for Larson, who ended up in 29th place after being unable to finish.

Who could forget the total chaos that took place at Talladega in October? The crash began with Kurt Busch getting sideways, with the ensuing result being a 16-car crash that sent several playoff drivers to pit road for repairs and even some to the garage. In addition to Busch, the other playoff drivers involved were Ricky Stenhouse Jr., Kevin Harvick, Jimmie Johnson, Martin Truex Jr., Matt Kenseth and Kyle Busch. That was just the tip of the iceberg, as a large group of non-playoff drivers were caught in the action as well, including Austin Dillon, Landon Cassill, Michael McDowell, Ty Dillon, Ragan, Brendan Gaughan, Danica Patrick and Matt DiBenedetto. It was easily one of the biggest crashes on the season.

Massive implications in the #NASCARPlayoffs standings from this one. pic.twitter.com/kn9XWLUUjO

Then there’s the madness at Martinsville that saw Denny Hamlin crash out Chase Elliott, not only preventing him from winning his first race, but also from clinching a spot at Homestead. It easily turned into the biggest feud of the season, and kept everyone guessing what would happen for the remainder of the season.

RELATED: Chase Elliott had plenty to say after being wrecked by Denny Hamlin

New Hampshire saw some playoff hopes start to fade away after a crash that involved five drivers in contention for the playoffs. Of those involved were Kurt Busch, Denny Hamlin, Danica Patrick, Martin Truex Jr. and Dale Earnhardt Jr. Busch and Harvick were officially ruled out for the rest of the day after the crash. The entire debacle was set in motion after Austin Dillon lost control of the No. 4 car.

Austin Dillon got into the No. 4 car, triggering a multi-car crash that involved many other #NASCARPlayoffs drivers! pic.twitter.com/6c95NnM48C

Ryan Newman was involved in a crash with Clint Bowyer at Charlotte back in October that ended his day early. During Stage 1, Newman made contact with Bowyer, then lost control of his race car and shortly thereafter it caught on fire.

The October race in Charlotte had a few crashes that caught our attention, not just the one with Ryan Newman. In the later part of the race, Danica Patrick and David Ragan ended up in a big crash that didn’t do the playoff drivers any favors. Ragan and Patrick both were out of contention for the playoffs but their crash had implications for drivers that were still in the hunt.

Danica Patrick didn't walk under any ladders or break any mirrors, but bad luck followed her to Charlotte. #NASCAR pic.twitter.com/AxORF7lgc9

Late in the race at Richmond, Denny Hamlin wrecked Martin Truex Jr. With one lap to go, Hamlin caught the rear-end of Truex’s car, sending him into the wall. Fortunately for Truex, it had no effect on his position in the standings as he went on to win the championship. Hamlin apologized for the incident and Truex was grateful for his words.

One of the most serious crashes of the 2017 season was one involving Aric Almirola at Kansas Speedway. Due to the nature of the crash and the severity of his injuries, we’ve decided not to include video of the incident. Almirola suffered a compression fracture to his T5 vertebra after the multi-car accident at Kansas. The crash began with Joey Logano crashing into Danica Patrick which sent them both into the wall. Almirola hit Logano and was trapped in his car for 15 minutes.

While those are only the 10 wrecks we chose to cover here, there were definitely many more. One thing that’s for certain with NASCAR, there will be plenty more in 2018.