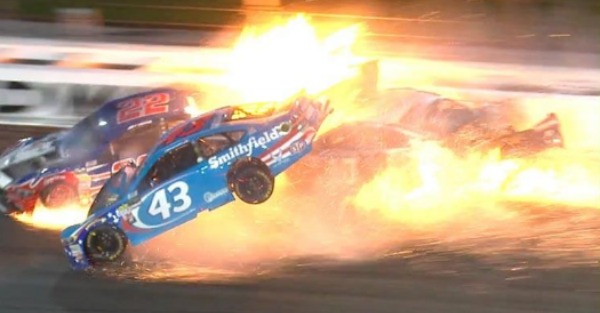 Aric Almirola, who was in a horrific three-car wreck Saturday night at the Kansas Motor Speedway, broke his back in the crash, according to several media reports.

Aric Almirola suffered a compression fracture to his T5 vertebra after this multi-car accident at Kansas Speedway Saturday night. pic.twitter.com/bY6lkWjFVR

The crash began when Joey Logano?s No. 22 Ford crashed hard into Danica Patrick?s No. 10 Ford.  Zfter both cars careened off the outside wall, Almirola hit Logano’s car and was trapped in the wreckage for 15 minutes. He was pulled out, placed on a backboard, and airlifted to an area hospital. He has since been released.

Great night that ended really bad. Grateful for walking away, and hope Aric is ok….but my heart is breaking from this bad luck.