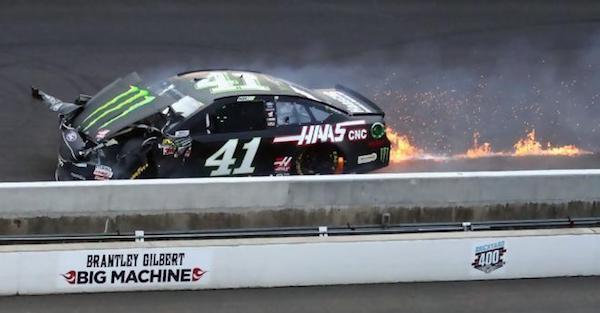 It’s sometimes easy to forget how dangerous NASCAR is. To the uninitiated and desensitized the spinning cars can begin resemble the banal, repetition emerging as the primary feature of the race. That repetition continues until the smell of burned rubber fills the noses of fans around the track, smoke clouds the view of the cameras, and the drivers are left nearly invisible in small cages that hurtle around a track and into each other at great speed.

In the old days a crash was a “had to be there” sort of ordeal. The low-quality cameras, positioned at a safe distance, often failed to capture the excitement and terror of the race. But technology has advanced, and cameras are smaller and better than ever, which brings us to Kurt Busch’s crash at the Indianapolis Motor Speedway.

Replay: This one was nerve-racking. Kurt Busch, Clint Bowyer, Erik Jones and Jamie McMurray are involved in violent crash at @IMS. #NASCAR pic.twitter.com/YUjNnmnH45

Need more to convince you that NASCAR is a spiraling tumbler of danger? Just watch the video above and try to keep it together.

Related: A hard crash knocked out three drivers at the Brickyard 400