A hard crash knocked out three drivers at the Brickyard 400 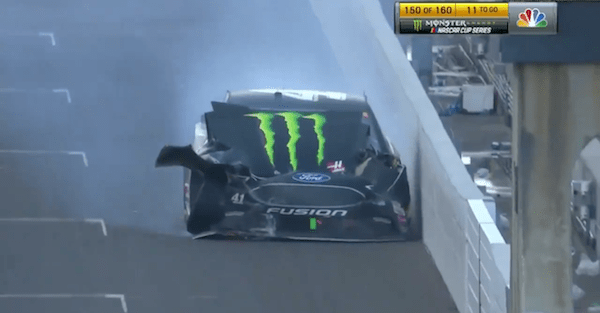 With 10 laps remaining at the Brickyard 400, three drivers wrecked out after a crash involving Clint Bowyer, Kurt Busch and Erik Jones.

Bowyer’s No. 14 car got loose and took Erik Jones with him. Kurt Busch’s car also suffered enough damage to end his day at Indianapolis Motor Speedway.

Related: Watch Kurt Busch get bombarded with trivia while getting in a few laps on the simulator

Here’s a view of the wreck from Kurt Busch himself.

.@KurtBusch's day ended in an instant at @IMS.

Here's what Kurt's wreck looked like from the Helmet Cam. #NASCARonNBC #Brickyard400 pic.twitter.com/Wybqbnl7vL

“I knew the 77 had a run on me and then all hell broke loose,? Bowyer told NBC Sports after the race. ?It pretty much sucks.

?It was definitely not needed, for sure. But we?ll regroup. This is a strong team. I thought we were going to have a (top-five) finish, for sure, but it just wasn?t our day.”

Busch is the only driver of the three to have a win this season, so his playoff standing is secure. But Bowyer and Jones are fighting for playoff sports, and today’s wreck is devastating for the playoff chances of both drivers.