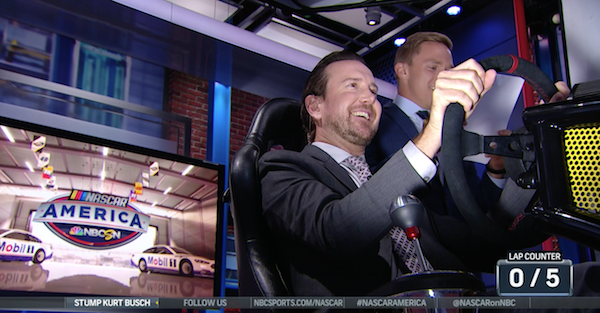 NBC Sports decided to put Kurt Busch’s NASCAR and overall sports knowledge to the test while he prepared for Sunday’s Overton’s 301 at New Hampshire Motor Speedway.

"Who got the game-winning RBI for the @Cubs in Game 7 of the World Series?"

Answering trivia while in @iRacing is hard for @KurtBusch 🤷‍♂️ pic.twitter.com/PAuVIWGXue

Related: Dale Earnhardt Jr. picked up a new routine from the young racers

Busch answered 17 questions correctly during the five laps, which is pretty impressive considering the simulator is difficult and the questions weren’t exactly easy (not many people likely know what Richmond Raceway was initially called).

Busch was quizzed about his own history and finishes at certain tracks, including his many second-place finishes at Daytona before winning this season.

Luckily for Busch, he won’t have to answer any trivia questions when is driving the real thing. Busch has already qualified for the postseason, but is always looking for one more win.