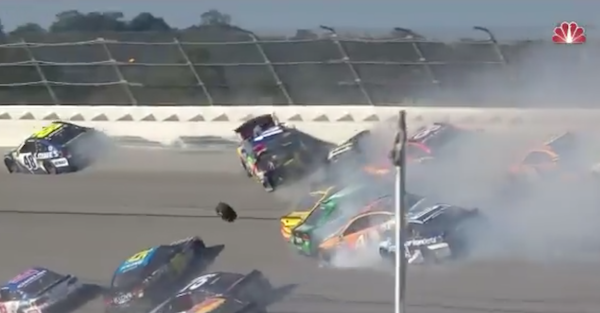 Multiple playoff drivers were involved in a multi-car crash late at Talladega, and the crash eliminated several drivers.

David Ragan’s car was hit from behind, which started the 16-car wreck. Kurt Busch was the first car to go sideways, and he was followed by Ricky Stenhouse Jr., Kevin Harvick, Jimmie Johnson, Martin Truex Jr., Matt Kenseth, Kyle Busch and a handful of other drivers.

Related: Another crash at Talladega and Clint Bowyer lets his frustrations be known

Here’s another view of the crash, and the announcers mentioned that this is something drivers are afraid of entering a race like Talladega.

Massive implications in the #NASCARPlayoffs standings from this one. pic.twitter.com/kn9XWLUUjO

Kyle Busch, Harvick, Johnson and Stenhouse all needed good showings since there is only one race after this in the Round of 12. Johnson earned stage points earlier in the race, which could help him down the road.

The red flag was brought out for over 12 minutes for the wreck.

Dale Earnhardt Jr. was involved, but his car only suffered slight damage.

Moments later in the race, Kevin Harvick and Ryan Blaney crashed, and both saw their day come to an early end.

It’s been a wild race, and it wouldn’t be shocking to see a wild finish down the stretch.