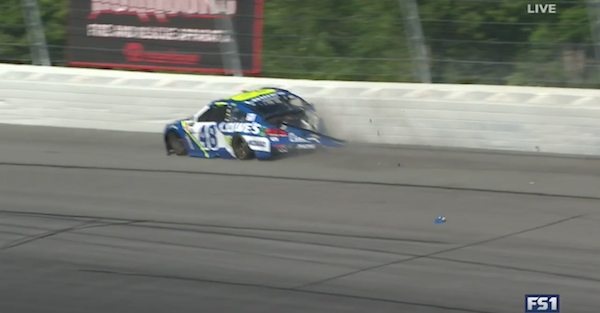 Jimmie Johnson’s quest for back-to-back wins in the Monster Energy NASCAR Cup Series ended when he crashed into the wall during the final laps of Stage 2 at Pocono on Sunday.

Johnson had brake issues, and he suffered a scary crash into the wall. Jamie McMurray wasn’t far behind, and it appeared as if McMurray ran over something from Johnson’s car, which caused issues for him as well.

#NASCAR: Jimmie Johnson on radio after crash: "Whoo. I got away with one there. When I hit the brakes the pedal went straight to the floor."

Johnson isn’t the only Hendrick Motorsports driver who had brake issues today. Dale Earnhardt Jr. reported braking issues, and he did not finish the race.

McMurray was fifth in the points standings entering the race, and Johnson was right behind him at No. 6. Johnson has three wins this season, while McMurray has zero.