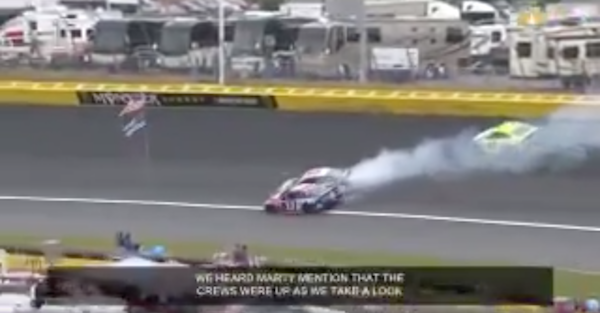 Sunday’s race at Charlotte Motor Speedway was put under caution after a big crash involving Danica Patrick and David Ragan.

Playoff drivers won’t be pleased that a crash involving two non-contenders will have an impact on the race, and Patrick’s car suffered plenty of damage in the crash.

Danica Patrick didn't walk under any ladders or break any mirrors, but bad luck followed her to Charlotte. #NASCAR pic.twitter.com/AxORF7lgc9

Related: Charlotte Raceway says it knows why there were so many crashes during practice Friday

Patrick’s car looked awful following the crash, and her day came to an end.

Kyle Busch also had trouble late, and it had already been a rough day for Busch.

Related: Championship contender runs into the wall for the second time in three days