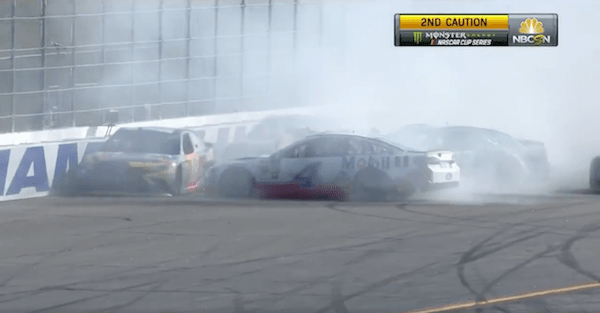 Austin Dillon collided with Kevin Harvick, which created a great deal of smoke and resulted in several other cars crashing.

Martin Truex Jr., Kurt Busch, Denny Hamlin, Danica PatrickDale Earnhardt Jr. and several others were involved, and the caution came out as the damage was assessed. Harvick and Busch are done for the day.

Austin Dillon got into the No. 4 car, triggering a multi-car crash that involved many other #NASCARPlayoffs drivers! pic.twitter.com/6c95NnM48C

Here’s another angle of the crash:

Truex was nearing his 20th stage win of the year, but the crash forced him to head to pit road.

Instead, Kyle Busch won the stage, and he has the second most stage wins this season behind Truex.

The wreck could have a major impact on the outcome of the race, especially since Truex was dominating yet again.