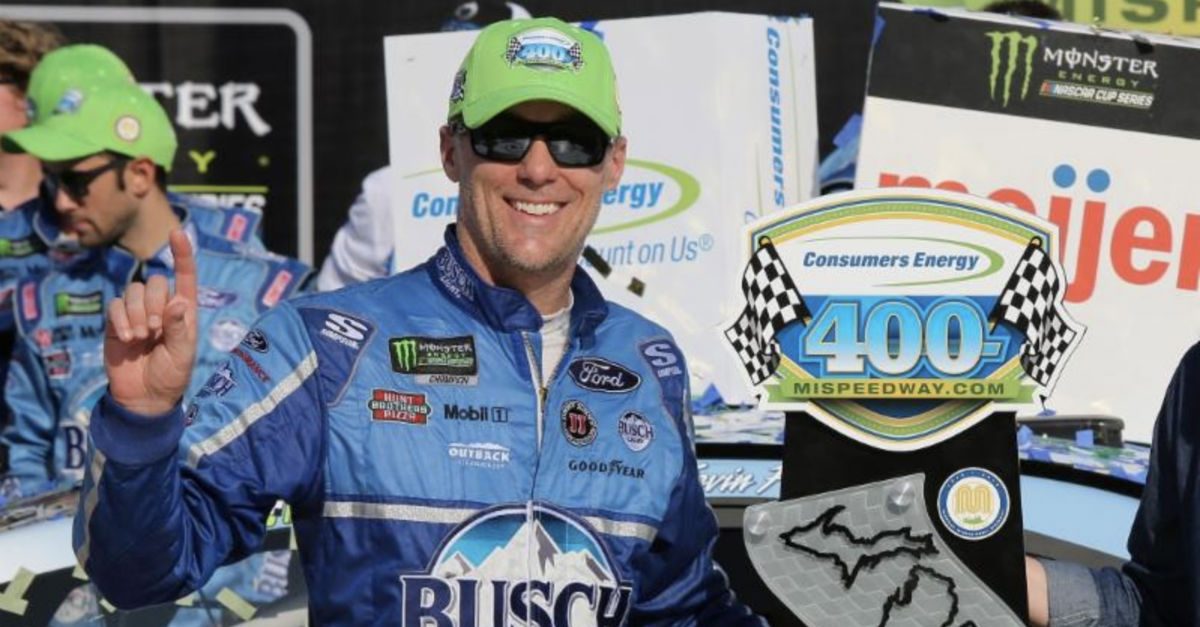 On August 5, the Big 3 took a bit of a backseat as Chase Elliott earned his first win of the NASCAR Cup Series season, but the following week saw the dominant NASCAR trio back in the driver’s seat as Kevin Harvick cruised to victory at the Consumers Energy 400 in Michigan, racking up his seventh win of the season and breaking his wins tie with Kyle Busch.

With 44 all-time wins know under his belt, Harvick tied Hall of Famer Bill Elliott for 16th on the wins list. Despite his impressive week, the focus remains full steam ahead to next week’s Bass Pro Shop’s NRA night race at Bristol Motor Speedway.

Man, it's a good year to be @KevinHarvick! 🏁

He takes it and runs away with it at @MISpeedway in @CreditOneBank's One to Go. pic.twitter.com/WrzzS0hzLc

Harvick led for the majority of the race and ended up beating Brad Keselowski by about 3.2 seconds. His dominant showing marked his second victory at Michigan International Speedway (the first being in 2010), but more importantly, the win saw Harvick surpass Kyle Busch in playoff points, with the former having 40 and the latter having 35.

“The most important thing is winning races right now and getting all the points that you can get to position yourself well to get to Homestead,” Harvick said. “That’s what we’ve been trying to do all year is win races.

“That was our only goal. We didn’t want to learn anything. We don’t want to do anything different. We just want to go out, and we want to win.”

Harvick’s win was capped off by a special family moment, as his six-year-old son, Keelan, ran across the track to collect the checkered flag.

What a moment for father and son.

Keelan takes the 🏁 for @KevinHarvick. pic.twitter.com/LWD3QwbJ0q

“Keelan is saving me some work,” Harvick said. “Usually, when I get home, the next day we have to mock up a Victory Lane celebration. For him to be here and able to do that and be a part of NASCAR and bring your son to work and do all the things that we get to do with our kids, I have had him with me by myself the last three weeks and we have had a ball.

Still maintaining a 62-point lead over Harvick in the standings, Kyle Busch wasn’t entirely disappointed with his third-place finish at Michigan, considering he hasn’t had the best luck there in the past.

Our @interstatebatteries Camry was pretty close, wish we would have had just a bit more. Overall a good day for us, we’ll take it and head to Bristol. #NASCAR

?But yeah, it?s Michigan. Take that with a grain of salt. For us, this isn?t our best place, so we don?t necessarily think we?re going to come here and be a dominant force and coming out of here with a third is fine for us.?

Looking ahead to the August 18 race at Bristol, Kyle Busch is confident of his chances, since he’s been known to race well at the Tennessee track, but is also wary of Harvick’s past performances at Bristol.

?Certainly Harvick has been fast there, too,? Busch said. ?I think he won there a couple years ago. But obviously we?re kind of on a hot streak with Bristol. We love going there. I would like to think that we can go there, be fast and be able to respond, absolutely.?

Thanks for coming to see us race. 👍 #KidsDriveNASCAR #18N18 pic.twitter.com/5P9SABUjiV

That quote from Martin Truex Jr. pretty much summed up his performance at Michigan, after he spun out due to contact from William Byron, had a pit road penalty, and ran out of fuel before the end of Stage 2.

?We had a rough day for sure, everything that could go wrong, did,? Truex, who finished 14th in the cup race, told NBC Sports. ?We got wrecked early by a rookie mistake underneath us and then ran out of gas ? could have won the second stage, we just ran out of gas. The Camry was fast and we just couldn?t catch a break.”

“We kept losing track position and then we got a lap down. We never could get on the right end of things. We had a good car and that was cool because we worked hard on it today and we learned a lot this weekend.?

Watch: Kevin Harvick: ?Dear NASCAR?I Want to Be in Charge?