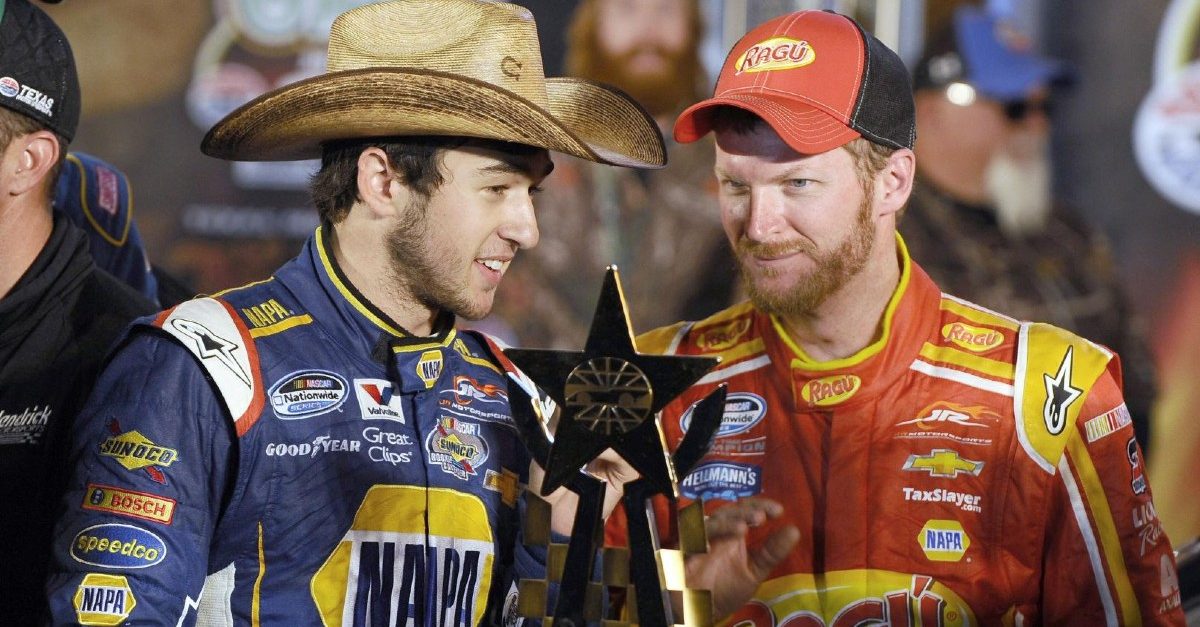 Chase Elliott has been called a number of things over the course of his career. When he was just starting out and relatively unknown, he was just the son of NASCAR icon Bill Elliott. Once he started to pick up some steam, he was being touted as one of professional auto racing’s rising stars. When he finally nabbed his first NASCAR Cup Series race win at the 2018 Go Bowling at The Glen race, some experts said he was even poised to be the next Dale Earnhardt Jr.

But, if you were to ask Junior himself what comes to mind when he sees the Hendrick Motorsports driver, he’d probably just say “Young Elvis.”

Dale Jr. has been referring to Elliott as “Young Elvis” for years now, but as Elliott has begun to have more of a profile, that name has only seemed to pick up steam.

At press conference in August 2018, ahead of the Consumers Energy 400 at Michigan International Speedway, Elliott insinuated that Junior should probably to stick to broadcasting and give it a rest with the nicknames.

What’s going on, No. 9️⃣? @chaseelliott is live in the media center at @MISpeedway. https://t.co/jLyA1yFGyQ

?I think he needs to retire from giving nicknames,” Chase Elliott said, according to For The Win. “For some reason, he?s always thought I look like Elvis, and I really don?t know why. I know he?s got a little bit of an obsession for Elvis.”

?I know he?s got an Elvis room in his house, which is kind of weird. I?ve been in that room before, and you wake up and there?s this Elvis man staring at you. So I don?t know if he just has a thing for Elvis or what. I don?t — whatever. I don?t think he?s qualified.?

Read More: NASCAR Hall of Famer Is Coming out of Retirement to Run Xfinity Series Race in #23 GMS Racing Chevrolet

Chase Elliott is certainly entitled to his opinion and probably has a lot of things on his mind going into race weekend besides corny nicknames. But, knowing Junior’s tendency to prolong a joke, we think that “Young Elvis” will probably be sticking around as a nickname for quite a while.

.@chaseelliott Your day is starting off right when you can get a selfie with this gem in the ATL airport! #CMTAwards pic.twitter.com/7ZpO8PtnFx

@ReganSmith looks like his moonlighting gig as an Elvis impersonator is catching up. He's available 4 birthdays & bachelorette parties.

@chaseelliott if you have the potential to moonlight as a Elvis impersonator in life, you don't think twice about it https://t.co/Kb4rv7Kw6v

.@chaseelliott so I could do it all over again. Plus he kinda looks like a young Elvis. Side job as an impersonator. https://t.co/195kZQA15z

I been thinkin’ he’s the new Young Elvis of @NASCAR. To me they even look the same. pic.twitter.com/ysFvXVxZSJ