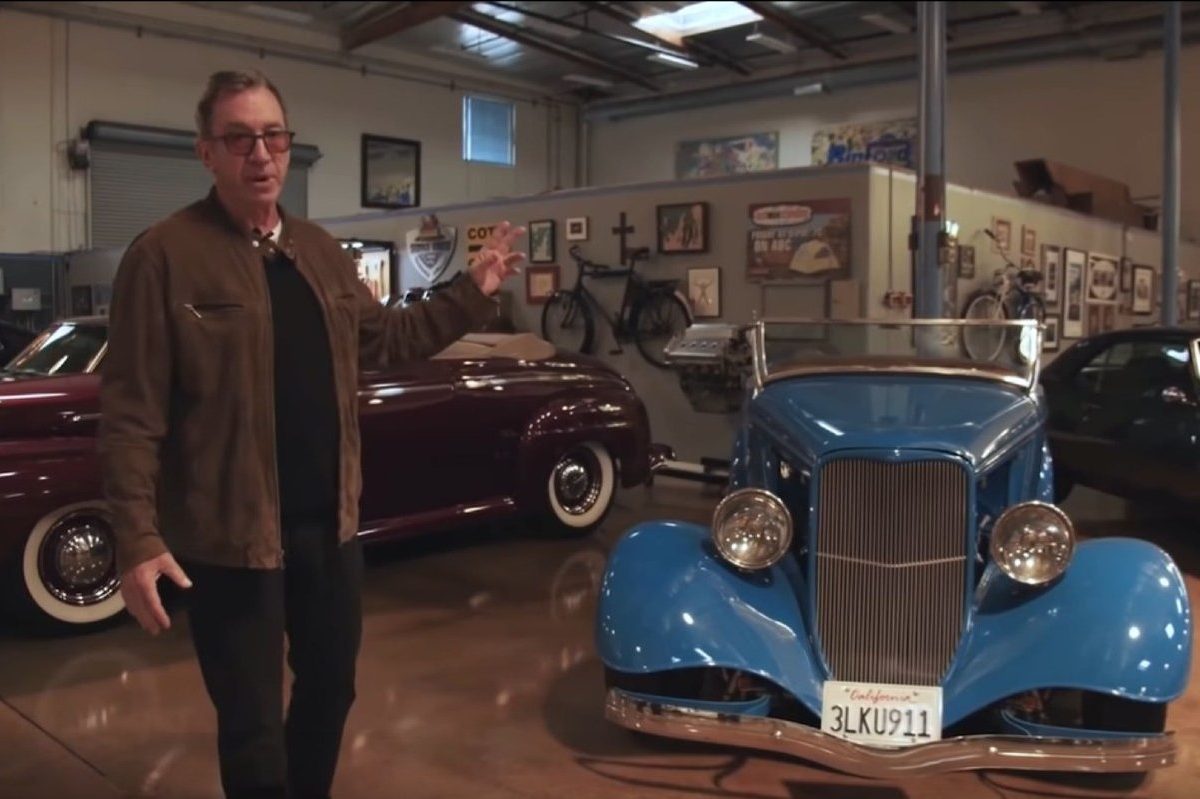 Some celebrities have the latest and greatest cars. Some have a collection of very personal restomods. Regardless of what fills their garage, you get the feeling that car enthusiasts tend to gravitate towards the vehicles that mean the most to them, and truly reflect their style.

Tim Allen is a Detroit, Michigan native with a background in racing. The star of the long-running sitcom Home Improvement, the voice of Buzz Lightyear in the Toy Story movie series, and most recently Mike Baxter in Last Man Standing, Allen has a pretty impressive resume.

Back in April, a film crew from the Petersen Automotive Museum stopped by his garage outside of Los Angeles to take a look at the beauties in Allen’s collection.

The number one thing that stands out about Tim Allen’s car collection is that it is exactly what you would expect from a Detroit, Michigan native with a background in racing.

Nearly every vehicle in his printing factory-turned sound studio-turned garage is there because he specifically sought it out for personal reasons. As he tours from one car to another, he explains the nostalgia that backed his purchase. In several cases, he explains that he can’t sell this one because he had the model, the remote control car, or the poster when he was growing up. He tells tales of seeing the really rich dads driving a Cadillac Brougham D’Elegance, and feeling that he would really have “made it” when he himself was driving one of the beasts.

Obsessed with trucks since childhood, Tim made an effort to find the first Studebaker sleeper cab truck offered. He’s actually driven it, with assistance from Jay Leno, who you may know from Jay Leno’s Garage. Oh, and The Tonight Show. But, back to the Studebaker, it’s got an unusual non-synchromesh up-and-down transmission, which is a full upper body workout, according to Allen.

And, yet, when the Petersen Automotive Museum stops by to take a look at his collection, he starts with his wife’s favorite rides.

First, there’s a 1972 Ford Bronco with no mods. Allen explains that he hates driving it, which seems unnecessarily harsh…until we discover what he really enjoys driving.

As he makes his way from his wife’s Bronco and her “bulletproof” Volvo P1800, Allen shows us his 1971 Volkswagen Karmann Ghia, which he purchased online. Mixed with a 1955 Porsche, which Allen insists is just a souped-up Volkswagen, this particular Karmann Ghia is sexy and sophisticated, just as it should be.

Moving along in the garage tour, Tim Allen shows off his 100 Year Anniversary McLaren-built Ford F-150. He claims that it “looks dated,” but there are probably few people who would pass up the opportunity to cruise around in that particular vehicle.

Tim Allen is a real-deal car guy. As the garage tour continues, he rattles off lists of improvements he’s made, including belts, hoses, and other gearhead bits and baubles that the average horsepower-collecting celebrity might not be able to put together. He has not only driven all of these cars, but he has actually worked on them, as well.

In fact, as Allen shows the audience his own favorite rides, he mentions casually that he worked on five prototypes with Cadillac, as well as a performance-based Impala with Chevy. His work to create an AMG version of a Cadillac essentially led GM to develop the Cadillac CTS.

And then, just as casually, he shows off his “American Truck Cars,” his fond nickname for muscle cars that have been given a too-big truck engine, along with this Chevy 409 bubble top.

Tim Allen becomes unusually philosophical about his Ferrari 330 GTC. “Porsches and Ferraris have to be driven hard a lot to behave,” he states, before admitting that he doesn’t drive his Ferrari nearly enough. In fact, Tim typically drives his Demon (a 1996 B-body Chevrolet Impala SS with a 5.7L V8 custom build) or his hopped-up Tesla, which he lovingly dubs his “Apple phone golf cart.” He continues to describe it with equal parts admiration and fear, “it has no moving parts. It’s kinda spooky.”

Bring on the Horsepower

Tim Allen raced for Ford for Trans Am for several years, and ended up with an obsession with track cars and rally cars. Unfortunately, none of that knowledge would transfer to the Ford RS200 sourced from England. Pulled from racing after a tragic and deadly accident in Germany, literally no one knows how to operate these vehicles. No one, that is, except Emerson Fittipaldi, who helped Allen find his pace at the track with this particular model from the 1986.

The Ford GT supercar is another mixed bag of pride and predicament. Allen explains that he had to complete a mountain of paperwork to get on the waiting list for the GT, not knowing what he was going to get or how much it would cost. Still, he feels that “in its element,” there truly is no better track car than this.

There are also some holdovers from when Allen used to street race in Detroit, including a Pontiac GTO Ram Air IV drag car with honeycomb wheels, which Allen toned down a little for daily driving. In fact, he loves driving it, specifically due to the tight feel and response of the variable ratio power steering feel. See? He really is a car guy.

Ever wonder what happened to the two hot rods Tim “The Toolman” Taylor built on Home Improvement? For those looking for a little boost to trivia night, the first one was a blue ’33 Ford Custom, and the second was a ’46 Ford Custom. The duo lives with Tim Allen, and you’ll be thrilled to know that they really are working hot rods, and Allen really did work on them. He calls the ’33 a learning experience, and commented that the ’46 was taken apart and put together so many times for different takes on the show, that he feels a pretty deep connection with it.

But, the Toolman’s two hot rods aren’t the only fruits of his labor. When he was lending voice work to Chevrolet, part of his agreement involved a Chevrolet Camaro SS 427 small block. Though it looks like a 1968, it’s actually endowed with an incredible amount of modern tech from the chassis up.

And so it continues, as Tim Allen strolls from one 1968 Camaro 427 Copo to another turbo sports car. What stands out most is his personal connection to each and every one of them. He can tell us what it’s like to set one up, and how it performs. He lists through the various ailments of some of his cars, and what he’s done to “cure” them. He stumbles over lingo like “restomod,” but can deftly explain what parts came from what car to make the custom vehicle in his garage.

He’s basically just one of us. Well, one of us with a lot of cars that “go like Squirt,” as he’s fond of saying.