Technically, Jay Leno is retired from television. At least, that's what we were supposed to think when he stepped down from his role of hosting The Tonight Show in 2014.

But, as even the most casual late night TV show watcher can attest, Leno is completely devoted to his collection of rare items with engines. In addition to his magnificent car collection, he has a truly impressive motorcycle collection.

From super speedy racers to one-of-a-kind items, Jay Leno's Burbank, California garage is one place many gearheads would love to visit. And, with his CNBC show, aptly named Jay Leno's Garage, fans around the world can check out the mind-blowing array without leaving their homes.

Wait, I Thought Leno Was A Serious Car Guy

You are correct! Jay Leno's car collection has shown up on all sorts of TV shows. From the History Channel to other late night television programs, Leno has been long considered an icon in the automotive collecting world.

At last count, the 122,000 square-foot garage was home sweet home to 180 cars and 160 motorcycles. Even more impressively, it's clear to audience members that Jay Leno truly cares about each and every vehicle in his collection, regardless of the number of wheels. He still has -- and occasionally drives! -- the 1955 Buick Roadmaster that he drove on his first date with his wife. It lives not far from the $12 million McLaren F1, of course.

He's got lots of great stuff in there, including the 1906 Stanley Steamer Vanderbilt Cup Racer, in which he famously received a speeding ticket. That might be a fist for a steam-powered vehicle in Los Angeles. There's also the pioneer of biofuel, a 1963 Chrysler Turbine Car that runs on any combustible good.

Of course, if it's good ol' fashioned horsepower that gets your blood running, the 1000-hp engine in the 1966 Oldsmobile Toronado should do the trick.

But, enough about the cars-- we're here for the motorbikes! 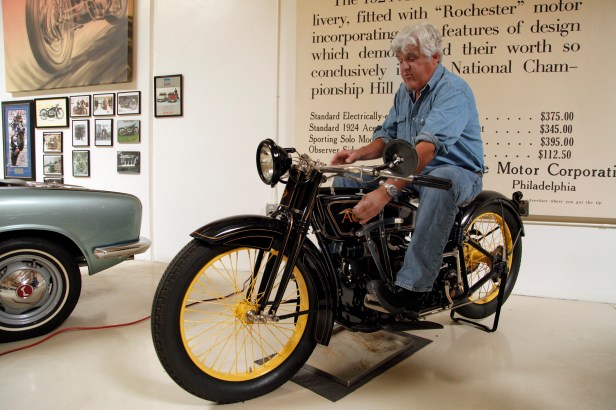 But, one very special part of his collection only just made its television debut in 2020 on Jay Leno's Garage.

As the story goes, Robert White had an immense collection of Brough Superior bikes. Original Brough Superior motorcycles were produced between 1919 and 1940, and have long been considered the "Rolls-Royce" of the motorcycling world. Historically speaking, one could purchase a brand-new Brough Superior or a brand-new house for about the same price.

When Robert White was diagnosed with terminal cancer, he sold his entire collection to Jay Leno for two reasons: First, because he knew his collection would be in the best hands, and also so that he could donate the proceeds towards founding the Robert White Cancer Centre in Dorchester, England.

Brough Superior bikes were considered "superbikes," with models like the SS100 able to hit 100 miles per hour. While early models were constructed without a throttle, requiring expert balance between fuel and air via handlebar controls, later models were solid and comfortable, with improved suspension and Matchless engines. 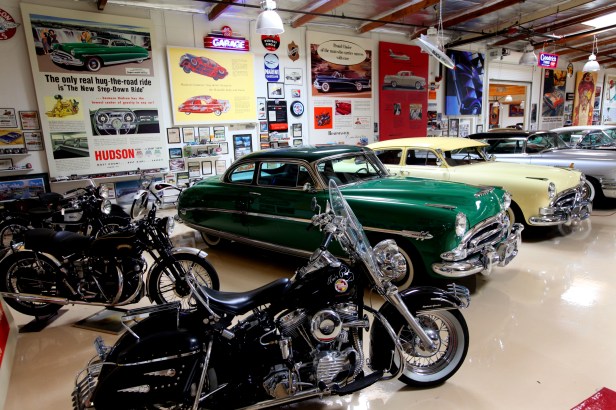 How Do I Get a Peek In Jay Leno's Garage?

Sadly, we can't just walk into Burbank and ask for a tour. But, eternal television host Jay Leno does let viewers take a look into his personal garage -- as well as those of other celebrities -- in his eponymous show Jay Leno's Garage. Older episodes can be found online via YouTube or CNBC's program site.

Of course, as synonymous as "Jay Leno" and "Car Collection" are these days, it's not too hard to get a glimpse of some of the fun restos and custom vehicles that grace Leno's world-famous collection. Thank goodness.