Ford F-150 Lightning: Everything You Need to Know 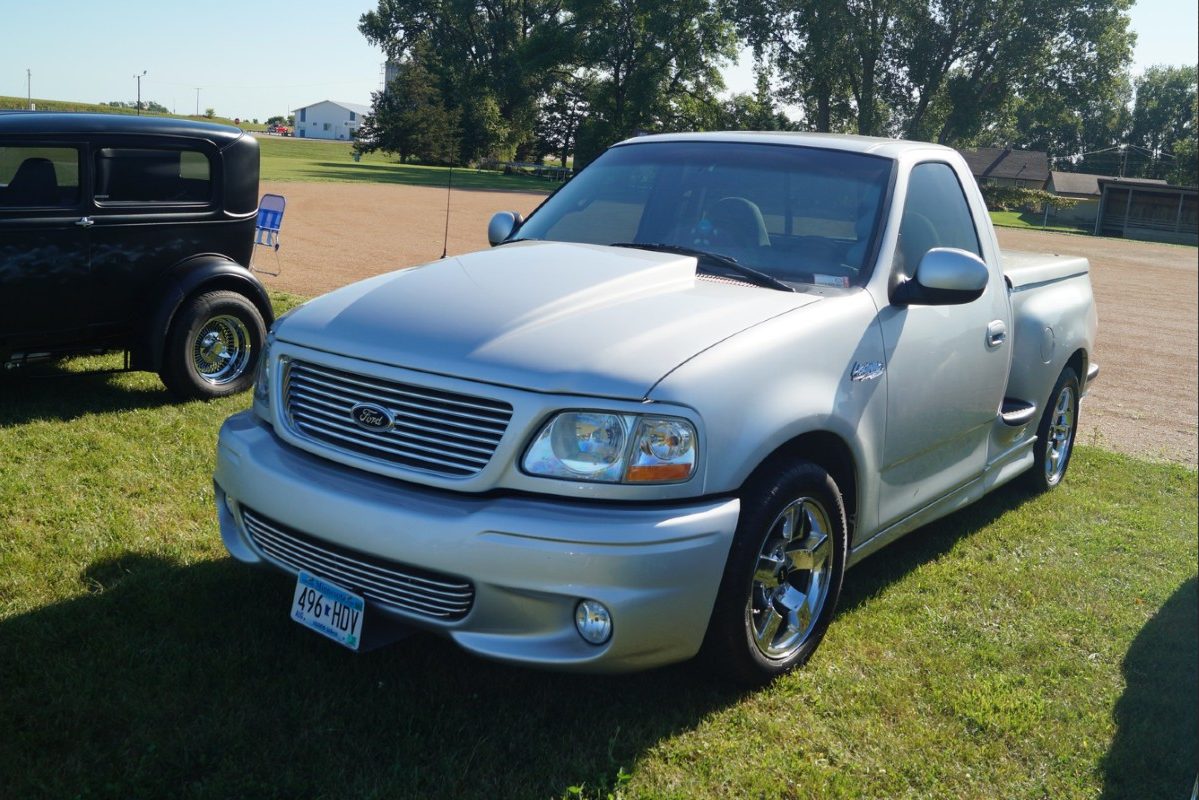 These were the four tenets of the Ford Special Vehicle Team. Assembled in 1991, this was a team of dedicated drivers with engineering, design, marketing, and product skills. Their goal? To create high-performance, limited production vehicles for hardcore, passionate drivers.

The designation “SVT” was given to the models churned out by this team. Two SVT vehicles were offered in the 1992 model year: The SVT Mustang Cobra and the SVT F-150 Lightning.

This is the story of the SVT Lightning.

The first Ford F-150 SVT Lightning made its debut at the 1992 Chicago Auto Show. The pickup truck hit the market in February 1993, dressed to impress in red or black paint only.

The concept behind the SVT offerings was to create a very specific type of vehicle, so driver choices were very limited. The first Ford Lightning models were offered with a standard cab and short bed only. Under the hood was a 5.8 L Windsor FI V8 engine that provided 240 horsepower and 340 lb/ft of torque, paired to an automatic transmission.

The first Ford Lightning included an array of F-series firsts, including a true dual exhaust, power-adjustable bucket seats, 17-inch aluminum wheels with Firestone Firehawk tires, and fog lights intelligently integrated into the custom front air dam. Though over 5,000 Lightning pickup trucks were produced in the first year, they were truly unique when compared to the rest of the Ford trucks.

The first generation was produced from 1993-1995, and the second generation reappeared in 1999. This time, the Lightning was ready for pure performance.

This generation of F-150 Lightning could travel from 0-60 miles per hour in 5.8 seconds, with 360 horsepower and 440 lb/ft of torque coming from the 5.4L Triton V8 engine with an Eaton supercharger.

In 2001, this engine got a performance makeover, raising the horsepower to 380 and the torque to 450 lb/ft. Car and Driver test drivers took this version of the SVT Lightning from 0-60 MPH in just 5.2 seconds, proving that the upgrades did exactly what they were intended to do.

Through the years, the air-intake manifold was improved upon, and the new Lightning was given Bilstein shocks in the front and rear, 18-inch alloy wheels with Goodyear Eagle tires, and a dropped suspension.

How Cool Was the SVT Lightning?

Throughout its limited production, the Ford F-150 SVT Lightning remained a vehicle of few options. The standard cab with step-side regular bed remained the only configuration. 1999 models were offered in red, black, and white, though silver was added in 2000. Ford tried a darker True Blue in 2002, which was replaced by the much lighter Sonic Blue in 2003. Dark Shadow Grey joined the lineup that year, as well.

Inside was 60/40 split bench-style cloth and leather seats, with the SVT logo embroidered on the seat backs. The center console could be folded back for added room.

So, What Happened to the SVT Lightning?

Production of the Ford F-150 Lightning ended with the 2003 model year.

While the payload max had increased to 1,350 pounds, and the towing capacity was on par with the rest of the Ford F-150 lineup, most people don’t require a street race-ready pickup truck that can hit 147 miles per hour in their daily driving or work life.

While Ford put some effort into creating a third generation of the SVT Lightning, it never hit the dealerships. There were far too many braking and physics-related engineering issues involved, so Ford followed their drivers’ needs and turned their attention to the off-road beast, the Ford Raptor instead.

The Ford F-150 SVT Lightning is still beloved by Ford enthusiasts. It’s rarity only compounds the fascination with the model. Between the two generations, only around 40,000 models were produced. In comparison, the rest of the F-series sells about one million units per year.

Ford has been known to revisit their more successful ideas from time to time, so it’s not impossible that the Ford Lightning will return to the F-150 lineup in the future. But, in the meantime, if you see one, be sure to give it the respect it deserves.

WATCH: The ?32 Ford Deuce Coupe in ?American Graffiti? Is an Unforgettable Movie Car