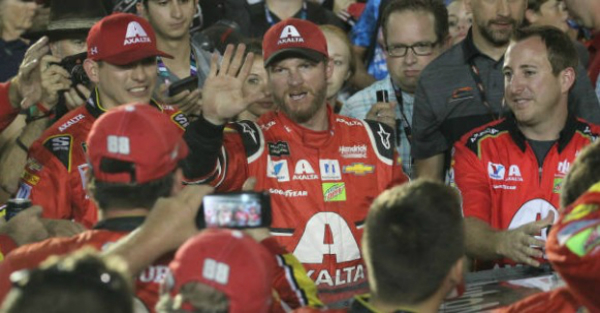 With the final race in the books for the eminent career of Dale Earnhardt Jr., there have been tons of memorable moments.

Although he didn’t win a race in his final season, there were some moments that stand out. From his final top-five finish, to the plethora of tributes that were bestowed upon him, here are a few of our favorites from Dale Jr.’s final season.

RELATED: Regan Smith believes we’ve been watching two no doubt Hall of Famers on the track

Probably the best and most fitting, was the party on the track where he got to throw back some cold ones with the ones closest to him. Being able to share his love for two of his favorite things, cars and beer, with his team, is all he could think about.

“So, I told them the one thing I want to do is finish the race and have some beer ready and we’re going to drink a beer together,” said Earnhardt. “That was the only thing that kept coming to my mind about what to do when I get out of the car. Well, I want to have a beer with my guys. I want to have a moment with them that sort of closes it up for us. Some closure, I guess.”

The show of admiration and respect he received from all the pit crews, as he made his way down pit road prior to starting his final race goes to show you how well respected he is in the sport of stock car racing. It’s a sport he’s been around nearly his whole life, and one he will probably be affiliated with for quite some time.

Texas Motor Speedway will always be a special place for Dale Jr., not only was it the track where he recorded his first victory, it’s also one of only two tracks where his legendary father got to see him capture the checkered flag. Prior to his final race, he was honored by being inducted into the Texas Motorsports Hall of Fame. He finished fifth there earlier in the year, for his highest finish of the season.

In his final race at Talladega, he captured the pole for the first time at the legendary track where he’d won six races. In a season that didn’t see him finish higher than fifth place, he hoped qualifying on the pole would help propel him to victory lane. He narrowly avoided crash after crash, but still managed to escape unscathed. He even garnered a few penalties, but despite the setbacks he manged to stay competitive. Ultimately he fell short, finishing in seventh place. But he gave the fans their moneys worth, as they cheered and screamed each time he moved towards the front.

Former sponsors and other various companies showed their support for Earnhardt with tributes to say farewell. Of those one stood out above the rest. Budweiser, a company that was synonymous with Dale Jr. for the early part of his career, released a heartfelt tribute video, that would make even the manliest man tear up.

While Earnhardt is saying goodbye to the Monster Energy Cup Series, he’s not saying farewell to the sport. He’ll still be involved as an owner and also has plans to drive in a few Xfinity Series races. These were just a few of our favorite moments from his final season, which one is your favorite?