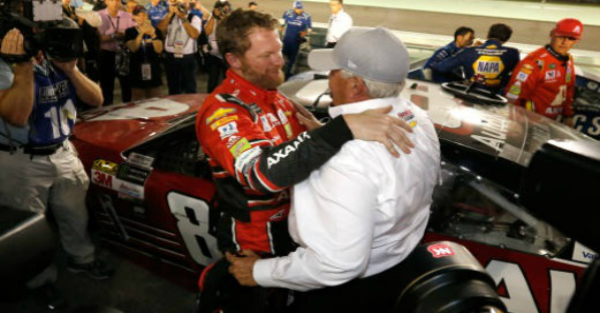 In the illustrious racing career of Dale Earnhardt Jr., he has raced for his legendary father and Rick Hendrick.

He began driving the No. 88 for Hendrick Motorsports in 2008 and did so through his final race at Homestead. The men have a close bond, as evident by Hendrick’s part ownership of JR Motorsports with Junior and his sister Kelley Earnhardt Miller.

But that bond goes much, much deeper, as Dale Jr.’s remarks clearly showed.

RELATED: Watch everyone on pit road pay tribute to Dale Earnhardt Jr. before his last race

After climbing out of his car at Homestead — for the final time in his racing career — Junior grabbed Hendrick in a bear hug and held on  tight.

“I got very emotional talking to Rick, he’s been like a father to me,” Earnhardt said. “It’s easy to tell him thank you for making me a driver for your team, thank you for hiring me. it’s easy to say those things.”

“But trying to thank him for being what he’s been to me as a person and a friend and a father figure was very hard,” he said.