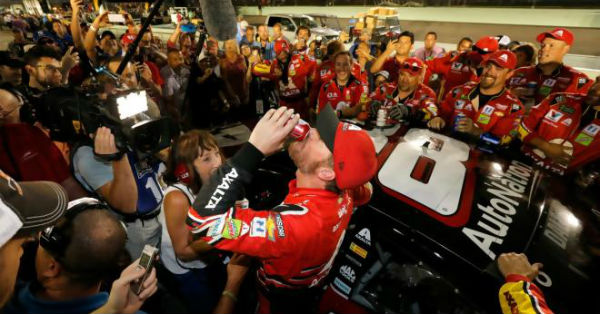 After finishing his final race at Homestead, Earnhardt got to celebrate with his extended racing family. Earnhardt spent nearly an hour on the track after the checkered flag dropped, while he and his friends threw back some cold ones.

“That’s why I kept saying I hope I finish all the laps,” said Earnhardt of the party, according to racer.com. “I know it sounds ridiculous, but that’s really why I was saying it. Everybody (asks) what are you going to miss the most and it’s my family. That’s my family. We are so close.”

If there are two things Dale Jr. loves it’s cars and beer and on the day of his final race he shared his love of both with the people that mean the most to him.

“I’ve been around this sport where it’s been hard to feel like someone believes in you but I’ve never doubted any of these guys’ belief in me as a driver, and that’s so important when you’re a race car driver,”  Earnhardt said

“So, I told them the one thing I want to do is finish the race and have some beer ready and we’re going to drink a beer together,” said Earnhardt. “That was the only thing that kept coming to my mind about what to do when I get out of the car. Well, I want to have a beer with my guys. I want to have a moment with them that sort of closes it up for us. Some closure, I guess.”

Throughout his life, Earnhardt has partied with the best of them. So, it’s only fitting that the party after his final race was shared with his nearest and dearest friends.