A forgotten race track can settle the new vs old debate 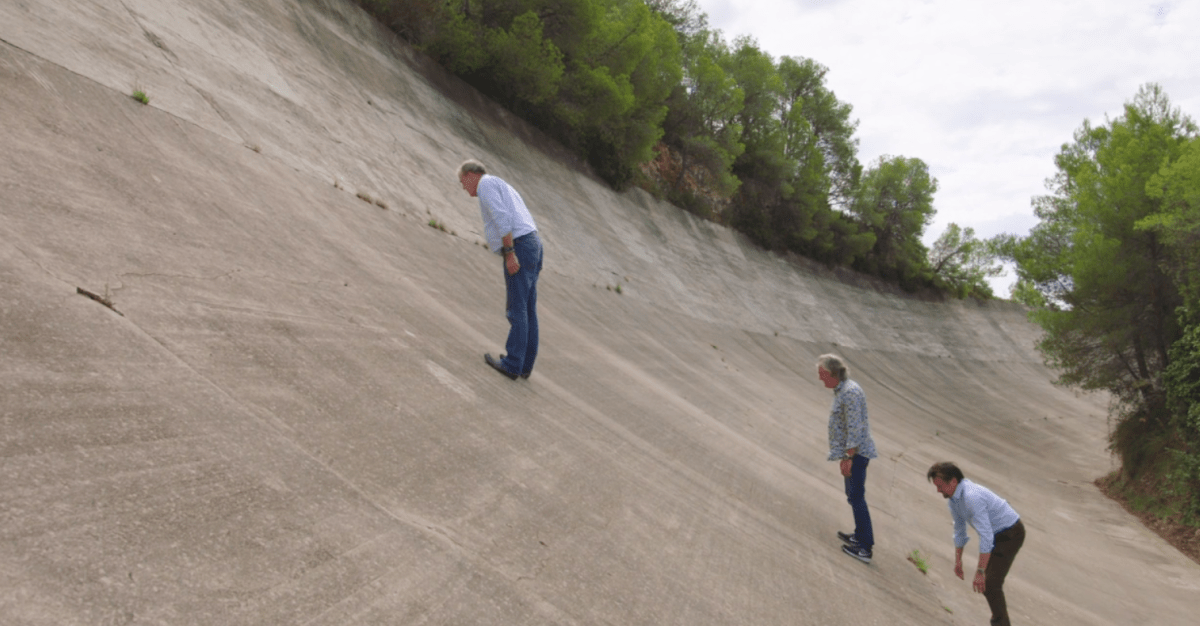 The Grand Tour Season 2 Episode 8:  Blasts from the Past

The episode opens right up with the feature film. Richard Hammond shows up in a 1957 Jaguar XKSS. Except, it is not quite a 1957. Since a fire in the factory cut short the original production run of the road going version of Jaguar’s Le Mans racer, Jaguar decided to finish the production in 2016. Since the original plans were lost in the fire, Jaguar had to reverse engineer everything to make sure the 2016 version was built exactly as the original version was.

Jeremy Clarkson joined him in his own brand new-vintage car: an Aston Martin DB4 GT Lightweight. In the late 50’s it was the fastest car in the world, and this recently-built version has an even bigger engine.

They go to Pau, France to run one of the earliest race courses in existence. While they revel in their car’s beauty at a café, they notice a car that they say exemplifies the over-styled ugliness of modern cars: The Honda Civic Type-R. Then James May steps out of it.

Claiming that newer is always better, May says his Honda would prove that modern cars are better in every way, except looks. He tries to prove it by challenging the two to a drive around town.

Hammond and Clarkson have to admit their cars are hard work to drive on the street without synchros, heavy clutches and steering, and no air conditioning. Then they goad May into flying by in the Civic on a section of highway known for having very strict police. Luckily for May, but sadly for the rest of us, there were no cops in sight.

On conversation street, the three briefly discuss the folly of letting the public vote on naming anything, the pointlessness of animal vs car races and the unfortunate images that come to mind when hearing the name of the Lamborghini Urus.

They also examine the strange (To their British minds) popularity of Ford F-150s. They correctly point out that Ford F-150 drivers will never care about the hybrid version.

Last time the Ford GT showed up on The Grand Tour, it was only used on the streets and Jeremy couldn’t get the most out of it. To fix this, they took it to a track. Clarkson says the sound is terrible and the power number isn’t staggering, but without the weight of a V8, it is still great on a track. With a 0-60 time of 2.8 seconds, Clarkson figures the Ford GT is too hardcore to be bought by posers.

However, he also feels that the car is soul-less. On the test track, it finished faster than a McLaren 720S but slower than the cheaper Lamborghini Huracan Performante.

This episode, they aim to find the fastest drummer from a band starting with the letter ‘P.’ So, they bring on Stewart Copeland of The Police and Pink Floyd’s Nick Mason.

Copeland’s dad was a CIA spy and Mason’s dad got him into cars to a point that he doesn’t even know how many cars he currently has in his collection.

Unsurprisingly, the man with the collection of rare racing cars beat the man who couldn’t care less about them, with Mason completing the course in 1:21.3 and Copeland taking 1:24.2.

Back to the feature film, Hammond found a way to secure his roof-less, lock-less car overnight at the hotel by spending all night standing by it. On a drive through the mountains, the old cars were terrible and uncomfortable to drive at slow speeds in the cold. A thick Fog took visibility down to zero and Hammond’s Jag broke down. After losing his parked car in the fog, and accidentally interrupting a couple’s alone time while looking for it, Clarkson left Hammond to repair the Jag while trying to convince May that nothing had happened.

Once the fog lifted, Jeremy’s Aston worked much better, thanks to the fact that he could drive it the only way it liked: hard.

They crossed into Spain and took their cars to Autódromo de Sitges-Terramar, the oldest surviving banked oval track in all of Europe. The track was used in 1923 and has banks up to 78 degrees.

After Clarkson drilled holes in the windows of his 1.5 million-dollar Aston Martin, the three took practice laps on the oval for a challenge. The track has been abandoned so long, it is bumpy and filled with pot-holes, and it is clear that the contest will be less about the cars and more about who has more guts to fly around the sketchy track.

Hammond dropped out of the contest because he wanted to live, so Clarkson and May were left to try to achieve the highest speed by the end of one of the turns.

May and the Honda did 93 mph while Clarkson and the Aston did 89 mph. The Civic Type R was the winner, which is not surprising when you saw how rough the track was. Having adjustable shocks was the biggest advantage in this challenge.

It was weird to see May as the defender of the modern, but the other two presenters were quick to point that out, turning his apparently contrarian take into a running joke. Seeing the Ford GT on a track where it belongs was a treat, and the guests were genuinely interesting. The historic locations and the incredible banking of the oval were enough to make this episode one of the better ones. We weren’t on the edge of our seats like during the skiing film in a previous episode, but there were plenty of moments that made us gasp, ‘whoa!’

“It’s not as revolting as what’s gotten out of it” -Jeremy Clarkson describing his hatred for the Honda Civic Type-R… and James May.