The Grand Tour takes on Gymkhana, fake hot hatches and the super rich 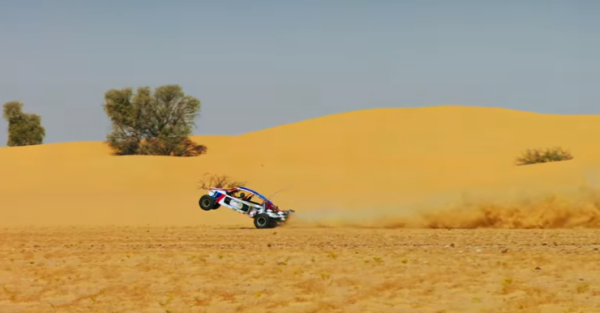 The Grand Tour Season 2 Episode 5: Up, Down and Round the Farm

Toys for the Rich

First up is Richard Hammond in Dubai to examine the kinds of toys the mega-rich oil barons buy themselves.

Driving a 1,500 horsepower sand rail in the desert, Hammond pulls wheelies at will. With its immense power and paddle tires, it can do 0-60 mph in three seconds? on the sand!

He then moves on to a rubber tank-treaded ?car? called a Rip-saw. Each one is custom built and this example costs 300k British pounds by the same company responsible for some of the custom Fast and Furious cars. Since it is impossible to park in any normal spots, Hammond decides to just drive through the mall in his tank, busting through the walls.

He then gets it out in the sand where it is even more insane than the sand rail. As the fastest tracked vehicle ever built, it has no problem tearing up dunes, and can climb a 75% grade compared to the 45% of a Land Rover Discovery.

Richard, Jeremy and James discuss the ?new? Bentley Continental GT that looks nearly identical to the old version, they poke some fun at Lewis Hamilton while talking about the AMG Project 1 and Clarkson complains about the upcoming BMW 8 series? V12 engine.

An all-electric self-healing Lamborghini and a Renault pickup truck are similarly dissected before the most fitting description ever was made of a Dodge Challenger Demon. Clarkson says the Demon looks like a T-Rex with its drag radials in back and skinny tires up front. Try NOT seeing that from now on whenever a Dodge Demon is wearing its drag setup.

James May thinks Hot hatches are getting out of control. The new class of hot hatches are all breaking the 300 Hp mark. May thinks the original hot hatch spirit has been lost. To get back to the feel of the first Golf, May says the new VW Up! GTI is the answer.

It only has 113 hp and is ?proper fun? to drive. You get a surprisingly good sound out of its one liter three-cylinder turbo engine for half the price of the current Golf GTI. The Up! ended up being the slowest car on their test track, but May still argues it is everything you want in a hot hatch.

This episode?s celebrity face off wanted to settle the age-old question of who is the fastest person who has a failed previous career in a band? They brought in Dominic Cooper and Bill Bailey. Both told stories of their beloved older cars before the laps were shown.

Dominic Cooper had a spin in practice but powered out, and was similarly sloppily in his real lap but ended up with the faster time by a good margin. Cooper ended up winning by a second and a half with his 1:23.6 to Bailey?s 1:25.1

A “Skidding About Film”

Jeremy Clarkson unleashes his hottest take of the episode when he takes on Gymkhana, as made famous by Ken Block. Clarkson says anyone can make one of these films, arguing that it?s mostly just editing tricks. Obviously, Clarkson sets out to make his own ?skidding about film.?

Called ?Farmkhana,? the edit looks pretty convincing. There are some hilarious moments, like the clip of his footwork, which can be described as just wiggling his feet about the pedal box. Each cut reveals more and more damage to his car, giving hints to the fact that previous tries at each stunt did not go as planned.

Hammond and May then begin to show the REAL story of what went on. The unedited version shows him just goofing off with the car stopped to get the B roll clips. Once driving, he looks like a bull in a china shop trying to do the barn donuts, smashing into everything in sight.

The drift through the gate took 3 tries with him smashing into the gate or a ditch each time before the crew gave up and put a pro driver wearing a mask in the car to get the shot. 11 sheep and a windshield later, it is clear that the Gymkhana driving is a bit trickier than Clarkson thought.

Hammond blasting around the desert in insane Dubai toys could never get old, as the sheer ridiculousness of the vehicles keeps your jaw on the floor. The VW Up! Film made a lot of good points about the spirit of lightness and simplicity has been lost from hot hatches, but we can?t agree that an Up! Will ever be more fun than a Golf, despite the great price. Jeremy?s Farmkhana edit was absolutely hilarious, and we didn?t even mind the obvious air cannon when the rolled the car at the end. Scripted bits are often boring, but destruction can easily make up for it.

?You just need a pretentious opening with some smoke, and then lots of shots of me looking heroic.?

-Jeremy Clarkson explaining how to create the perfect Gymkhana edit.