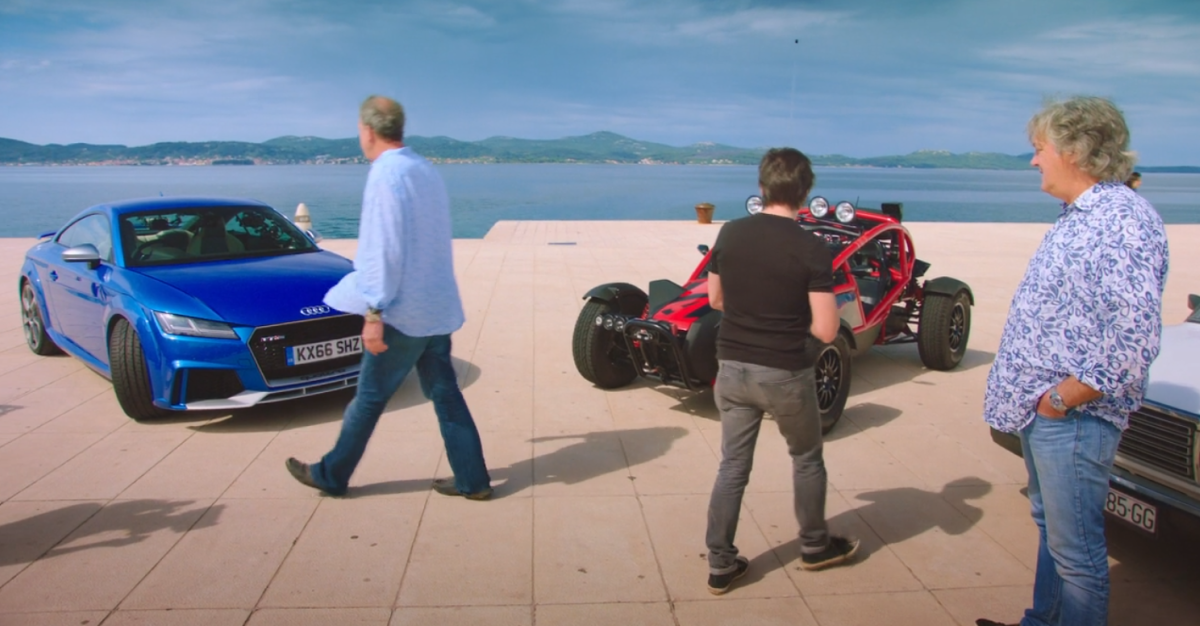 The episode opens with a film about the McLaren 720s driven by Richard Hammond. Immediately Hammond is all about the looks of the latest McLaren offering, saying it finally has the looks to back up the performance. Which is saying something considering the 720s uses 710 horsepower to get to 60 mph in just 2.8 seconds, besting it?s competition from Lamborghini and Ferrari.

The coolest feature is the ?variable drift control? that changes the traction control by selecting the specific slip angle you want it to allow. All that performance, plus a drift mode, yet Hammond notes that it is still actually comfortable in comfort mode.

After a rave review, though, the 720s did a 1:17.9 around the track which is the exact same speed as the 650s it replaces. While Hammond surmised it came down to tire choice, James May and Jeremy Clarkson offer up the alternative: that it isn?t any better than the car it replaces.

This episode, the trio gives out some end-of-year awards.

The worst rear end went to the Land Rover Discovery and its off-center license plate.

The car you like but know you shouldn?t was the Corvette ZR1. This one was explained by the fact that anyone in their right mind would want one, but wake up the next morning and realize how it makes them look. Which in Britain, must be a bigger issue than here in the states.

The lack of continuity award went to Hammond for switching entire cars mid-film. During the McLaren segment, the first car was destroyed when Hammond accidentally filled the car with water that was in a gas can. The destroyed McLaren makes him 2 for 2 for destroying supercars this season.

Unscripted and off the rails

Addressing complaints of previous films being too scripted or set up, the three presenters aim to film an entire segment without any set ups, scripts or scouting of any kind. The only thing they planned is that they would meet in Croatia.

Jeremy showed up in an Audi TT RS but struggles to think of a good metaphor for the car on the spot when Hammond shows up in the TT?s polar opposite, and Ariel Nomad. If those cars weren?t mismatched enough, James May showed up in a Lada that he was convinced he would turn into a fire truck.

After a fan interrupted to take a selfie, they all took off in separate directions since they didn?t have any planned destination.

Jeremy continues his struggles to find descriptions, this time for the engine noises his Audi makes. Then Hammond finds him and starts a race, but without location scouting, they realize they picked a dead end.

They went to an airport to drag race but couldn?t get permission to use the airfield without advance warning. When they finally find a place to race, Hammond snaps a driveshaft on the Nomad so Clarkson went off with the pretty local woman they found to start the race. Once they returned, the real race saw the Audi beating the Nomad much to their ?impartial? local?s delight.

Elsewhere, James had gone about turning his cheap Lada into a fire truck, insisting that was the point of the episode. Unfortunately, without a staged fire, he couldn?t show off his work. So, he then started his own fire in a trash can.

This time, two British singers were brought in. Each singer had connections to the British automotive industry. Boe confirmed a rumor that TVR?s came with hidden messages underneath the trim and paint, usually rude messages for the paint shop. Their laps were particularly British, with a damp track and fog, where Ball beat Boe by a second.

Back to the main film of the episode, the next unscripted item on the docket is an offroad rally race. Once the pair finally find a dirt track where the nomad is at home, the timing is handled by the same local woman from before, who is clearly enamored with Clarkson at this point.

The Audi?s 4wd and power should not be enough to make up for the weight and suspension travel disadvantages, but the biased timer says Jeremy?s TT RS won by a second.

Despite the TT?s lack of street cred, and Jeremy fumbling to describe it at every turn, he still thinks the RS is a totally different animal than the flight attendants car its reputation would have you imagining.

Hammond believes the nomad is utterly pointless but an absolute blast to drive, and that is the highest compliment in these circumstances.

Meanwhile, James May has put out someone?s bbq and keeps trying to compare to the other two?s fire trucks to his own, even though they aren?t participating in his one-man challenge.

To set a ?realistic? demonstration of the fire truck, Clarkson and Hammond set a fire in the weeds. When captain slow finally shows up to the fire, it was out of control and the real fire brigade had to come with an airplane. The ensuing deluge put out the fire, and destroyed the Lada along with it.

The Grand Tour writers must have read our last review because, after complaining about how the segments felt staged and stale, they gave us an episode totally devoid of a script. They made their point, with Jeremy struggling to find his words on the spot, random interruptions ruining segments and a lack of a coherent story with the three presenters freestyling.

They did a bit of an overcorrect, however, as we would love to have seen a planned challenge, with scouted locations and proper permits, just with some more ad-libbing in the presenters? interactions. Actually, it sounds like we are describing their usual road trip/adventure episodes. Which makes sense, because we would watch an entire series of those and give it five stars every time.

A good episode that made its point, but in doing so, left us a bit bored at times.

Quote of the episode:

?James May applied for a job at McLaren and they turned him down for being too slapdash? ? Richard Hammond describing McLaren?s obsessive attention to detail.