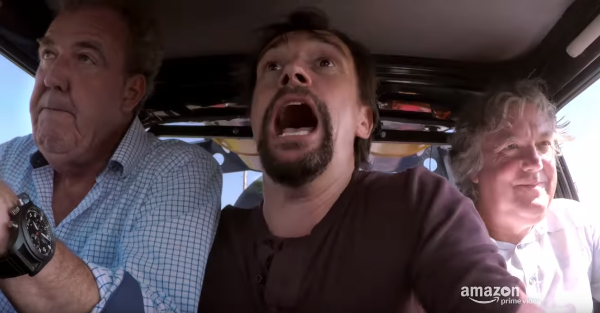 We’re just happy this is happening at all, the fact that season two looks amazing is just icing on the cake. At this point, Jeremy Clarkson, Richard Hammond and James May are car show royalty. Most of us will tune into anything they do, and season one felt like it took advantage of that fact occasionally. But, if the official season two trailer is any indication, they are ready to give us the show we crave.

The best parts of The Grand Tour, and even The Show That Shall Not Be Named before it, were always the three presenters just being their idiotic selves together in some absurd driving situation. Celebrity interviews, track tests, and studio segments are fine, but the specials were always the highlights of the show. By definition, each episode can’t be a special, but watching Clarkson slowly slide out of control down a snowy mountain while hanging out of a Jaaaagg reminds us of the greatest, fear-filled moments of their previous work.

Judging by the rest of the trailer, what we have to look forward to is the typical supercars in exotic locations, junkers trying to survive off road and, of course, amphibious cars. That recipe has never let us down before.

Season 1 of the Grand Tour was good, but had a few things that held it back. At best, the show was an adventure with the three longtime buddies on our TV. At worst, it felt overly scripted and stale. Luckily, all the changes that have been teased for season two are addressing those concerns head on.

First, the tent will not be traveling. As a move to both cut costs and accommodate the aging and accident-prone hosts, the traveling tent that served as the studio in a different location for each episode will now just be a permanent tent that serves as the studio. A minor change that will likely have zero effect on those watching from home, but allowed the season to happen in the first place.

Also, The American is gone! In season one, each regular episode had an entire segment devoted to the embodiment of Clarkson?s once amusing American stereotypes, played by 1995 NASCAR Truck series champion Mike Skinner. The result ruined what should have been some of the more interesting segments of the show: track tests. Skinner announced he would not return to the show and, nothing personal against Skinner, season 2 will be improved because of it.

And finally, no more celebrity brain crash. Celebrity brain crash was supposed to be the interview portion of The Grand Tour’s first season. The first time the segment appeared was a great bit. The celebrity, on their way to be interviewed has a horrible ‘accident’ that keeps them from showing up. The hosts would riff for a while about the demise of a beloved celebrity before moving on like nothing happened. The clever misdirection was great for the studio audience, but for those of us at home, each subsequent bit grew more tired. We are happy to see it go, even if we have no idea what they will replace it with. They have said they will have celebrities on for season two, but they will presumably not be killing them. We hope.

Adding to our excitement and relief is the fact that the second season almost didn’t happen at all. Filming was riddled with accidents and delays, and how the show adapted to accommodate these issues will be the most interesting sub-plot to the season.

All three presenters spent time in the hospital during filming. Richard Hammond had the scariest incident directly related to the show when he drove a Rimac Concept One off an embankment. He was knocked unconscious and pulled from the wreckage just before it burst into flames. His co-stars said they thought they had witnessed Hammond’s death. Since, thank god, they did not, the whole incident will be included in the show and is sure to be one of the realest, scariest moments of the season. Hammond was also in a motorcycle accident during filming. The nature of these exotic filming locations made the accident even more concerning due to the distance to the nearest medical facilities.

The other two presenters were luckier, but just barely. James May and Jeremy Clarkson were hospitalized for food poisoning and pnemonia, respectively. The timing of Clarkson’s very serious illness coincided with one of Hammond’s recoveries and meant only May was available for filming for a time. Somehow, the show went on, and now that we know all three are doing fine, we can’t wait to see the creative solutions the show came up with to finish the season.

The success of The Grand Tour comes down to the presenters. We would watch almost any show revolving around cars, but the chemistry between the three makes for TV that is enjoyable to a more general audience than just car nerds. It helps that the three are genuinely friends.

The lovable oaf began headlining Top Gear way back in 1988 and is credited with revamping the show into the global phenomenon it is today before being fired after reportedly getting into a physical altercation with a producer. His ouster led his two friends and co-hosts to quit as well and opened the door for The Grand Tour.

Hammond joined Top Gear in 2002 when the show began its new format. He is often teased for being a closet American by his fellow British co-hosts, and is the resident motorcycle lover.

May first appeared on Top Gear in 1999 and became a co-host when the show was re-worked. Known as Captain Slow, May has a more conservative approach than the Ham-fisted Clarkson and the sometimes reckless Hammond.

With the American gone, the hosts have been interviewing replacement drivers to test their cars. These interviews have predictably been disasters, and we are excited to see who they landed as a full time driver to test the cars around their track. Skinner was a fine driver, but the character they wrote for him to play will not be hard to improve upon.