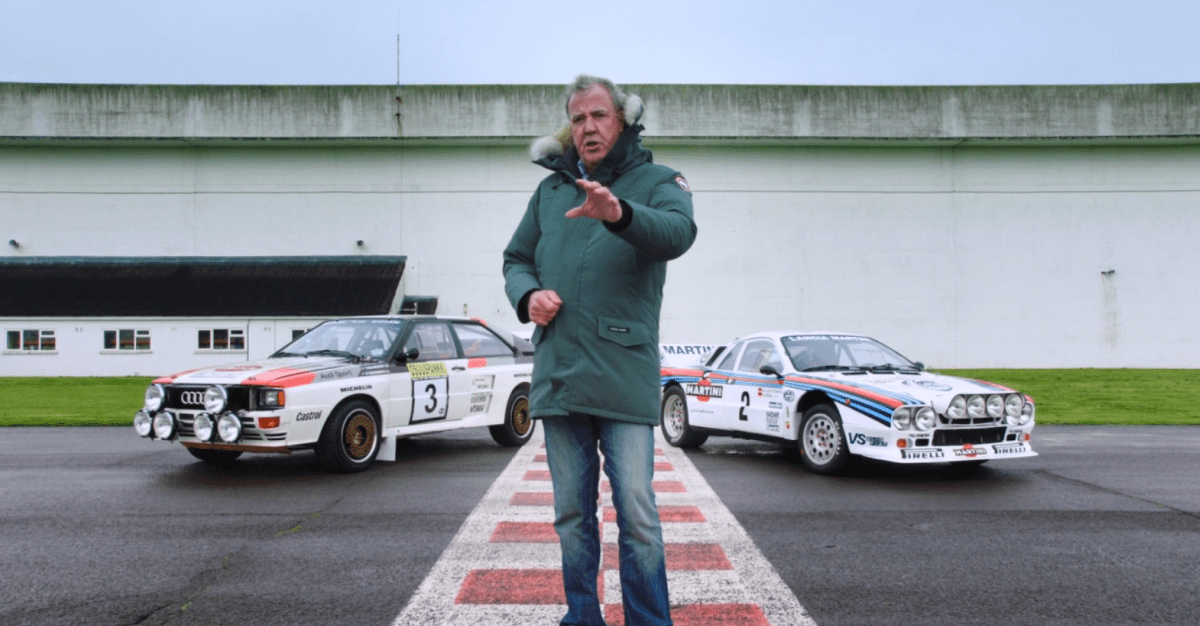 Reviewing the new Huracan Peformante, Richard Hammond notes that $50k more than the the already $200k Huracan doesn’t look worth it at first glance. You get active aero and 29 hp, but it?s not much faster than the original on paper, but the weight savings and active aero makes for a car that beat the Hypercar Porsche 918 around the Nurburgring.

To show the car against more direct competition, Hammond beats James May in a Ferrari 458 Speciale by a good margin in a drag race. Plus, unlike many track specials, the Peformante didn?t sacrifice the comfort of the standard Hurucan to improve on it.

The new Lambo was only slower around the Grand Tour test track than the Aston Martin Vulcan, which isn?t even road legal.

On Conversation Street, Jeremy Clarkson, Hammond and May discuss the glut of small companies making supercars without any heritage, or quality as far as they are concerned. They also lament the proliferation of electronic handbrakes that have ruined the hand brake turn that the hosts deem necessary for human reproduction. To cap off the segment, they offer jobs to a few American Navy pilots who got in trouble for skywriting some immature images in their jets. If that won’t fly in the Navy, they will fit right in on the Grand Tour.

With the reasoning that stopping for gas is the most annoying thing the average driver encounters, Hammond and May try to find a way around it. They claim the average driver spends 36 days of their life filling up, so they will attempt to invent an in-transit fueling system. Their first attempt is a truck rigged with pumps inspired by jets re-fueling in mid-air. After blowing up the first car, they re-think their approach.

They try to have people jumping car to car with backpacks of fuel to do it, but this time they blew up an attendant. The third time is the charm as they use an airport vehicle to drive a car onto a platform to fuel. This system actually worked pretty well. And Jeremy can’t believe a film ended with something other than miserable failure.

In an effort to see who is the fastest man that earns a living from punching and strangling other men, professional wrestling legend Bill Goldberg and Unified World Heavyweight Champion boxer Anthony Joshua are brought on as guests.

Goldberg has a huge collection consisting mostly of muscle cars, and has a lot more experience with speed than Joshua. On the track though, Goldberg’s driving had all the flamboyance of wrestling but could not keep up with the technical approach of the boxer. Joshua did it in 1:18.7 while Goldberg lapped in 1:20.4.

The feature film of the episode was one of the most informative we’ve ever seen from Clarkson. He examines the classic rivalry between Audi and Lancia in the 80’s World Rally Championship.

It is a fascinating history starting with Audi first putting AWD into cars in the late 70s. Once Audi got 4wd to be allowed in the WRC, they began to dominate. As other manufacturers scrambled to introduce their own 4wd systems, Lancia stayed true to its formula with a traditional RWD formula.

In 1983, the rivalry was at its peak, the well funded German Audi team vs the smaller Italian Lancia. It took every trick in the book, including skirting homologation rules and safety standards, stacking the deck at stages they knew they could win and even salting the roads in Monte Carlo to take away the Quattro’s advantage, but Lancia and its part-time driver won the constructor’s championship with a RWD car, the last two-wheel-drive vehicle to ever win.

The show was heading towards disappointment with some mildly entertaining but not very memorable segments before the the featured video history of Lancia vs Audi. The history of rally in the 80?s is absolutely amazing, and we will never tire of seeing the beauty of Lancia’s rally cars.

“I don’t like jumps. Because, you know, if i want to fly, I would be a pilot, not sitting in a car.” -Lancia Driver Walter Röhrl on why he refused to drive certain stages of the WRC