We've been told that "the future is electric vehicles," and given the prevalence of that particular phrase, many of us have made peace with it.

But, let's talk practicality: Where do you get an EV? Who makes electric cars? What if I'd rather have an electric SUV or an electric truck? After all, who even drives cars these days?

The answer is actually a lot simpler than you might expect. Nearly every automaker around the world is at least brewing an electric concept car. In fact, there are several automotive startups looking to start manufacturing electric vehicles in the very near future. And yes, SUVs, trucks, roadsters, and even convertibles are all within the realm of expectations.

"So where are they?" you might ask. After all, we've heard a lot about electric cars, but that doesn't necessarily mean we've seen them out and about on the roads. Electrified vehicles have different engineering requirements from gasoline-powered vehicles. Battery packs require development to not only work perfectly, but to provide customers with a level of range and power that makes them worth driving. Many automakers are tinkering with the process to reach perfection. Oh yeah, and then there was that global health crisis last year that more or less shut down the planet.

But, we're back on track for a brighter future with zero emissions now, and eco-curious drivers may be wondering where they can find that new electric car they've been interested in. Sure, you may be aware of Tesla, but here are 15 other electric car companies you'll want to keep your eye on. 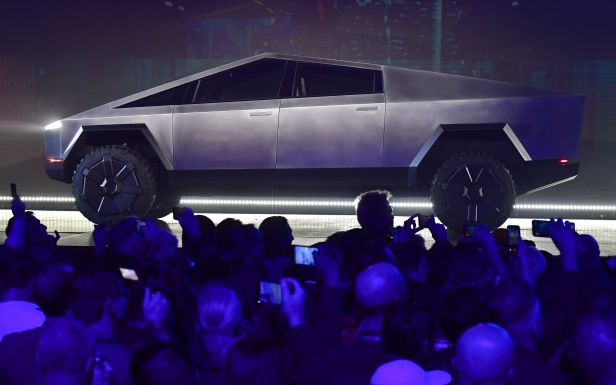 Wait, Tell Us More about Tesla...

Tesla has been around since 2008, producing exclusive high-end electric vehicles around the world. The draw of the Tesla is that the entire vehicle is technology-forward. You can yell commands at it, and it will perform tasks like farting and opening its butthole. Ok, so those are just a couple of Easter eggs, but voice commands and programmable everything are just a few of the draws of the brand.

Popular Tesla models include the Model 3, Model Y, Model X, and Model S. The Roadster and Cybertruck are slated for 2022 release. Despite it's surreal appearance, the Cybertruck is highly anticipated, particularly for its 500-mile range, 0-60 mile per hour acceleration speed of 2.9 seconds, and 14,000-pound towing capacity. And, if speed is your thing, the Roadster claims to be able to maintain speeds above 250 miles per hour.

It's been a slow climb, but this is definitely Tesla's time to shine. That being said, there are plenty of other options available or soon-to-arrive on the EV scene.

Many of the upcoming vehicles to the electric market are electric versions of vehicles we already know and love. Others have been around long enough that hearing their name might stir up some memories. 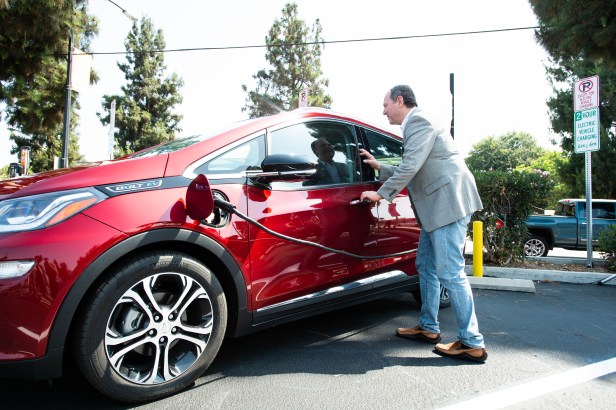 Chevrolet, for example, has been churning out EVs for awhile. The Bolt was first introduced in 2017, though comparing the 2021 Bolt EV and EUV to their 2017 efforts is a strong testimony to how far innovation has come in just a few years. In addition to these two vehicles, Chevy has also announced an upcoming electric Silverado with a proposed 400-mile range per full charge. It's not going to be exactly like the existing gas-powered version, thanks to its unique Ultium architecture, but it promises to be tough and work-ready. 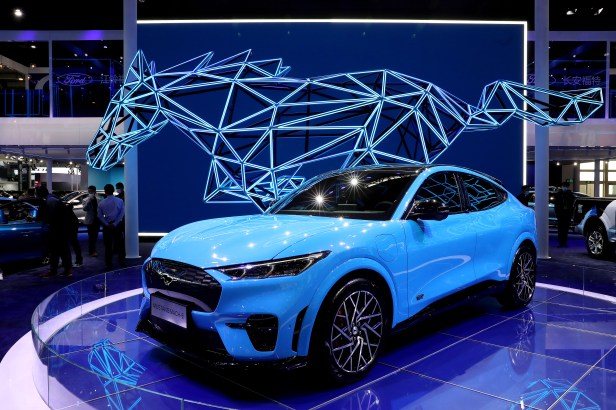 In the interest of keeping their lifelong competitive bond alive, Ford has matched Chevy's commitment to electric vehicles with their own options. The Ford Mustang Mach-E is a sporty SUV that takes its performance cues from the traditional Mustang, with the GT Performance Edition cruising from 0 to 60 miles per hour in just 3.5 seconds. And yet, it's a 5-passenger crossover with up to 59.7 cubic feet of cargo space when the seats are folded. Go figure.

Ford is also planning to release the F-150 Lightning, an electric follow-up to the best-selling F-150 pickup truck, in 2022, and an electric Explorer is in the works for future arrival, as well. 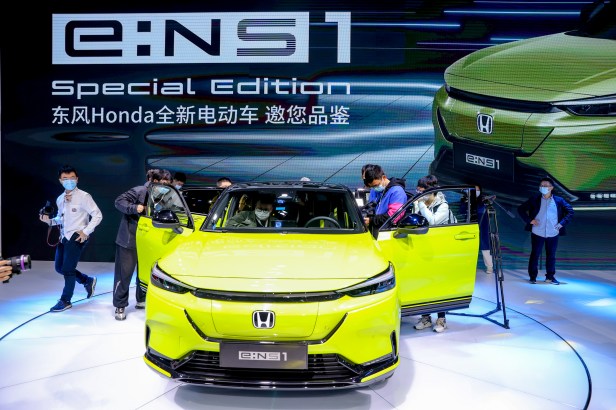 Honda previously offered the Clarity EV, but transitioned the model to a plug-in hybrid for 2021. The Accord, CR-V, and Insight round out Honda's hybrid family. However, the manufacturer has recently announced the all-electric Prologue, coming soon in 2024. Currently, we don't know a whole lot about the Prologue, other than it will be an SUV. 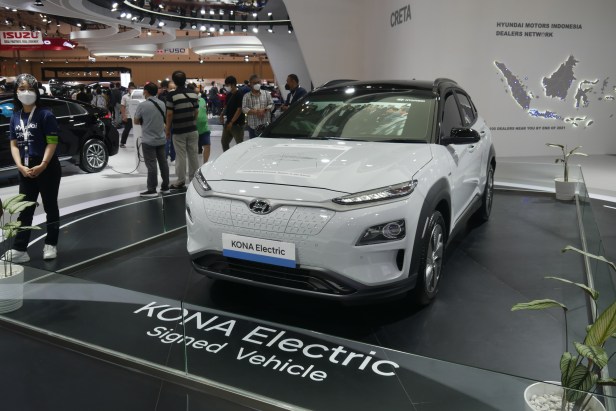 TANGERANG, INDONESIA - NOVEMBER 12: Hyundai Kona electric car signed by Indonesian President displayed during the GAIKINDO Indonesia International Auto Show (GIIAS) at Indonesia Convention Exhibition on the outskirt of Jakarta, Tangerang, Indonesia on November 12, 2021. This first auto exhibition during pandemic COVID-19 organized by the Association of Indonesian Automotive Industries GAIKINDO open for the public from 12 to 21 November and joined by more than 300 brands in the supporting industries and highlighted around 150 new vehicles. (Photo by Anton Raharjo/Anadolu Agency via Getty Images) 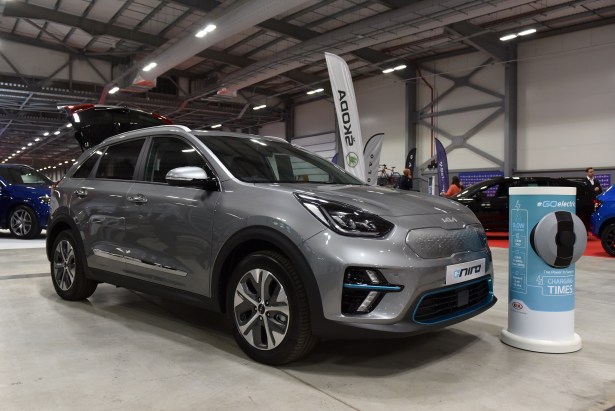 FARNBOROUGH, ENGLAND - AUGUST 19: A KIA E-Niro is displayed next to a charger unit at the British Motor Show at Farnborough International, Exhibition and Conference Centre on August 19, 2021 in Farnborough, England. The show returns in a new format celebrating all things motoring, past, present and future after being cancelled last year due to the Coronavirus Pandemic. (Photo by John Keeble/Getty Images)

Kia is another brand that has already committed to the electric way of life, with the Niro electric compact SUV, and the electrified Soul, which is not currently offered in the United States. The 2022 EV6 will be the automaker's first dedicated electric-only SUV, and it's already generating a significant buzz with its ultra-sleek styling and 300-mile range. 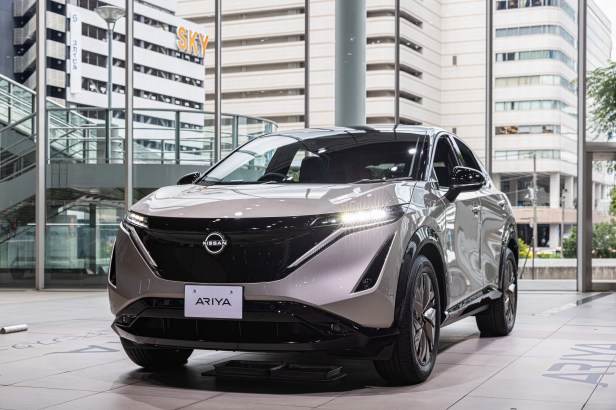 Considered one of the OGs of electric cars, Nissan continues to offer the Leaf. The first Leaf hit the market in 2010, and continues to be produced today, albeit with much more impressive performance and technology. Joining it next year will be the 2022 Ariya, an all wheel drive crossover SUV.

Read More: SEMA Show 2021 Taught Us 4 Things About the Future of Cars

Luxury cars are also getting the electric treatment, gaining the smooth, steady, and silent functionality of an electric motor (or three), while still subscribing to svelte styling and all the bells and whistles drivers have come to love. 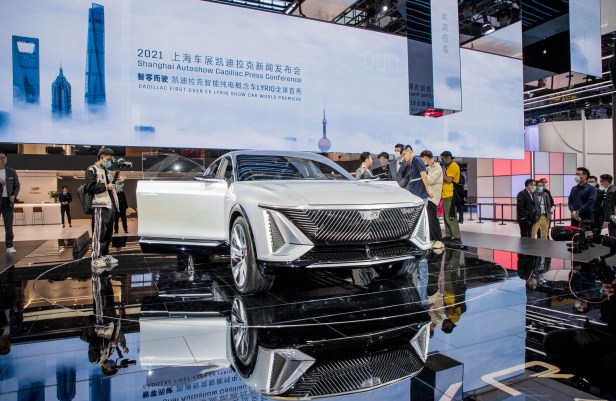 Cadillac, for example, will debut the Lyriq in 2023 and the Celestiq in 2025. The Cadillac Lyriq is an innovative SUV that hosts a bevy of the latest and greatest technological advancements, including SuperCruise autonomous driving, a transparent roof, and built-in Google. The Celestiq will be an all-wheel drive hatchback crossover that promises "immersive, personalized, and ultra-luxurious mobility experiences," according to Cadillac's press release regarding the vehicle. 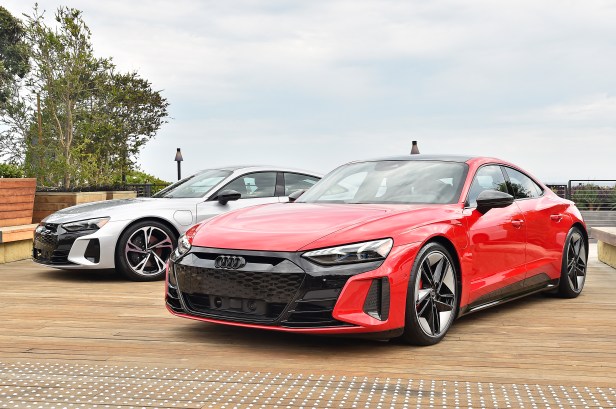 While Cadillac is making its entry into the EV world in the upcoming years, Audi would like to remind us all that it debuted the e-Tron line in 2019. The current e-Tron is offered in SUV and Sportback versions, and bears the distinction of being manufactured at a carbon-neutral facility. Up next will be a compact crossover SUV with a proposed range of around 220 miles and an enjoyable 355 horsepower. 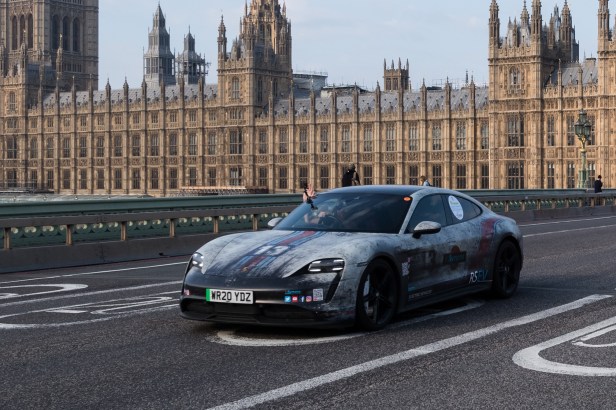 Porsche intends to continue the Taycan, a super-sexy, sporty electric car that actually offers a 0-60 mile per hour acceleration time of 2.6 seconds with its 750 horsepower overboost and launch control. Or, if you're looking for something appropriate for the entire family, the Maycan will be offered as an electric vehicle in the near future. 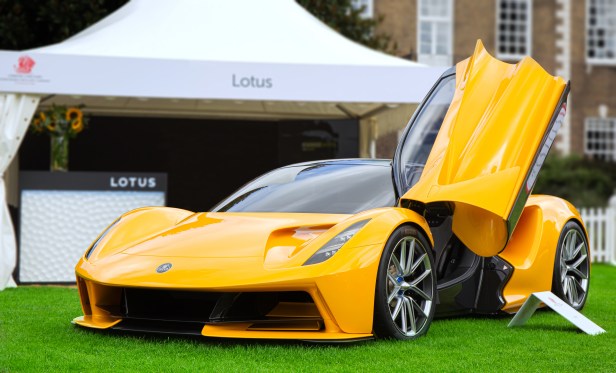 LONDON, UNITED KINDOM - AUGUST 19: The Lotus Evija seen at London Concours. Each year some of the rarest cars are displayed at the Honourable Artillery Company grounds in London. (Photo by Martyn Lucy/Getty Images)

If speed and the environment are equally important to you, then the Lotus Evija might be exactly what you're looking for. This 2,000-horsepower, all-electric hypercar has a top speed of over 200 miles per hour. From all accounts, it drives just like a gas-powered Lotus, for those who have had that privilege. 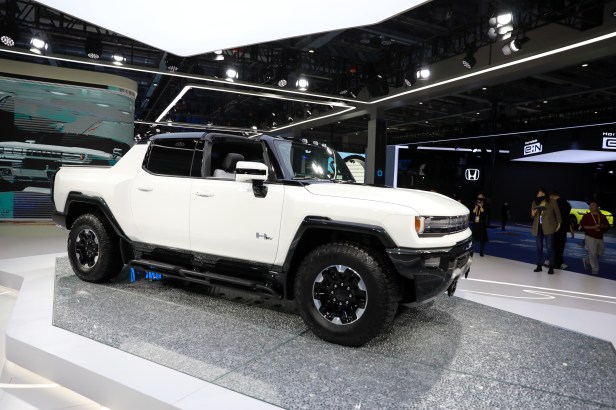 SHANGHAI, CHINA - NOVEMBER 05: A GMC Hummer EV truck is on display at the General Motors booth during the 4th China International Import Expo (CIIE) at the National Exhibition and Convention Center (Shanghai) on November 5, 2021 in Shanghai, China. (Photo by VCG/VCG via Getty Images)

For those looking for a completely different take on the "luxury" concept, consider the GMC Hummer. Newly electrified on an Ultium powertrain for 2022, the Hummer will be issued in pickup truck and SUV formats. Though it is very clearly constructed to be an off-road vehicle, the $108,700 starting price tag might be enough to remind us all that Hummer has never been a dull brand. Plus, the roof comes off, so it's technically a luxury convertible.

In addition to the big names and major player car makers we're used to, there are several up-and-coming manufacturers looking to get their vehicles into production in the near future. 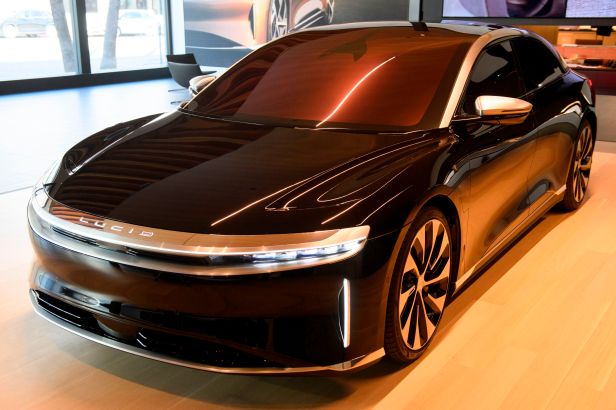 A Lucid Air Grand Touring electric luxury car is displayed at the Lucid Motors Inc. studio and service center on February 25, 2021 in Beverly Hills, California. - The California-based electric vehicle company announced this month that it plans to go public via a merger with a company that values it at $24 billion, with the pure-electric luxury sedan Lucid Air launching in 2021. (Photo by Patrick T. FALLON / AFP) (Photo by PATRICK T. FALLON/AFP via Getty Images)

The 2022 Lucid Air is looking very seriously at being a true competitor to Tesla. With its 520-mile range per charge, 20 mile-a-minute charging rate, and up to 1,111 horsepower (yes, four 1s), critics are pretty impressed with the previews. Given that Lucid made their name in developing a Formula E racing battery, electric vehicles seem to be exactly the right next step for the brand. 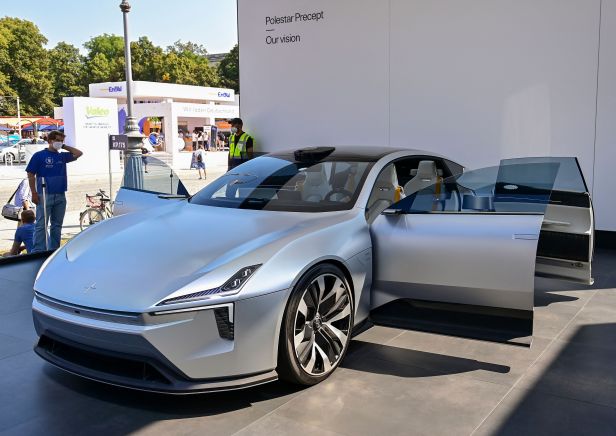 A Polestar vision car is pictured at the International Motor Show (IAA) in Munich, southern Germany, on September 10, 2021. - Germany's revamped IAA auto show, one of the world's largest, is celebrating all things car-related, but climate concerns and pandemic woes threaten to spoil the party. (Photo by Tobias Schwarz / AFP) (Photo by TOBIAS SCHWARZ/AFP via Getty Images)

Polestar is a subsidiary of Volvo. While Volvo currently offers its own all-electric vehicle, the XC40 Recharge SUV, Polestar developed from Volvo's racing partners, and exists as an all-electric eco-focused brand. The Polestar 2 is even available with a fully vegan interior.

Based in California, Canoo has plans to release a van and pickup truck in 2022. Given that Volkswagen has been teasing the electric bus/Vanagon concept-- currently known as the "Buzz" -- for the past five years, Canoo may just have the honor of debuting the first all-electric van in the US market. 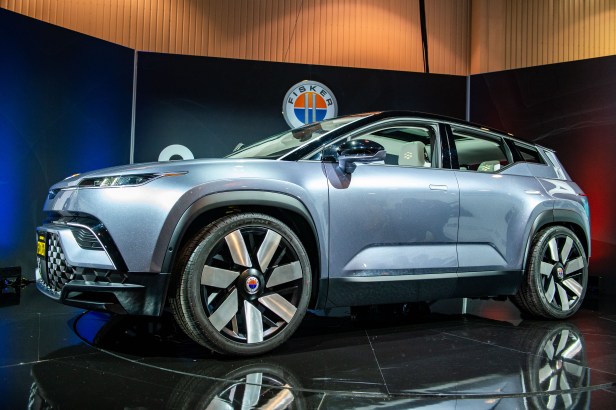 07 January 2020, US, Las Vegas: The Fisker Ocean electric car is on display at the CES technology fair in Las Vegas. A special feature of the car are solar cells in the roof, which are supposed to bring up to 1600 additional kilometres per year. Photo: Andrej Sokolow/dpa (Photo by Andrej Sokolow/picture alliance via Getty Images)

Fisker is another California-bred brand. Their particular focus is on sustainability. The Fisker Ocean, which they hope to release next year, will incorporate recycled materials in its construction, including the upholstery and vegan interior. Even the sunroof will be solar-powered. Designed by the same person who crafted 007's BMW Z8, Henrik Fisker, the Ocean maintains cool points even while it's doing good things for the planet.

And More to Come

Of course, this isn't an exclusive list of those who have made the Lithium transition, or are headed in that direction. With at-home charger technology becoming faster and more helpful, and charging stations springing up in public locations each day, it's very likely that we truly will see more and more electric vehicles in the future.

It will be interesting to see where the EV goes from here. Given our predilection for developing more, better, faster, and stronger automobiles, it only stands to reason that technology will be at the forefront of the EV movement. And, if history has taught us anything, that means that the future looks very, very cool.