In the automotive industry, trends come and go. Technology is improved upon before the general market even realizes what's happening.

Electric vehicles -- or EVs-- are one such trend. Automobile manufacturers have been dabbling in finding options for traditional gas-powered vehicles for many years, so the electric car is not really a new sensation.

However, while the electric motor was easy enough to figure out, engineers then had to consider how to make it practical. To keep an EV running, you need a battery pack, which might have a limited driving range, and then what? Get a new battery?

Today, there are more options for electric vehicles than ever before, and many feel this is a great sign for a low-emission future. But, are electric cars all they're cracked up to be? Let's take a look at some of the pros and cons of electric cars.

Pro: Electric Vehicles Could Save the World

You've probably seen this message a few million times, and you may be at the point where you're rolling your eyes over it. We get it. No one likes constant proselytizing. But here's the thing: there's a bunch of truth to it.

Vehicles with internal combustion engines run on gasoline and oil, which require crude oil to create. Crude oil is the stuff that's pumped out of the ground. It is a fossil fuel that is created via the decomposition process, and when fossil fuels are burned, they release a significant amount of carbon dioxide. Carbon dioxide, in turn, traps heat in the Earth's atmosphere, thus adjusting the dial on the planet's thermostat into the "way too darn hot" zone. And none of us have the money to pay this kind of heating bill.

An electric motor does not require gasoline. No gasoline means no tailpipe emissions. Zero emissions means significant reduction in the amount of carbon dioxide we're pumping into the atmosphere.

According to the EPA, the very folks who calculate our traditional gas-burning vehicles' fuel economy:

A typical passenger vehicle emits about 4.6 metric tons of carbon dioxide per year. This assumes the average gasoline vehicle on the road today has a fuel economy of about 22.0 miles per gallon and drives around 11,500 miles per year. Every gallon of gasoline burned creates about 8,887 grams of CO2.

The EPA encourages every person on this planet to consider what they can do to reduce their carbon footprint. According to the EPA, an individual's carbon footprint is measured as:

The total amount of greenhouse gases that are emitted into the atmosphere each year by a person, family, building, organization, or company. 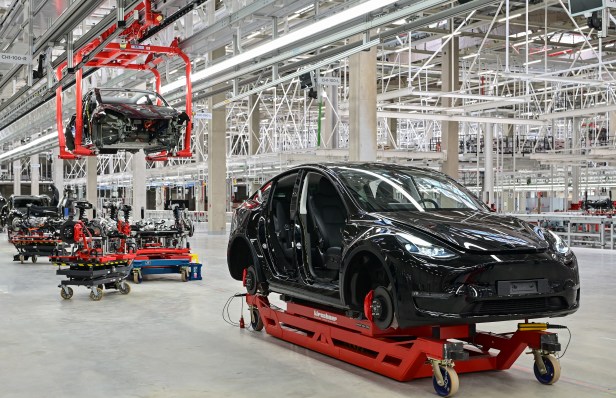 09 October 2021, Brandenburg, Grünheide: A Tesla Model Y under construction stands in a production hall of the Tesla Gigafactory during the open day. In Grünheide, east of Berlin, the first vehicles are to roll off the production line from the end of 2021. The US company plans to build around 500,000 Model Ys here every year. Photo: Patrick Pleul/dpa-Zentralbild/ZB (Photo by Patrick Pleul/picture alliance via Getty Images)

Read More: SEMA Show 2021 Taught Us 4 Things About the Future of Cars

The world has made some pretty significant breakthroughs, but we haven't figured out that perpetual motion thing yet. Give it another 20 years.

In the meantime, that means that electric cars need to have a power source. Early in the development of EVs, engineers realized they would need to create a battery pack that could provide the electric motor with the juice it needs to run.

Early battery packs were bulky and had a very limited driving range. Furthermore, they were so heavy that the vehicle wrapped around them had to be small. The result was a cramped car that couldn't go far.

Today's electric car batteries have much longer driving ranges, but one of the very real disadvantages of electric cars is that they do require frequent charging. And while drivers of gas-powered vehicles simply roll into the closest gas station, pump out $20 of regular, grab a soda, and head on out, even a fast charging electric car battery requires a little bit of time to charge. The Nissan Leaf, for example, can recharge at an average rate of 12.5 miles per minute, and the Tesla Model S is right up there with 13.3 miles per minute. You could probably fit an entire meal into the amount of time it would take to reach full charge, if you're really running low.

Counterpoint: EV Charging Is Now Easier Than Ever

It's true that public charging stations are springing up everywhere in response to the EV boom. You can find them in some truly surprising places, such as public car parks in larger towns and cities, in shopping mall parking lots, and even fast food restaurants.

It's easy to find a charging station, too. Many EV manufacturers are including apps that help locate nearby charging points, as well as multiple types of chargers so that drivers have more flexibility when it comes to options. Some even provide drivers with notifications when a charging point is nearby, or help drivers plan a route that includes convenient charging stops.

Level 1 charging is the first option. This requires a 120V power outlet, and while it is the slowest option for charging, providing only about three-to-five miles of range per hour of charge, it's awfully convenient to be able to plug your car into nearly any standard household outlet.

Level 2 is the most common charging method. You can have a converter added to your home to provide Level 2 charging at home; in fact, several car manufacturers have teamed up with professionals to allow drivers to have this service installed at their private residence. Many public charging stations are wired to provide Level 2 charging, as well. Depending on the vehicle and the charging station's wiring, you can get 12 to 80 miles of range pumped into your vehicle per hour, significantly reducing charging time.

Level 3 charging is also known as DC Fast Charge and Tesla Supercharging. This type of charging requires incredible power sources and some high-tech chargers, but can provide between three to 20 miles of range per minute of charge. Bear in mind that not all electric car models can handle this type of charge, so always read the instructions first. Other Ways of Saving Money and Enhancing Range with an EV

Just as some drivers are adamant about refueling their gas-powered car every time the fuel level drops below half a tank, range anxiety is a very real thing. It makes sense: how can you plan a cross-country road trip when you know that you'll need to stop and plug in your car every 300 miles, then wait a few hours before you can drive again?

One option is to not go "full electric," but select a plug-in hybrid, or PHEV. These vehicles offer all of the advantages of electric cars, but also feature a traditional gas powered engine to keep things going when the power supply is running low.

Another consideration is regenerative braking. Many EVs offer this technology; in fact, the Hyundai Kona features three different levels of regenerative braking. The term sounds a little mysterious, but it simply boils down to using the gas pedal and brakes a lot less, and using coasting time to allow the battery to recharge. Remember the days when we used to put the car in neutral when going downhill to save on fuel costs? Like that, only it actually works.

So, while charge times and having to pull over to charge is clearly one of the cons of electric vehicles, it's not as terrible as you might think. When you think about it, it's almost more convenient. Your gas-powered vehicle doesn't fill itself up at night, but your EV could.

One of the other things that's beaten into our brains regarding the benefits of EVs is the cost savings.

Clearly, gasoline prices are constantly fluctuating, and many of us grimace and gripe when we refuel our traditional gas vehicles. But, does plugging in your car to an electric outlet really save that much money in comparison?

Generally speaking, yes, but you have to look at the complete picture.

A traditional gas-burning vehicle requires gasoline. How much gasoline depends on how far you travel, and how many miles per gallon your vehicle can accomplish. SUVs tend to get fewer than 30 miles per gallon on the highways, while a compact sedan can cruise around at 40 miles per gallon and higher. Luxury models often require premium fuel, too, which can cost a pretty penny. As of October 2021, average fuel prices in the United States hovered around $3.50 per gallon.

Then there are oil changes. You have to pay for oil, filters, and even disposal of the sludge that comes out of your vehicle. If you use traditional oil, you can expect to pay up to $75 for an oil change, or raise that amount to $125 if your vehicle requires synthetic oil.

An electric car doesn't require gasoline or oil. It doesn't have oil filters. It has a motor, a battery pack, an on-board charger, and an Electric Power Control Unit (EPCU). If you're hip to regenerative braking, your brakes are going to last longer with an EV. It will still need maintenance, sure, but you likely won't be fiddling with it nearly as much as a gas-powered vehicle. Additionally, EV manufacturers are including warranties on batteries and charging equipment to help offset any unexpected upfront costs.

In most locations, using a 120V outlet for eight hours will have a lower price tag than filling a 12-gallon fuel tank. Of course, that depends on energy costs in your area, and your overall electricity usage.

However, there are ways to offset the cost of at-home charging. Solar panels are becoming more and more popular as a way to decrease home energy costs, and when paired with an EV, you're looking at a very small carbon footprint.

Some states are even offering tax credits and incentives for those who drive EVs and make efforts to reduce their impact on the planet at home. Many people are finding that reducing their carbon footprint can pay for itself!

Final Thoughts about the Pros and Cons of Electric Cars

In a nutshell, there are plenty of great things about electric cars. No emissions means a cleaner planet, and regardless of your feelings about climate change, we can all agree that breathing in tailpipe fumes is pretty unpleasant. You'll save money refueling, because you won't be doing that at all. Lower maintenance costs will also be a blessing, thanks to lower maintenance requirements.

One of the most commonly mentioned downsides to going electric is the charging process. It is not perfect, agreed, but EV manufacturers are working to make the process as simple and unobtrusive as possible. There are more ways to charge at home, more charging stations to choose from, and driving options such as regenerative braking to help stretch the range as far as possible. It's important to keep in mind that no car can refuel itself at this point, so arguing about whether it's easier to plug in a car at night or hit the gas station every so often really isn't a fair debate -- we all do it a little differently.

Therefore, it's impossible to say whether electric cars are "better" than traditional gas-powered cars. There are many things they do better, such as reducing emissions, but at the end of the day, only you can determine which option would fit best in your lifestyle. For those heading to a dealership to buy a new car, it's certainly not a bad idea to check out some of the electric offerings. Just be sure to read everything you can, and ask all the questions that come to mind...and then some.

And keep in mind, technology is always changing...