If you could drive just one fictional vehicle from your childhood, which one would it be?

You may want to take some time with this decision. After all, there are an awful lot of famous cars out there.

For drivers who lean towards speed and performance, the ultimate race car might just be the Speed Racer car. Known properly as the Mach 5, this open formula sports car has plenty of speed, and more than a few extra gadgets on hand to help Speed Racer out when he needs an extra hand racing through the Japanese anime series.

Take a look at what makes this entirely fictional car such a coveted ride. 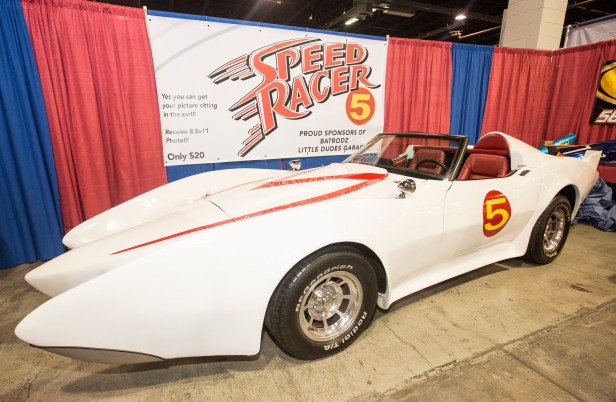 Speed Racer's car was custom made for him by his father, Pops Racer. Debuting in 1967, the Mach 5 of the original series -- known in Japan as "Mach Gogogo!" -- features the styling of high-end European Formula 1 race cars, and an even more impressive array of technology features, each activated by a button on the steering wheel.

Button A, for example, activates the auto jacks. Pops Racer was probably thinking that his young son would run the car hot and need lots of repairs (he's not wrong), so he created a button that would activate four jacks to lift the car. Speed Racer, however, uses those jacks as a way to make the car jump, and even as an emergency braking system. Since this is television, there are no repercussions to the chassis for doing this.

One fabulous feature of the Speed Racer Mach Five is that Pops actually alphabetized the buttons to the functions. Button B is for Belt Tires, which is kind of an early concept all-wheel drive on demand with adjustable torque. Not only do the tires that whiz out with a push of this button grip everything, but they each get an equal distribution of 5,000 horsepower. Do with that what you will, on or off the race track.

Button C is a handy set of saw blades, great for cutting down trees. D is for the Deflector shield, which basically makes the driver impervious to everything around him. Button E is for the Illuminating Eye, which is essentially automatic high beams with infrared helmet cam. In later episodes, E would also activate wings, which is something we haven't figured out how to incorporate in modern car development. Yet.

Frogger Mode is activated by Button F, which releases the 100 pounds of oxygen stored...somewhere? and raises the periscope so that the Mach V can be driven under water. Which sparks the debate: Would you rather have a flying car, or a submarine car?

Moving on, the final button on the steering wheel activates the homing robot, which can fly, send messages, and even fight off the bad guys. It's like OnStar and Tesla Voice Command manifested a little baby robot who can run errands and lay the smack down equally. The homing command for the robot is button H, which is not on the steering wheel, but on the console.

Unlike many race cars, the Mach Five has a trunk, which is mostly used as a plot device as a place for Spritle and Chim-Chim to hide. 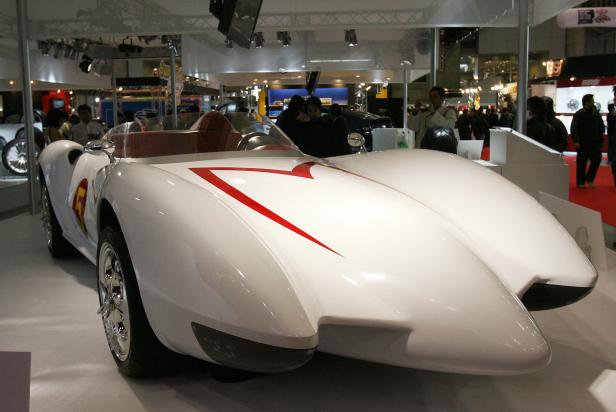 A model car of the Japanese animation, "Speed Racer" is displayed at the Yokohama Tires booth during the annual Tokyo AutoSalon 2008 exhibition in Makuhari, 11 January 2008. Around 540 are on display at the three-day long exhibition. AFP PHOTO / TOSHIFUMI KITAMURA (Photo credit should read TOSHIFUMI KITAMURA/AFP via Getty Images)

Read More: The '76 AMC Pacer From "Wayne's World" Has Been on a Wild Ride Over the Years

What Kind of Car Is the Mach 5?

The Mach 5 is its own bespoke car, created entirely by Pops Racer. But, if you look a little closer, you can see some real-life influences in its design.

Obviously, a Formula 1-type racer is going to have a nod to Le Mans winners, so there's a touch of the Ferrari 250 Testa Rossa in there, especially around the nose cone, though some say it draws more from the Ferrari 250 P5.

The Aston Martin DBR1 has a bit of the cartoonish looking front end, which makes it a contender for the well-equipped, well-mannered race car. Of course, the same could be said about the 1959 Corvette Stingray Racer concept or the Ford GT40.

More likely, the Mach 5 pulls from the 1965 Prince R380, winner of the 1966 Japanese Grand Prix, though that particular car has a hard top, while Speed Racer's cabin is only enclosed when the right button is pushed.

All of these cars were doing incredible things on the Grand Prix and Le Mans tracks at the time Speed Racer came out, which hyped up the show even more. Pops Racer managed to make an early supercar even more super. 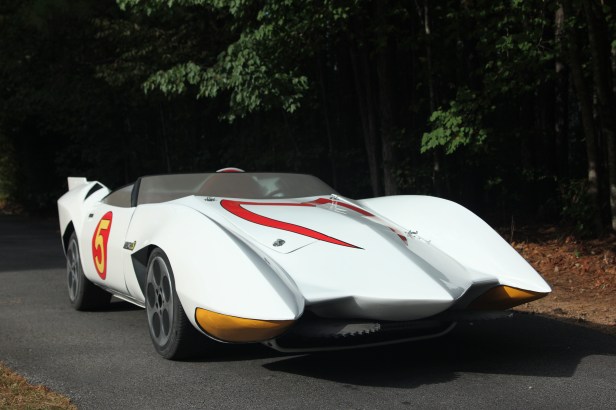 *** EXCLUSIVE - VIDEO AVAILABLE ***
GEORGIA, UNITED STATES - OCTOBER 14 2016: Now the build has been e=perfected the AKA Junk team are able to create Mach 5's for any Speedracer superfan in Georgia, United States, October 14 2016.
An expert car customiser has transformed a 94 Corvette into a stunning replica of the Mach 5 from the iconic 1960s cartoon Speed Racer. Jerry Patrick, who owns car replica extraordinaire AKA Junk, has been transforming cars into classic cartoon and movie vehicles for over a decade. After falling in love with the Mach 5 in the 60s, 51-year-old Patrick had to fulfil his lifelong dream of driving the real deal.
PHOTOGRAPH BY John-Paul Steele / Barcroft Images
London-T:+44 207 033 1031 E:[email protected] -
New York-T:+1 212 796 2458 E:[email protected] -
New Delhi-T:+91 11 4053 2429 E:[email protected] http://www.barcroftmedia.com (Photo credit should read John-Paul Steele/Barcroft Media via Getty Images / Barcroft Media via Getty Images)

Has Anyone Made a Real Speed Racer Mach 5?

In the year 2000, a prototype Mach 5 was created on a Corvette chassis. There were rumors that a street-legal version was going to be released in 2002, including Button C and a 345-horsepower mid engine. It's not really known whether it was the practical ramifications of drivers having saw blades attached to their vehicles, or other production issues, but one of those prototypes is on display at the Petersen Automotive Museum.

Then, in 2008, the Wachowski siblings resurrected Speed Racer into a live action movie.

In this version, the Mach 5 gets two siblings: the Mach 4 and the Mach 6. The Mach 5 technically belongs to Speed's brother Rex, who leaves it behind. Mach 6, therefore, is Speed's main whip, until it gets destroyed in a race...maybe you should just watch the movie for these plot tips.

In the movie, the Mach vehicles are pretty, street-legal cars that are retrofitted with gadgets that make them invaluable as racing cars. They're equally comfortable in high-speed pursuit in off-road races, like the Casa Christo 500, and tooling around town.

On the other side of the camera, the Mach 5 was actually suspended from a crane, and most of the stunts and effects came from computer technology.

If you'd like to have your own Mach 5 to keep at home, you're in luck. One of the hottest merch items from the film's release is a Hot Wheels 1:18 scale diecast model, created by Mattel to commemorate the return of Speed Racer. It definitely won't go as fast as a full -scale Mach 5, but the collectible is definitely less expensive than the real thing.

Sure, there are plenty of cartoon, anime, and manga race cars that would be fun to drive, but for the sheer excitement and blend of Le Mans sophistication with off-road hijinks, the Mach 5 driven by Speed Racer definitely has our vote as one we'd like to get out in the open.