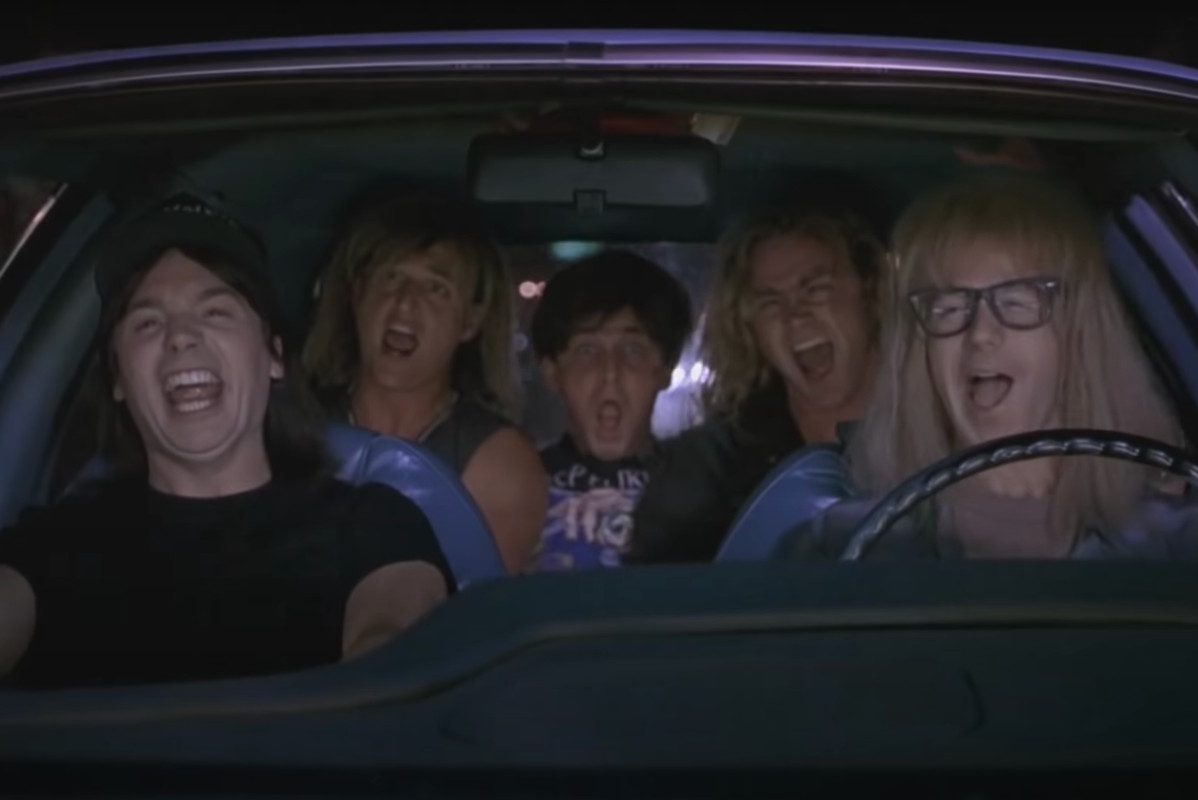 As most people should know by now, the movie Wayne’s World is an iconic film that still holds up today. It started as just a Saturday Night Live skit, but it was too funny to leave at just that, so it developed into an actual movie. With Mike Myers as Wayne Campbell and Dana Carvey as Garth Algar, the cult classic comedy surrounds the shenanigans at a rock music-centered public access show.

In the clip below, you’ll see exactly why people got hooked on this movie from the very beginning. This hilarious opening scene features Wayne and Garth cruising around Aurora, Illinois in a compact car nicknamed The Mirthmobile, blaring Queen’s Bohemian Rhapsody through the stereo system. Everyone loves a good lip syncing session with friends during a late-night drive, which makes this one of the most iconic movie driving scenes. You gotta love it!

Partying on With the Wayne’s World Car

Now, while a handful of people could tell you what kind of car they were driving in Wayne’s World, most watchers nowadays probably have no idea. Below, we’ll check out some information about Garth’s ride, and find out where it ended up throughout the years after the film’s release.

So, the car used in the film was actually a 1976 AMC Pacer. It sports mismatched wheels and a light baby blue paint job with flame decals on each side. Another great custom feature of this car was the licorice dispenser located on the headliner. The AMC Pacer used a 3.8L inline six engine, and it was paired with an automatic transmission. This car perfectly matched the dynamic personalities of Wayne and Garth.

The car certainly made its way around after the movie. The Volo Auto Museum was in possession of it for quite some time, before they offered it for sale in 2004. Around this time, they wanted $15,000 for it. We didn’t see too much of the car until 2015, when it suddenly appeared on an episode of Pawn Stars in Las Vegas. The owner explained that he got the car from Volo, and even though it was not in running condition, Rick Harrison ended up purchasing the car for $9,500.

While many movies use multiple cars for filming, Wayne’s World didn’t do that. This 1976 Pacer was the only one used in the film, making it even cooler. Since Rick’s ownership, lots of restoration work has been done, but it appeared once more when it showed up at Barrett-Jackson auction in 2019. The Pacer ran through the auction with “schwing” license plates, and it ended up selling for $7,150 to one lucky bidder.

It’s in the hands of another fan now, and, hopefully, the iconic AMC Pacer from Wayne’s World stays in the great shape that it’s currently in. It may not be the most expensive movie car ever sold, but it’s a piece of movie history from one of the greatest comedies ever released.