You know your car collection is cool when the Petersen Automotive Museum has some of your clutch pieces on display. "Reclaimed Rust: The James Hetfield Collection" features 10 custom hot rods from the Metallica frontman's personal collection.

The exhibit at the Petersen was supposed to run through 2020 before heading on a world tour, but then COVID-19 happened, which turned most certainties into a shiny bouquet of question marks. Therefore, if you can't get to the museum in Los Angeles, California before it closes, you can always purchase the accompanying book, Reclaimed Rust: The Four-Wheeled Creations of James Hetfield.

Rock stars and classic cars go together like a piston and rod, but Hetfield's collection goes beyond the odd custom coupe or roadster.

His first exposure to custom cars was through his father, who built and restored them in the family garage. Then, there was his brother's Plymouth Barracuda, which he famously wrecked and put back together with Bondo. But, things really took off in the parking lot of the original McDonald's in Downey, California, which had an incredible hot rod scene during Hetfield's childhood.

Hetfield's first personal build was a 1953 Buick Special. He joined the Beatniks Car Club, which he considers his first real entry into custom car culture. One of the cars in the Petersen collection -- a 1963 Lincoln Continental by the name of "Dead Kennedy" -- reflects Hetfield's changing style over time.

Every hot rod in James Hetfield's collection is a custom car in the full sense of the term. It doesn't just have a custom paint job or interior, but the whole bespoke car came out of Hetfield's mind, with design and building input from experts, most notably, Rick Dore, including the Black Pearl, Aquarius, and Skyscraper. Scott Mugford of Blue Collar Customs was also involved in vehicles like the Iron Fist and Str8Edge.

Here are a few highlights from the collection, though admittedly, it's really hard to do these amazing beauties justice in print. As you can imagine, James Hetfield's car collection is just as eclectic, exotic, and mind-blowing as the heavy metal guitarist and vocalist himself. 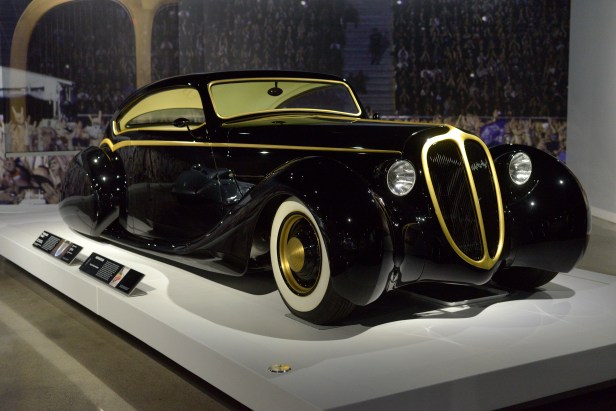 The inspiration for The Black Pearl was a 1948 Jaguar, but only the outer frame rails are original to the model. The engine is a Ford V8, and the rest of it is custom built.

The Black Pearl has a certain liquid sexiness to it that can be found in many of Hetfield's collection. The suicide-style doors blend seamlessly into the sweeping Art Deco styling, resulting in a teardrop shape that every 1930s European touring vehicle aspired to have. 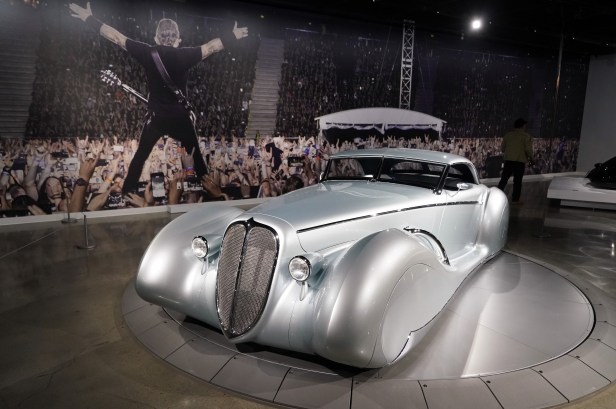 Aquarius is a jaw-dropping sight to behold. In fact, James Hetfield recommended the Petersen display this particular vehicle on a turntable to allow the crowd to appreciate its beauty from every angle.

Once you get past the angelic glow of its silver exterior, there's the matter of its sultry shape. The styling inspiration was the 1939 Delahaye Type 165, though the rear fins, peaked windshield, and removable hard top hearken back to the American hot rods of the 1950s.

Designed to be a "floating car" with the wheels hidden from view, Aquarius seems to glide over the roads, though Hetfield admitted in an interview that sometimes getting over the odd speed bump was a little nerve-wracking. 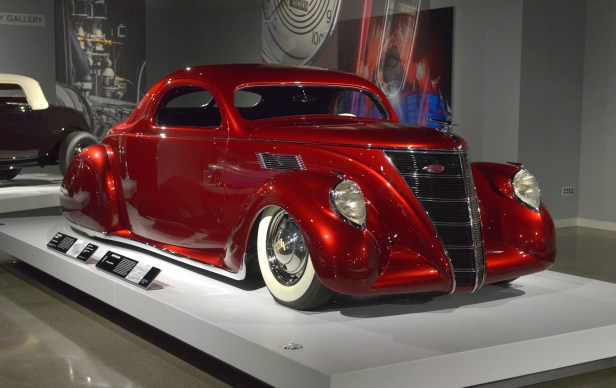 There's no missing the smoldering red visage of Voodoo Priest. At one point in its life, Voodoo Priest was a 1937 Lincoln Zephyr. It's owner served in Vietnam, came home, left the car in his mother's driveway, and disappeared.

If the red paint and strange backstory don't capture your attention, then how about the 4.4L V12 engine that powers the strange beast? Three Stromberg 97 carburetors and some upgrades later, and this flame-shaped vehicle blazes down the road.

The styling of Voodoo Priest is so remarkable, it won the 2012 H.A. Bagdasarian Award for the "World's Most Beautiful Custom." 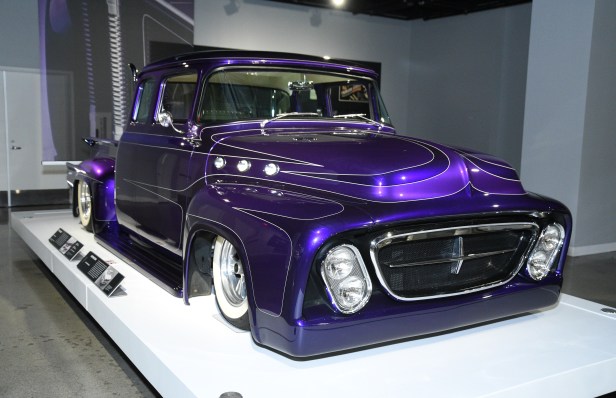 A result of James Hetfield's several collaborations with Scott Mugford, Str8 Edge is unusual for a few reasons. First of all, it's a bright royal purple with a pristine white interior. Next, it's a pickup truck. And beyond what you can see in the final product, it was already partially restored when Hetfield got his hands on it.

At one point, it was a 1956 Ford F-150. Since then, it's been customized to look like the future we dreamed of in the 1960s. It's got slick winged taillights, and a hot-rod style vented hood. It rides low, barely skimming the ground, and giving the crowd a lot to look at and a lot to like.

Legend has it that Str8Edge was one of the most difficult custom builds, based on a truck that had been chopped up to carry around its previous owner's golf cart. Today, however, it's receiving just the right level of admiration for a beast of its beauty.

Reclaimed Rust includes 10 of James Hetfield's personal hot rods. From the lilac-colored Buick Skylark known today as the Skyscraper roadster to the bronze-tinted Slow Burn with its outrigger rear wheels, the collection is equal parts art and mechanical mastery. It's rare to find custom car collections that have come directly from the brains of their creators to this level.

While you might catch a glimpse of something that might have once been a Packard or a Jaguar, the exterior has been re-imagined through the mind of James Hetfield of the heavy metal band Metallica. The result is an aesthetic dreamscape that defies the base description of "custom car collection."