Both versions of Gone in 60 Seconds have one thing in common: Eleanor. The muscle car Eleanor is one of the most memorable movie cars in film history. The original film was written and directed by H.B. Halicki. Halicki also starred in the film as its protagonist Maindrian Pace. The movie focused on a group of car thieves and their quest to steal a large number of cars in record time.

In the film, Maindrian runs a chop shop in California by day and a car theft ring by night. He is enlisted by a drug lord to steal 48 cars within a small window of time. If he completes the mission he will receive $400,00. The overconfident Pace agrees to the drug lord's strict terms and begins to plan the operation with his team. They give each vehicle they intend to steal code names when developing a strategy to steal all of the cars. The list included cars from Porsche, Ferrari, Mercedes-Benz, Lexus, and more. But, the best of the cars on the list is a 1973 yellow Ford Mustang, code name Eleanor.

The original Eleanor was a 1971 Ford Mustang made to look like a '73 Mach 1 using a little Hollywood movie magic. The stunt version of the Mustang took over 10 days to prepare. The vehicle featured a roll cage, shoulder harness, deadbolts for the doors, an on-board first-aid kit, and many other safety features. Multiple versions of the vehicle were built for stunts and close-ups. Henry did his own stunts for the film and boy, were there stunts. One of the most dangerous being a 128-foot jump.

The original Ford Mustang from Gone in 60 Seconds still exists today, despite multiple accidents during filming. Halicki suffered a concussion and various other injuries while performing the many stunts that made the movie so great. The most famous scenes from the film were all part of the legendary 40-minute car chase. This would become the longest car chase in film history, during which 93 replicas were destroyed. For context, the chase scene from the classic film Bullitt -- arguably one of the most iconic of all time chase scenes of all time -- was 10 minutes and 53 seconds. 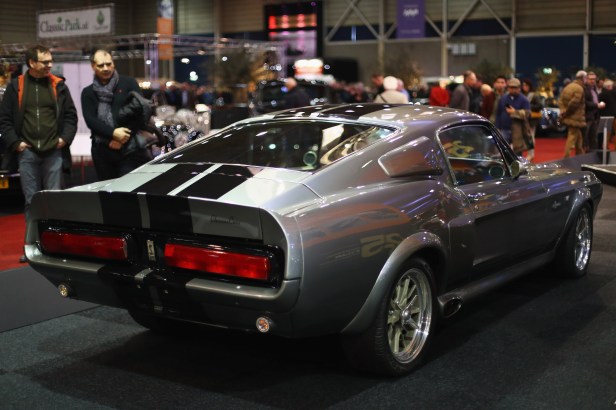 MAASTRICHT, NETHERLANDS - JANUARY 12: A detailed view of the 1967 Ford Shelby Mustang GT500 know as Eleanor from the movie or Hero Car in, Gone in 60 Seconds during the 25th edition of InterClassics Maastricht held at MECC Halls on January 12, 2018 in Maastricht, Netherlands. Exhibitors and participants will be showing classic cars, engines, restoration equipment and supplies, new and used accessories, interiors, maintenance materials, literature, models, objects of art with the theme "classic race cars" plus club stands and museum representation. (Photo by Dean Mouhtaropoulos/Getty Images)

Eleanor From the Gone in 60 Seconds Remake

The 5.8-liter V8 commanded a mind-blowing 400 horsepower. It may not have been the original, but the 2000 remake features a Mustang fastback hero car for the books. In the movie, the car even had nitrous. Mecum Auctions held an auction for the muscle car, pricing it as over half a million dollars in Kissimmee, Florida. Many of the other vehicles featured in the film were made by Cinema Vehicle Services.

Gone in 60 Seconds is a classic car movie. The remake did the original justice, thanks to an iconic car of its own. If you like stunts, crazy jumps, and expert driving, either version of the film should suffice, but I suggest you watch both. Either way, after any version of this film you'll want an Eleanor of your own.