There are two types of people out there: those who love to keep things original, and those that prefer to modify. The 1965 Volkswagen Beetle has owners that fall on to both sides of this spectrum, but no matter where you find your own personal taste, it's hard not to fall in love with this ride.

Gas Monkey Garage are at the top of the modification game, having done everything from restoring a '67 Ford Mustang to presenting Burt Reynolds himself with a Smokey and the Bandit Firebird Trans Am. So, when the team was presented with its own '65 VW Beetle on an episode of Fast N' Loud, they couldn't help but transform it into a better version of itself. Check it out!

That transformation included tearing out the old engine and replacing it with one that produced 210 horsepower with some performance carburetors. That's more than quintupling the power that it came with from the factory, and with a weight under 2,000 pounds, it's much faster on the road than you might expect. It was upgraded with a set of wide Airkewld smoothie wheels and some Nitto NT01 rubber tucked into the fender, but even that can't stop this thing from spinning the tires when you're getting on the throttle. It's a good thing they upgraded to disc brakes all around.

They kept the original beige exterior color and paint matched the wheels to match. To complete the look, it's got the perfect amount of chrome trim to compliment the color. They even added chrome wipers. As for the inside, it was cleaned up with an all-new interior, with a clean-looking steering wheel, shifter, sun visors, and seats to bring it all together. As they take it on a test drive for the first time, they're quick to brag about just how fun this car really is.

Now, as you probably know, the VW Beetle has been extremely popular over the years. Some folks like them straight from the factory, while others like them chock-full of aftermarket parts, from minor carb upgrades to complete V8 engine swaps and off-road suspensions. Let's take a look at what the draw was to the 1965 Beetle when it was released from the factory. 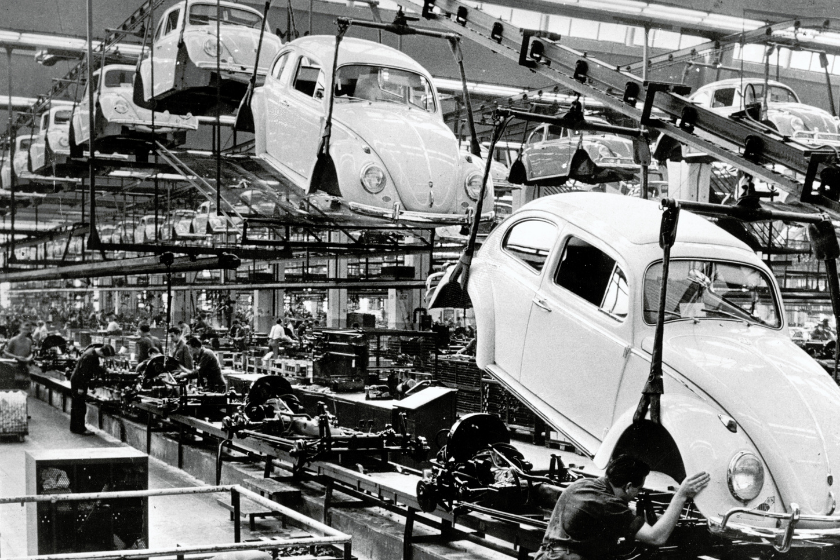 Volkswagen produced over a million VW Bugs in 1965, and with pricing under $1,400, it's easy to see why they were so successful with sales. First-time car buyers were quickly attracted to the deal. This coupe featured a 40-horsepower air-cooled engine located in the rear with a cool bubble hatchback body style. The drivetrain also included a rear-wheel drive layout with a 4-speed manual transmission, and with its small size, it proved to be a pretty fun and practical car to cruise around in.

The 1965 Volkswagen Bug model did see a few noticeable changes from previous years. Practically all of the body stamping was redesigned, and that opened up more room for larger glass. The flat windshield was replaced for one with a curve, and the size increased by 11 percent. The door glass increased size by six percent, and the rear window was 19.5 percent larger. Overall, it opened up the style a bit more, and gave it a much more modern look.

The Volkswagen Beetle convertible was also an option in '65, along with the more traditional hard top. There was even a sunroof option, if you wanted to split the difference. Over the years, these vehicles have become highly sought-after classic cars, and the garaged ones are the rarest to come across.

Every now and then, you might see a new listing of a clean Bug, but most have been victimized by the elements, with rotted-out frames, floor pans, and body panels. As long as you don't mind wrenching on your car a bit to get it back in shape, they're a pretty cool project to have around the house. If you are afraid of some work or you can't be bothered with the hassle of bringing it to a shop, maybe a brand new Volkswagen Beetle for sale at your local dealership would be more your speed.

READ MORE: Herbie the Love Bug: Remembering the Classic Race Car With a Mind of Its Own