Why would someone buy a multi-million dollar supercar? It's not very practical, you have to be extremely careful while driving it around the city, and it's usually terrible on fuel. Trying to just take a casual cruise on a public road with an extremely costly ride can cause all kinds of anxiety because of distracted drivers, pot holes, and rock chips.

Well, let's be honest, exotic cars like these are a very niche market. Yes, they are extremely fast, and some people use them for speed, but one of the main reasons people buy vehicles like this is to use them as a status symbol. It makes a statement when you show up in a top-of-the-line exotic car. There's a lot to choose from, but there's one in particular that would get you noticed during any occasion: The extremely rare Apollo Intensa Emozione. It'll cost you close to $3 million to get your hands on one.

You read that right. This hypercar costs around the same price as a Bugatti Chiron. Price aside, this car is actually extremely impressive, and it's taken a lot of time and brilliant engineering to bring this idea to life. Below, we'll look at a little more detail on the car's history, and what you get with the extremely large price tag. 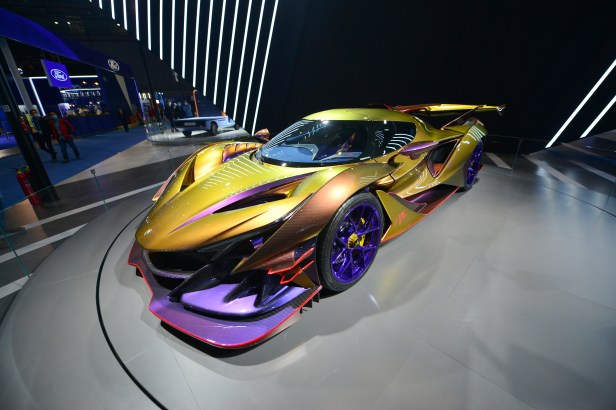 SHANGHAI, CHINA - NOVEMBER 05: An Apollo Intensa Emozione (IE) sports car is on display during the 3rd China International Import Expo (CIIE) at the National Exhibition and Convention Center on November 5, 2020 in Shanghai, China. (Photo by Shen Chunchen/VCG via Getty Images)

Intensa Emozione translates to "intense emotion," and the name very much suits this wild creation. There will only be 10 total units produced and sold, all of which have reportedly been claimed.

It all started out when Norman Choi, current CEO of Apollo Automobil, saw that Roland Gumpert's failing car company went up for sale. Without much hesitation, Choi saw the potential and bought the company. They began making changes to the Gumpert Apollo N, when the CEO hoped "to establish something that we will never forget." Originally, they released the concept of the Apollo Arrow in 2016, but we did not see a release of an actual car until about a year and a half later with the Apollo IE hypercar.

The IE is wildly different from the original Arrow concept car, and that's because they ran into a couple snags with the chassis on the way. After working with the Apollo N for some time, Choi eventually decided that the tubular chromoly frame designed by Gumpert would not be good enough for what he had in mind. On top of the frame change, they even decided to ditch the twin-turbo V8 for a naturally aspirated V12 engine.

They started working on the engineering for the new Apollo and ended up with an all-carbon fiber chassis with a carbon monocoque. Even the subframes on both ends are carbon. It even incorporates tons of crash protection into its extremely sleek exterior design. After getting the chassis squared away, Apollo teamed up with HWA AG in 2018 for their final development of the car. Here's what you can expect from the finished product. 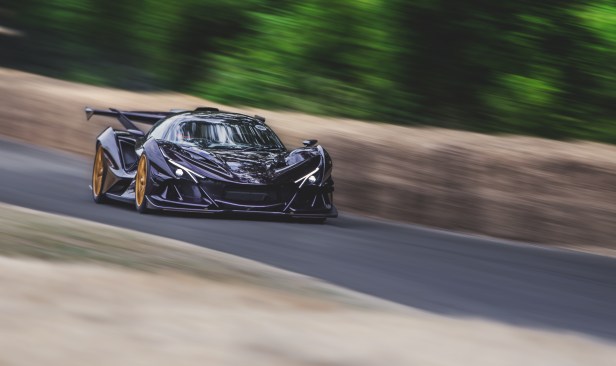 CHICHESTER, UNITED KINDOM - JULY 12: The Apollo IE at Goodwood Festival of Speed 2018. IE, which stands for Intensa Emozione, translates to 'intense emotion'. This is Apollo's first produced model. Only ten units will be built, each with a 6.3-liter V12, producing 770 horsepower. The Intensa Emozione will be sold for $2,670,000 in the United States. All ten cars have been reportedly sold. (Photo by Martyn Lucy/Getty Images)

The Apollo Intensa Emozione has a 106-inch wheelbase and an overall length of 16.5 feet. The ride height is hydraulically adjustable. The IE comes with Bilstein adjustable dampers and a double wishbone setup with full push-rod and rocker arm design, as well as adjustable anti-roll bars. The curb weight of the car is right at 2,755 pounds.

The car uses a Ferrari-derived 6.3-liter V12 engine. Developed by both Autotecnica motori and HWA AG, it produces a whopping 780 horsepower at 8,500 rpm and redlines at 9,000 rpm. Behind it is a Hewland six-speed gearbox with paddle shifters. Since that's a ton of power going to the ground, the car is also equipped with three driving modes and a 12-level traction control system. It's capable of doing 0-60 in just 2.7 seconds and has a projected top speed of 208 MPH.

With all that power, it's good to have some solid brakes under you. The IE is outfitted with carbon ceramic Brembo brakes with a massive 6-piston caliper in the front and a 4-piston in the rear. Here's another cool fact that might help when you take this race car to the track: The IE comes with a pneumatic quick-lift system utilizing four air-jacks under the vehicle.

One of the biggest appeals to this car is without a doubt the exterior styling. Made almost entirely from carbon fiber, the design is sharp and unique. It's also extremely aerodynamic and capable of producing tons of downforce. The design itself was actually based on airflow, nature, insects, and marine animals specifically. It looks fantastic, because the main goal of the car was to create something that would stand out from all the others. If you ask me, I'd say they did exactly that.