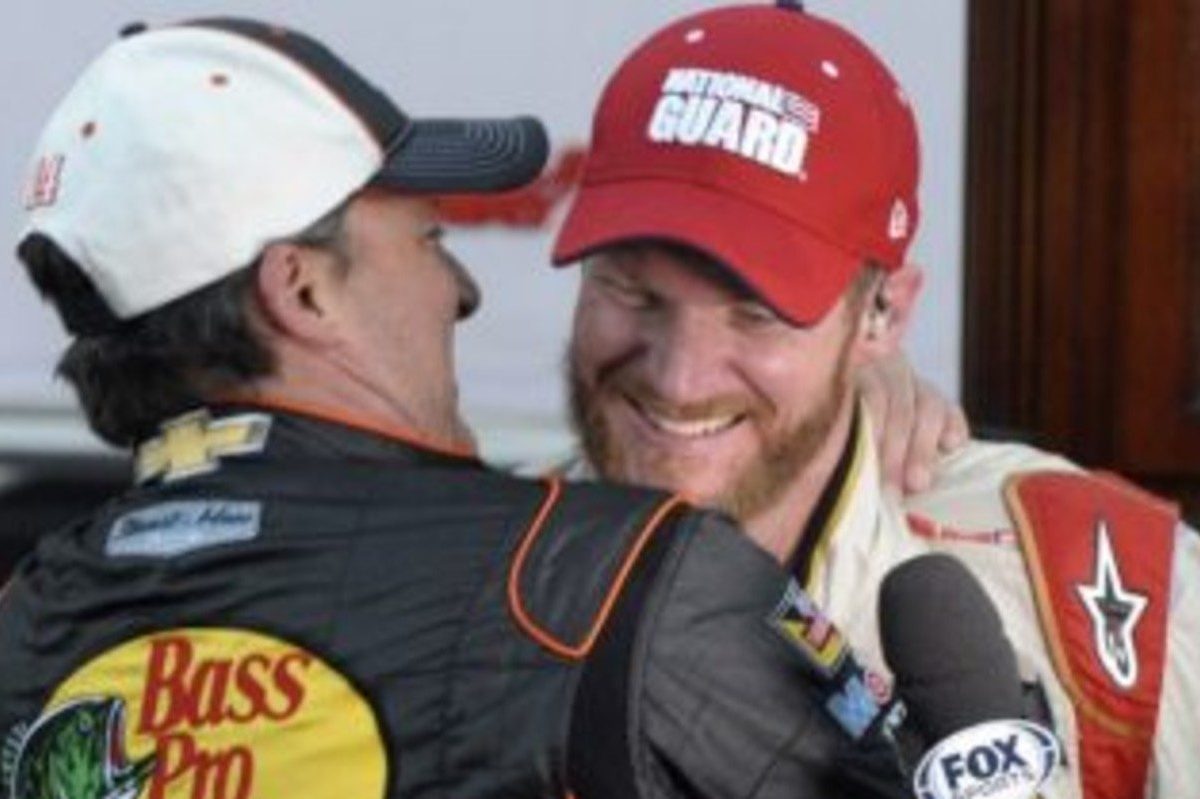 While a number of intense rivalries have developed in NASCAR over the years, the motorsport has also helped develop lasting friendships among some of the racers. Judging by how three-time NASCAR Cup Series champion Tony Stewart and 15-time Most Popular Driver Dale Earnhardt Jr. act around each other today, you’d see that they’re best buds. However, things weren’t always that way.

On an episode of the Dale Jr. Download podcast back in 2019, the two retired NASCAR drivers looked back on a particularly volatile Xfinity Series race that ultimately ended with the two becoming good friends.

The first time that Dale Jr. and Tony really got to know each other was at Pikes Peak International Raceway back in 1998. Junior, who was driving the No. 3 Chevrolet for Dale Earnhardt, Inc., explained that he was trying to pass Stewart on numerous occasions and gave him some good bumps in the process.

Well, eventually Stewart had enough, and, during the restart, he punted Earnhardt’s race car down in turn one. After the racers finished their final lap, both of the drivers were asked to come to the NASCAR hauler to chat about the event.

Once the two teams got to the NASCAR hauler, a further altercation occurred between Earnhardt and Stewart’s crew chief, which led to some shoving and harsh words being used. Of course, with Dale Earnhardt Sr., a.k.a “The Intimidator,” as your dad, you’re not going to back down.

Stewart distinctly recalls the way that Earnhardt laid into him during the meeting, though the Stewart-Haas Racing owner knew that Dale Jr. was more accustomed to NASCAR rules and stock car racing etiquette than Stewart was. It took Stewart, who was essentially fresh off an IndyCar series championship, some time to realize that Earnhardt was right in the argument, but he eventually came to terms with what he did wrong during the race.

Eventually, the two drivers moved passed the event and continued on to the following series races. A week later, they met once again at the Milwaukee Speedway, but Stewart seemed to have quite a different mentality. Before the practice began, Earnhardt recalls Stewart coming up to him and stating, “Hey. man, we?re going to be racing each other a long time, so let?s be friends. Let?s not run into each other anymore. Let?s not drag this out.”

Earnhardt admitted that he would’ve never reached out in that way, so he was happy that Stewart did, and they’ve been friends ever since. It’s always good to have allies on your side, but all friendships are bound to get challenged in big-time races like the Daytona 500 and Southern 500 at Darlington. Just because they were cool with each other, doesn’t mean they weren’t fierce competitors. It’s just part of the game.

That said, I’m glad these drivers were able to stay on each other’s good side over the years.

WATCH: Jeff Gordon?s Net Worth: How the NASCAR Legend Earned the Big Bucks