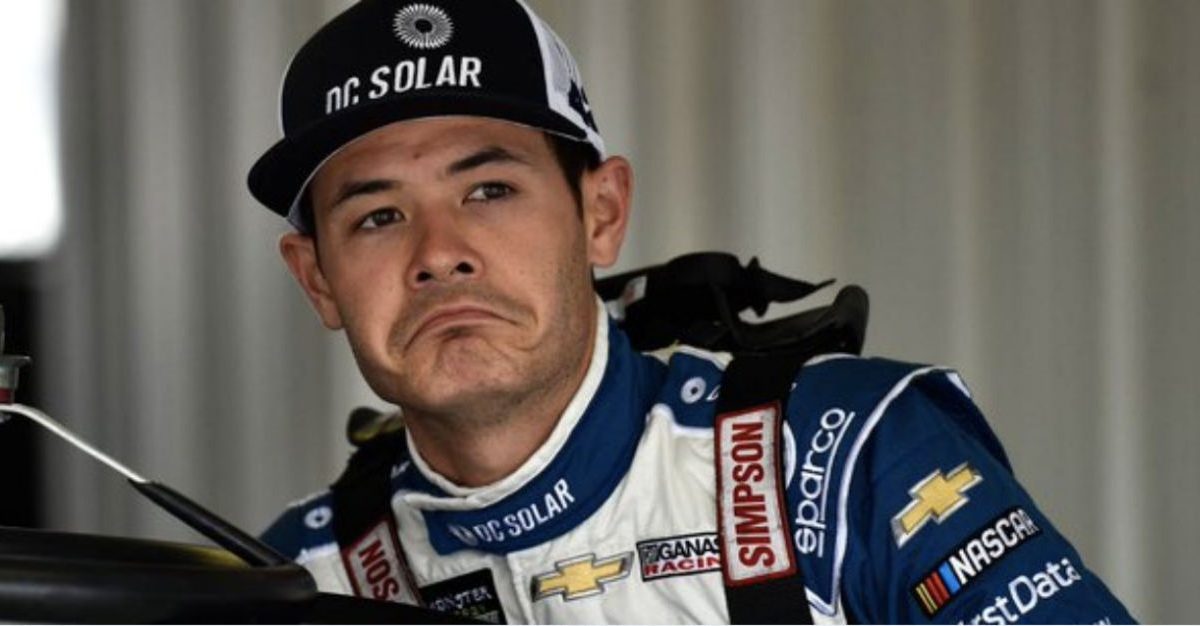 CHARLOTTE, N.C. (AP) ? Kyle Larson has been docked 10 points by NASCAR for a rules violation that could bring an end to his championship chances.

LARSON IN A MUST WIN SITUATION AFTER TALLADEGA PENALTY – OTHER PENALTIES: #KyleLarson‘s job for this weekend's race at Kansas Speedway just got a little bit harder as a result of an L1 penalty after last Sunday's race at Talladega. The No. 42 team has been penalized 10 driver and owner points, crew chief Chad Johnston has been fined $25,000 and car chief David Bryant has been suspended for one race. The No. 42 team violated Section 10.9.9.d in the NASCAR rulebook, which states; Damaged vehicle repair, regardless of how the damage occurred, is permitted to have original body parts removed or reattached in their original location with fasteners and/or tape only. After suffering lack of speed all weekend, Larson spun in the second stage due to a flat tire but came back for an 11th place finish. Larson is now 36 points behind the cut off spot on making the next round in the chase for the championship, making this weekend’s elimination race at Kansas a must win. As for the rest of the Monster Energy NASCAR Cup Series, the race winning car of #AricAlmirola was found to have an unsecured lug nut after the checkered flag. Crew chief Johnny Klausmeier has been fined $10,000 for the infraction. NASCAR also handed out a few penalties to crew chiefs in the Camping World Truck Series. Joel Shear Jr., crew chief for Johnny Sauter, Graham Bruce, crew chief for Stewart Friesen and Chad Kendrick, crew chief for Austin Hill, were all hit with a $5,000 penalty for violating Section 20.4 of the rulebook, which notes; Air is not allowed to pass from one area of the interior of the vehicle to another or to the outside of the vehicle. Photo: Chip Ganassi Racing. #NASCAR #IndyCar #F1 #Formula1 #Racing #Motorsports #Race #Racecar #Motorsport #Speed #Chevrolet #Chevy #Ford #Toyota #TalladegaSuperspeedway #Talladega #Alabama @talladegasupers

Chip Ganassi Racing was penalized for breaking NASCAR’s policy on damaged vehicles during the race at Talladega Superspeedway. The points deduction announced Wednesday drops Larson to 36 points below the cutoff for the final transfer position to the third round of the playoffs. NASCAR will cut the playoff field from 12 to eight drivers following Sunday’s race at Kansas.

Rough weekend for us. Guys worked hard to try and make it faster but couldn’t figure anything out. Able to salvage an okay finish but still in must win mode next week. Glad Kansas has been a good track for us.

Larson crew chief Chad Johnston was fined $25,000 for the infraction and car chief David Bryant was suspended one race.

Read More: Kyle Larson Says That He Was ?Caught off Guard? by Kasey Kahne?s Retirement Announcement