Dale Jr.’s Former Crew Chief Has Plenty to Say About the NASCAR Great 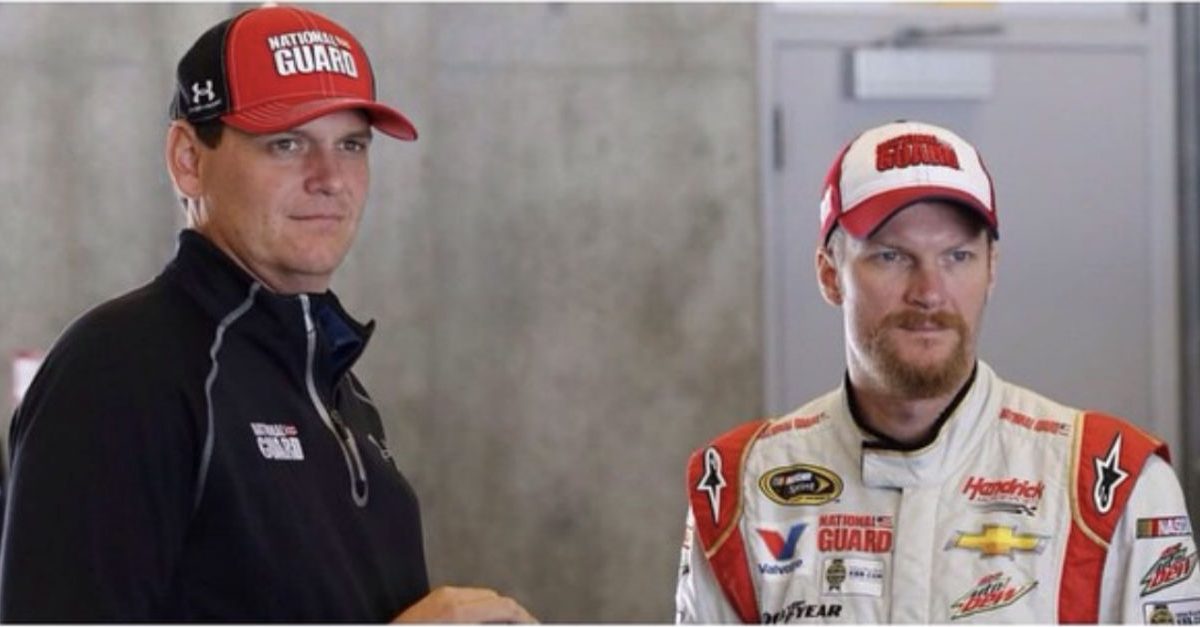 It was back in 2014 when Dale Earnhardt Jr.‘s crew chief at the time, Steve Letarte, left the team at Hendrick Motorsports to pursue a NASCAR analyst’s career at NBC Sports. Now, some four years later, with Dale just recently having donned the broadcaster’s headset, the former teammates have been reunited as NBC colleagues. It’s a sequel of sorts to the pair’s first period together from 2011-2014

Now, three years may not seem like a long time, but Letarte and Junior definitely experienced their highs (five victories, including the Daytona 500) and lows (crash at the 2011 Daytona 500, 2012 concussion) together. So much so that Letarte wrote a book about that time called Leading the Way.

In an interview with For the Win, Letarte opened up about the time things really fell into place for him and Junior ahead of the 2011 Kobalt Tools 400 in Las Vegas (where Dale would end up placing eighth).

“Daytona was highs and lows, Phoenix was a disaster, we went to Vegas and it looked like a disaster. ? I?ll never forget that he, Amy and myself drove back down into the city to eat that night. And I?m not a very patient person, and as we drove down Las Vegas Boulevard ? I drove ? it was stoplight after stoplight.”

“And as I lost my patience, he looked at me like, and his look said it all. It was like, ?Man, why are you all worked up? We?re just going to dinner. Sit back and relax.? And it was that moment that I kind of laughed.”

“We had so many different role reversals. When he?s in the race car, it was my job to keep him calm, keep him relaxed. All he could see was what was out the window. And the fact that he was relaxed in the frustration of traffic that was irritating me, I know it sounds silly, but it just encouraged me that you know what? He really is a pretty patient guy, so remind him that when he gets out there on a race track. And I know it?s a simple story, but there?s a lot that comes out of that story that helped us out.”

As a 15-time most popular driver, Dale Earnhardt Jr. is probably the most celebrated NASCAR star of all time from a fan perspective. When your fan group has a name for itself (JR Nation, represent!), the widespread appeal pretty much speaks for itself.

It was even before their first race, at an award show in Vegas, when Letarte realized just how popular Junior really was.

?It was probably a 50- to 100-foot walk through the hallways of the Bellagio from the ballroom. Walking through those doors and seeing the mass of people surround him ? even someone like me who has been blessed to be around a bunch of famous people ? it was breathtaking. At that moment, I realized this guy who I?m buddies with or I?m getting to know, he is a bigger personality than anyone I?ve ever been around. How he handles that with grace amazes me. ?

?It was enlightening to me that I really don?t know what it?s like to be him, so don?t act like I do. And I feel like that was a great moment in our relationship because it forced me to meet an all encompassing Dale Jr. ? not just the guy I want to hang out with and drink beer with and go race with. You can?t separate him.

?He?s Dale Jr. 24 hours a day. He does not get to not be himself, and while there are privileges of being a superstar, there are challenges. And I think all of those helped me understand ? all the challenges of him being him.?

Of course, with all those challenges come with plenty of successes and happiness. Just look and listen to Dale behind the booth. You can’t fake that excitement!