Did you ever wonder why your refrigerator looks like it "belongs" in your kitchen? Or why Coca-Cola vending machines are so highly collectible? Perhaps you're wondering most of all why we're asking questions about appliances in an automobile blog.

It turns out that the same man who understood how to make American machinery look unobtrusive in the household is the same man who would make transportation of all sorts fashionable: the Father of Industrial Design, Raymond Loewy.

And yet, unless you're a big history buff or in a mechanical engineering field, you might not be aware of exactly all of the contributions Raymond Loewy made to American industrial design.

From the cover of Time Magazine to his own autobiography Never Leave Well Enough Alone, Raymond Loewy was a man who appreciated thoroughness and a sense of humor; therefore, it is time the automotive and transportation industries acknowledge the man without whom our roadways might be very bland and uninteresting. 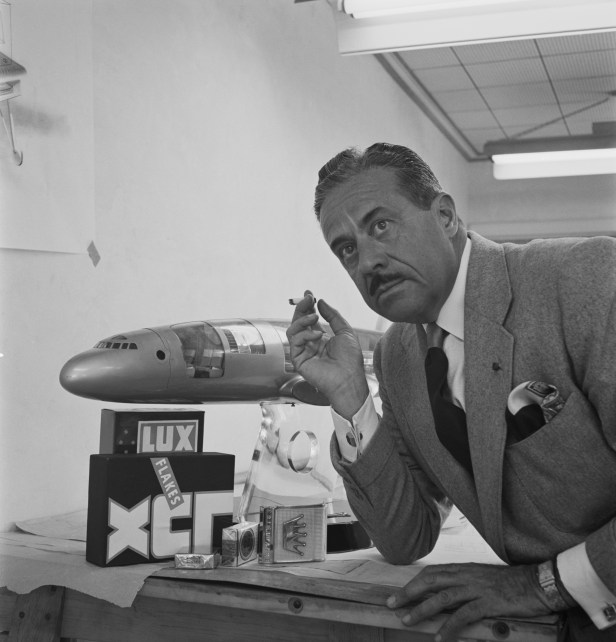 Before The Redesign of Design

Raymond Loewy was born in Paris, France on November 5, 1893. His parents were middle class, and Loewy received a fine education. His father was a professional business journalist, so reading and writing were front and center at the Loewy family household. Raymond went so far as to publish his own newspaper as a teenager.

Still, young Raymond Loewy was constantly drawing. His favorite subjects were automobiles and locomotives, so his mother took him to the rail yard often, so he could sketch away. But, Loewy wasn't just fascinated by how things looked; he was interested in how they worked, as well. In his teenage years, he patented and sold plans for a model airplane, and built model speedboats that earned him early notoriety. He received a degree in engineering from the University of Paris, and it seemed that he was on track for an impressive career.

However, World War I squelched any immediate plans. Raymond Loewy joined the French army, and served on the combat fields for over four years. Upon his release from the army, he discovered his parents had died from the Spanish flu. With just $40 in his pocket and the Army uniform on his back, Loewy boarded the ship the SS France and headed to America to join his brothers, who had already cut out a living abroad.

Upon reaching the United States, Raymond Loewy initially planned to find work with General Electric. It seemed a good place to put his various skills to the test.

But, one way or another, things happen the way they're supposed to, though often the road includes a lot of strange twists and turns. Thanks to his brothers contacts, Raymond Loewy was offered a job as a window dresser for Macy's. Sadly, they did not appreciate his minimalist, streamline approach to the task.

However, the sketches he had completed on the ship to America caught the attention of all the right people, and he was soon employed as a fashion illustrator. Clients included Harper's Bazaar, the Butterick pattern company, as well as Broadway legend Flo Ziegfeld. He even designed uniforms for Sak's Fifth Avenue employees.

Simultaneously, Raymond Loewy was rubbing elbows with some very important people who would only help bolster his career. He was designing print advertising for the White Star shipping line, Pierce Arrow motorcars, and more. While he was bored at using his skills to promote what he considered a bunch of "junk," he could hardly know that he was about to impact the very way humans interact with the technology around them. 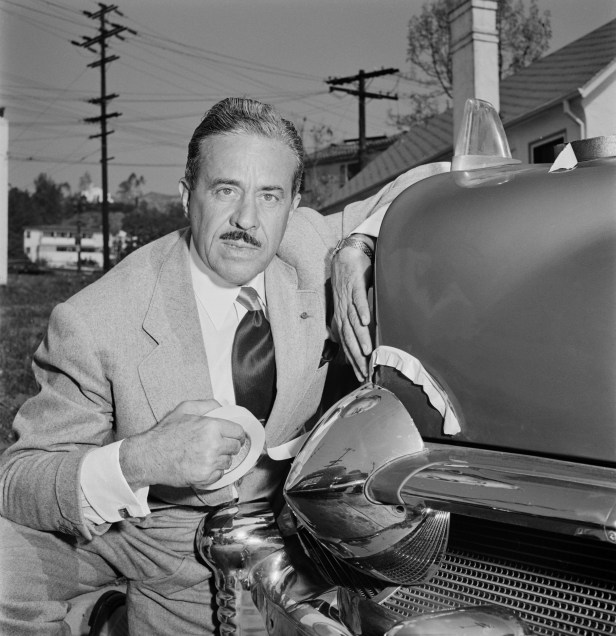 "The Better Looking Will Outsell the Other"

Before Raymond Loewy, American industrial design simply wasn't a concept. If you look back to the technology that was common in the US prior to 1930, you'll notice a lack of "coolness." Everything mechanical is big, bulky, functional, and lacking in style.

His first foray into industrial design was the redesign of an industrial mimeograph duplicating machine for Sigmund Gestetner. Within three days, Loewy had created a new concept, and his career took off.

While Raymond Loewy and his design firm are legendary for contributions to product design, including the Sears-Roebuck Coldspot refrigerator, Loewy maintained that nothing would be out of his firm's realm of design. Helping clients build a "corporate identity" was important to the designer, which is why Coca-Cola, Nabisco, Lucky Strike, Exxon, Shell Oil, and other mid-century American brands endure today. While modern designers may work to create and implement just one factor of business, Loewy and his team were involved in every aspect. For International Harvester, they created tractors, trucks, 1,800 dealership buildings, and a logo to boot.

Raymond Loewy & Associates worked hard to create a brand vision, in some cases creating building for department stores that could streamline their business operations in order to help them maintain that vision. Loewy's team would actually wander through these locations and note how consumers were interacting with displays, observing how lighting, positioning, color, and more influenced buying habits.

Raymond Loewy and the Experience of Transportation

Raymond Loewy never stopped being fascinated with railways and automobiles. He jumped at the chance to interview with president of the Pennsylvania Railroad, Martin Clement. Clement was looking for updated garbage cans in Penn Station. Loewy accepted the assignment, and then delivered the GG1 electric locomotive. Capable of hauling 25 passenger cars at a speed of 100 miles per hour, it was a marvel of its time, and it was fully stylish and functional, inside and out.

Next up was the K-4 Pacific and the S-1 steam locomotives. Both were faster, bigger, and much more attractive. Loewy's keen sense of design included signal towers, on-board menus...even the clocks in the station were updated to meet his design standards. His interior design could be seen in famous trains such as the Burlington Zephyr, the Santa Fe Super Chief, and the New York to Chicago Broadway Limited.

Airplanes were a new and exciting method of mass transportation at the time, and it was abundantly apparent that airline customers could only be treated to the best while they were in the air. Loewy's designs can be found in the interior of the Boeing Stratoliner airliner, the Lockheed Constellation, and the Air France Concorde. Later on, he would update the interior of Air Force One for his buddy John F. Kennedy, and was tapped by NASA to help create a functional interior for Skylab in 1967. His most important contribution to the space program? Adding a porthole to the interior so astronauts could gaze upon the new frontier around them.

Greyhound Bus Company consulted with Loewy regarding their color scheme, and ended up with the sleek, dashing logo still used today. Loewy also incorporated air conditioning, restrooms, and air suspension into the prototype of a double-decker city bus known as the "Scenicruiser." Customers and corporate were delighted by these updates. 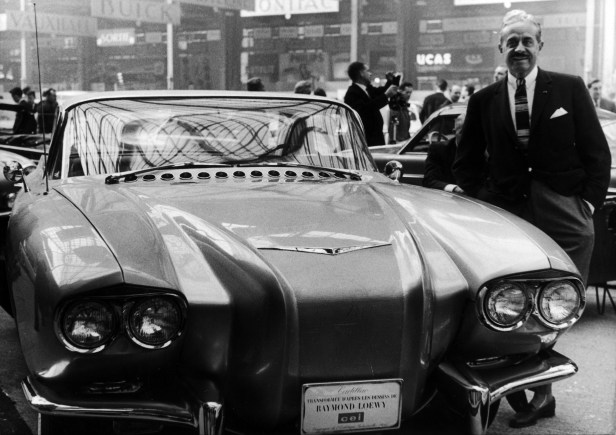 Automobiles were another passion. Loewy designed the 1932 Spyder and 1934 Sedan Hupmobiles for Hupp Auto. The Sunbeam Alpine convertible coupe was designed in his London office. But, perhaps the most enduring of Loewy's automotive design work was that which he produced for Studebaker.

While we think of smaller, lightweight vehicles as more of a modern innovation, Raymond Loewy actually proposed the concept to Studebaker in 1937. Lighter meant more fuel efficient. That seems contradictory from the man who designed the Exxon logo, but he wasn't wrong. The 1938 Studebaker Champion and the 1939 President were the first two vehicles designed by Loewy, thus beginning a long relationship between the designer and Studebaker.

Perhaps his most famous design is that of the Studebaker Avanti. An all-fiberglass vehicle with disc brakes and a dashboard designed for nighttime visibility, the Avanti managed to hit 29 speed records on the Bonneville Salt Flats in 1962.

Raymond Loewy finally sold his business in the 1970s, retiring in his eighties. While much of the technology that he helped streamline and design has been replaced by newer and more advanced options, it is very easy to see how Loewy's attention to detail and making usable things better looking has impacted our daily life. His holistic approach to the consumer experience has truly heightened our awareness of the place of comfort and convenience in the areas of travel and transportation. Imagine what bus seats would be like, or how bland a trip to the fuel station would be, if it weren't for the genius of an automobile-obsessed boy from Paris, France.