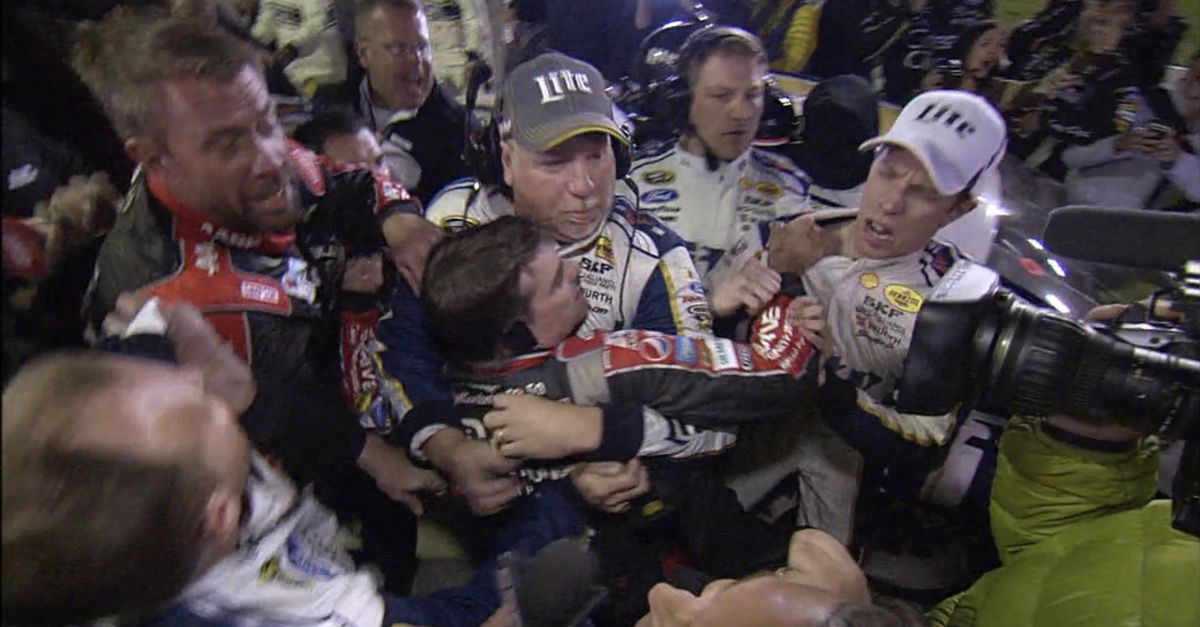 For quite some time now, NASCAR’s ratings have been steadily declining. Not only are people not tuning in to races on their televisions, computers, or smart devices, but track attendance numbers have been dropping as well.

Some NASCAR experts point to the retirement of big-name veterans like Dale Earnhardt Jr., Tony Stewart, and Jeff Gordon, while others have called upon the sport’s “young guns” to pick up the slack. Whatever the ultimate problem, I have the solution. It may not be pretty, it’s certainly controversial, but it would definitely help to generate a massive amount of hype from a pure entertainment perspective.

What NASCAR needs is…*drumroll*…Ok, you already know what it is from the headline, but I’ll keep the suspense going anyway…MORE FIST FIGHTS!

All you have to do is look back on the fight between Cale Yarborough and the Allison brothers at the 1979 Daytona 500 to know that scraps on the infield draw in significant eyeballs. That fight got so much attention that Richard Petty winning the whole thing even got pretty much overshadowed.

The simple truth is that people love to watch other people fight. It’s been a thing since the days of gladiators and probably even before then. But a fist fight between NASCAR drivers is intense on a completely different level. Why? Because it’s so unexpected. Having fists fly after there were just multiple ton machines throttling at speeds of around 200 MPH for several hours? That’s like injecting adrenaline into adrenaline. It’s like something you’d see in a Fast and Furious movie.

Just think back to even the past few years or so, and you’ll find a number of epic NASCAR dust-ups.

There’s Jeff Gordon versus Brad Keselowski in this all-out brawl from back in 2014.

Just two years earlier, you had Clint Bowyer running after Gordon like he was an entrant for the freakin’ WWE Royal Rumble.

Two years before that, there was the scrap between Jeff Gordon and Jeff Burton right on the damn track. I mean, it doesn’t get any more badass than that.

Ok, so pretty much Jeff Gordon versus anyone made for grade-A television. But you can even look back as recently as 2017, when Joey Logano and Kyle Busch duked it out in Las Vegas, to find a decent NASCAR fight. Which, I guess, begs the question: How would fist fights actually save NASCAR if they’ve been happening, but ratings have still been experiencing a decline?

Read More: Remembering the 1979 Fight Between Cale Yarborough and the Allisons

There are two reasons that fights, in their current state, are not doing enough to increase ratings:

Sure, a lot of people want to see Kyle Busch get his clock cleaned (sorry Kyle, that’s just the cold, hard truth), but they want to see a good guy dishing out the justice. Like Batman beating up the Joker. Yes, I am saying that NASCAR needs to be more of a superhero movie, with heroes and villains.

I doubt it will happen, but maybe the fist fight is what will end up saving NASCAR. But, until then, there’s good ol’ reliable YouTube.