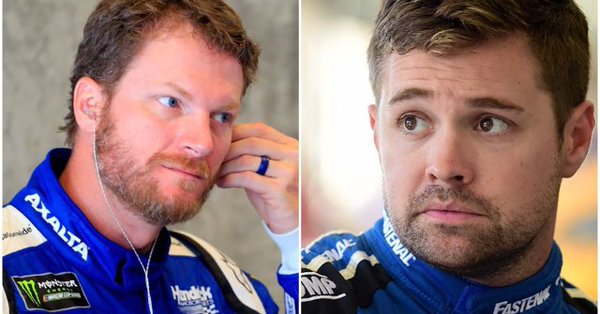 By now, every NASCAR fan and their great grandma is fully aware of the mayhem that Ricky Stenhouse Jr. caused at Daytona over the weekend. I mean, when you basically instigate not one, but two wrecks in the same race that knocks out about half the field, you’re probably going to be directing just a little bit of attention towards yourself.

Now, there is some discrepancy as to whether Ricky is entirely to blame for the on-track craziness (Brad Keselowski pointed a finger at a bad block from William Byron), but even still, there’s probably at least a few drivers who are pretty steamed at Ricky following the crash.

On a recent episode of NASCAR America, Dale Earnhardt Jr., who also just so happens to be familiar with his fair share of wrecks, discussed the hoopla surrounding Stenhouse’s precarious situation and offered some advice on how the 30-year-old Memphis native should go about reaching out to fellow drivers.

How does Stenhouse reach out to drivers he wrecked? Call? Text? DM? #Wednesdale #NASCARAmerica

?If he text messages any of these drivers, that just shows that he?s not truly remorseful,? Junior said, according to NBC Sports.

Earnhardt was also joined on the show by Kyle Petty, and the two looked back on how making amends with drivers you wronged on the track was a lot different in the older days of NASCAR.

Petty himself remembered the time when he intentionally wrecked Junior’s dad (notoriously known as The Intimidator) after the late Dale Sr. had banged him up a bit in a previous race.

After the race, the exchange between the two was short and to the point.

?I just got tired of your shit,? Petty had said.

?I thought so,? Earnhardt replied.

According to Dale Jr., cell phones make those types of interactions in the immediate aftermath of a wreck few and far between.

?In today?s world with technology and all that ? if you?re gonna call a guy, call him the next day,? Junior said. ?If you wait until the next race weekend, the guy thinks that you?re not going to bring it up.”

As you probably know, Junior knows a thing or two about having to get back in drivers’ good graces.

Considering Junior’s experience, the Pied Piper had some pretty solid advice for Stenhouse, which he hopefully follows ahead of his next race.

?For Ricky, going forward, he needs to try to eliminate this from his next plate race,? Earnhardt said.

?When he goes to Talladega later in the season, try not to continue this trend. Put a little space between this race and the next time you want to do something stupid. That?s what I always tried to do. If I screwed up, I?d lay low for a while.?