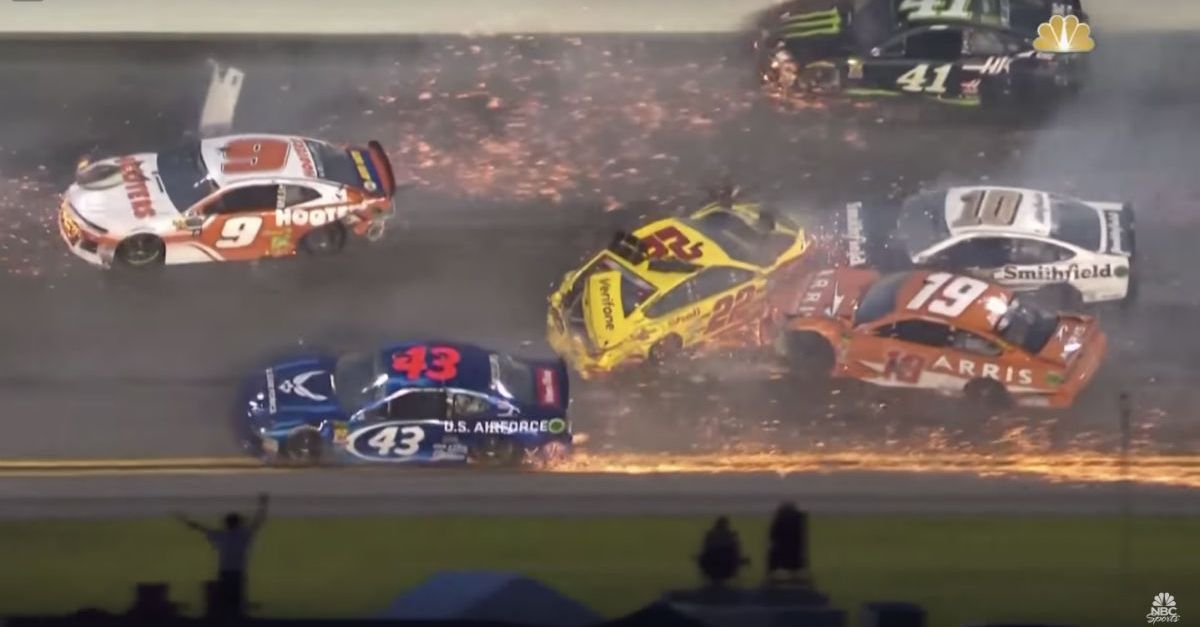 Stenhouse triggered two wrecks Saturday night that collected more than half the field and knocked out former Cup series champions, Daytona 500 champs and a slew of perennial race contenders.

“It’s been crazy partly due to a few of my issues,” Stenhouse said over the radio on NBC.

Stenhouse somehow missed the final crash of the race won by Erik Jones when Darrell Wallace Jr. spun Clint Bowyer and sent cars careening into the infield. Bowyer and Stewart-Haas Racing teammate Kevin Harvick each took off their helmets and shared a laugh over the wild night as they walked on the track toward the ambulance.

“It was just kind of chaos out there,” said third-place finisher AJ Allmendinger. “There was crazy racing but we survived.”

Stenhouse survived, too; he finished 17th after a blown tire late sent him to pit road.

“It’s aggressive speedway racing,” Stenhouse said. “We needed the win to get in the playoffs.”

Stenhouse, who broke up in the offseason with retired driver Danica Patrick, started the melee when he tapped and turned Brad Keselowski, who was running third. Keselowski’s No. 2 Ford slammed into the side of Kyle Busch, and more than a dozen cars were unable to slow down.

Keselowski said it actually started with a “bad block” by William Byron, who cut in front of Keselowski and prompted him to lift off the gas.

“The 2 got wrecked and so did everyone else,” Hamlin said. “It usually happens much later in the night.”

Added Joey Logano: “When one car sits sideways in front of the field at 200 mph, you can’t get through it.”

Stenhouse was just getting warmed up in his No. 17 Ford. He wiped out two more contenders a few laps later.

Stenhouse tapped Kyle Busch and caused him to lose control. Busch’s No. 18 Toyota slid right and took out William Byron. Byron and Busch were running 1-2 at the time.

“Disappointing to get crashed out by the guy that caused the first crash,” Busch said.

Stenhouse, driving for team owner Jack Roush, won the first two stages and needed a victory to earn an automatic spot in NASCAR’s playoffs. The Cup series has been dominated this season by The Big 3 of Busch, Kevin Harvick and Martin Truex Jr. Busch and Harvick had five wins entering Daytona and Truex, the reigning series champ, has three. The 16-driver playoff field could have more drivers in on points than wins once its set in September.

Stenhouse was outside the top 16 headed into Saturday night at Daytona — the restrictor-plate track where mayhem usually reigns.

This was no exception.

“I was frustrated with myself for causing crashes like that,” Stenhouse said.

Hamlin, who won the closest Daytona 500 in race history in 2016, said on Friday the elements were there for the race to turn into a disaster.

“I think that the cars are going to be closer together, less room for error, most likely more wrecks,” he said. “And I think this race always lends itself to being more of a wreck-fest than ones in the past, which makes it very exciting.”

The first wreck sent cars skidding and sparking in every direction — seven-time champ Jimmie Johnson made the save of the night when he dropped down and just survived the debris — and Hamlin was caught up in the mess.

“Now it’s a total crap shoot,” he said Saturday outside the care center. “It looks like most of the contenders that battle for these races are taken out, but you never know. It could be pretty exciting at the end.”

Truex decided at one point to drop back and ride in the back to avoid getting collected into another accident.

READ MORE: It Looks Like Ricky Stenhouse Jr. Has Definitively Moved on from Danica Patrick