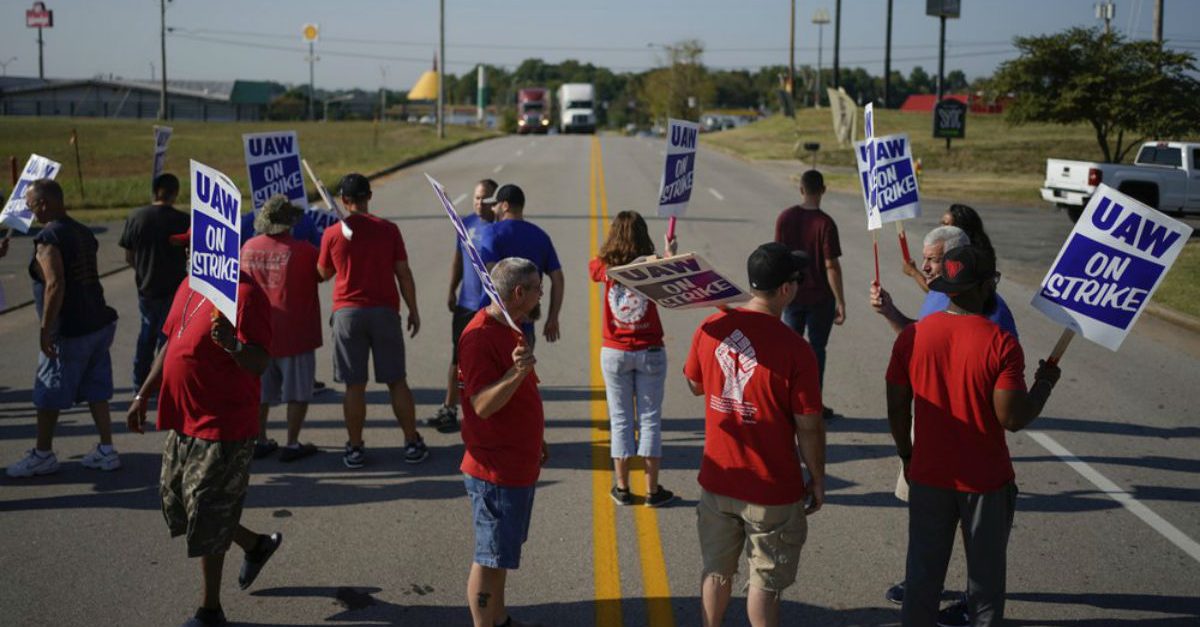 NEW YORK (AP) ? The strike against General Motors by 49,000 United Auto Workers entered its second week Monday with progress reported in negotiations but no clear end in sight.

Bargainers met all weekend and returned to talks Monday morning as the strike entered its eighth day.

A person briefed on the negotiations says they?re haggling about wages and profit sharing, new product for factories that GM wants to close, a faster route to full wages for new hires, and use of temporary workers. The person didn?t want to be identified because details of the bargaining are confidential.

Workers walked off their jobs early on Sept. 16, paralyzing production at about 30 manufacturing sites in nine states.

The #UAWstrike by 46,000 hourly General Motors employees entered its second week today, as negotiators returned to the bargaining table. https://t.co/DPgS54T2ii

Already the strike forced GM to shut down two Canadian factories that make engines, older-model pickup trucks and two car models. If the strike drags on much longer, GM likely will have to close more factories in Mexico and Canada because engines, transmissions and other components are built in the United States. Companies that supply parts to GM also will have to start cutting production.

Consumers this week will start to see fewer trucks, SUVs and cars on dealer lots. Cox Automotive said that GM had stocked up before the strike with a 77-day supply of vehicles. But before the strike, the supply of larger SUVs such as the Chevrolet Tahoe already was below the industry average 61 days? worth of vehicles.

Workers also will feel pressure. They got their last GM paycheck last week and will have to start living on $250 per week in strike pay starting this week.

The union wants a bigger share of GM?s more than $30 billion in profits during the past five years. But the company sees a global auto sales decline ahead and wants to bring its labor costs in line with U.S. plants owned by foreign automakers.

The top production worker wage is about $30 per hour, and GM?s total labor costs including benefits are about $63 per hour compared with an average of $50 at factories run by foreign-based automakers mainly in the South.

"The reality for nearly all auto workers is we’ve had to sacrifice. Ten years ago, employees gave up a fair wage & benefits to save GM & the automotive industry." https://t.co/nB1saBU39n

Issues that are snagging the talks include the formula for profit sharing, which the union wants to improve. Currently workers get $1,000 for every $1 billion the company makes before taxes in North America. This year workers got checks for $10,750 each, less than last year?s $11,500.

Wages also are an issue with the company seeking to shift compensation more to lump sums that depend on earnings and workers wanting hourly increases that will be there if the economy goes south.

They?re also bargaining over use of temporary workers and a path to make them full-time, as well as a faster track for getting newly hired workers to the top UAW wage.

GM has offered products in two of four locations where it wants to close factories. It?s proposed an electric pickup truck for the Detroit-Hamtramck plant and a battery factory in the Lordstown, Ohio, area, where it is closing a small-car assembly plant. The factory would be run by a joint venture, and although it would have UAW workers, GM is proposing they work for pay that?s lower than the company pays at assembly plants.

This is the first national strike by the UAW since 2007, when the union shut down General Motors for two days.