Alright, I’ll be honest, this video was pretty epic for being homemade. These guys managed to make their own Fast & Furious film using remote control vehicles, and it came out incredible.

Strap in, shut up, and hold on, because this film will take you for a wild high-speed ride. While this video is not affiliated with the actual Fast and Furious franchise, it was highly inspired by it. There’s no denying that there are a ton of similarities to the Hollywood movies.

This video includes just about everything. You’ve got drivers racing cars, remote control trucks, and off-road vehicles, along with some insane crashes. Some scenes are filmed so well it’s hard to even tell they’re using smaller-scale remote control cars. It also includes shots of the racers from inside the vehicles to give it an even more realistic appeal. Awesome stuff!

Now, putting together your own production like the above video isn’t exactly affordable for the average person. What is affordable, however, are these awesome collectible RC vehicles based on the actual cars from the Fast & Furious movies. Check these things out! 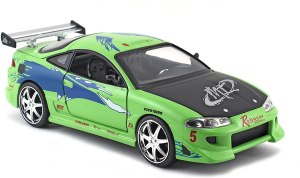 This diecast model from Jada Toys is a must-have if you’re into the F&F franchise. This Eclipse was featured in the very first movie, and just about everyone is familiar with it. As a remote control toy, this is easily one of the coolest vehicles to choose. 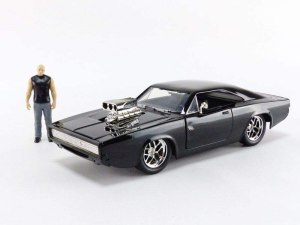 Of course, Dom’s infamous Charger R/T had to be included. This small-scale RC car is probably one of the most recognized vehicle from the entire series of movies. Having a classic toy like this would make your kid the coolest on the block. This car is certainly ready to run down the hallway drag strip. 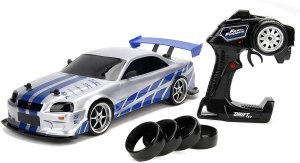 In memory of Paul Walker, we have his classic Nissan Skyline. Rocking the silver and blue color scheme, Jada Toys nailed this modeling. Affordable pricing aside, it even comes with a twin pack of tires. There’s nothing quite like a Japanese sports car capable of some drifting action!

Fans of Tokyo Drift will surely enjoy this toy modeled after Han’s Veilside RX-7. This 2.4GHZ drift RC car is perfect for the people who like to have a little fun sliding their cars around. It comes included with a turbo button, rechargeable batteries, extra tires, and even a pistol grip controller. 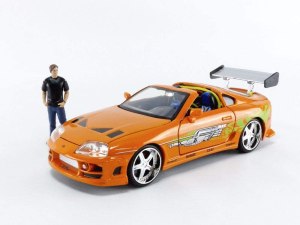 Is it really Fast and Furious if you don’t include the orange Toyota Supra? This model in particular is pretty awesome because it also includes a Paul Walker action figure. The car has functional doors, hood, and trunk along with real rubber tires. That’s one cool toy!