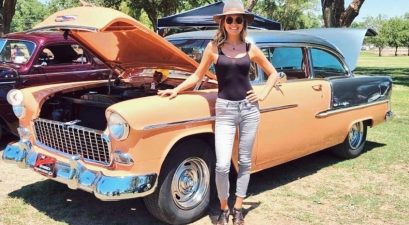 Dennis Anderson, the original founder of the Grave Digger truck, created and built quite the following for the black-and-green monster truck throughout his career. The Monster Jam truck is considered one of the most iconic and recognizable monster trucks in the world. Back in 2017, Dennis was injured while attempting to backflip the truck at Raymond James Stadium in Tampa, Florida. This ended up pushing him into retirement earlier than expected.

But, even though Dennis Anderson has ended his Monster Jam career, he still has children who followed in the same footsteps who can carry on the family legacy: Adam Anderson, Ryan Anderson, and the newest driver of the three, Krysten Anderson.

In 2020, Krysten broke the World Record for the highest leap in a Monster Truck at 33 feet and 9.6 inches. In 2021, she made her Stadium Tour debut at Houston on January 30. Clearly, Krysten has done enough to make her pops proud and then some.

Krysten Anderson is the daughter of Dennis Anderson and the first female driver of Grave Digger. Originally from Currituck, North Carolina, Krysten became an official driver back in 2017, which is around the same time as Dennis’s accident. She’s obviously been surrounded by the Grave Digger brand since she was a child, but now aims at defining her own name.

The monster truck driver has competed in the last three Feld Entertainment Monster Jam World Finals, as well as the All-Star Challenge in 2019. With Dennis’s legendary career, and Adam Anderson being a five-time World Finals champion, the female Grave Digger driver surely has a high bar set for her. With the last name Anderson, people naturally expect the “all or nothing” performances that they normally see from the truck.

Now, even though she’s got big shoes to fill, make no mistake, Krysten is already a very talented driver. She didn’t get put into that truck for nothing. But, she has potential to be iconic. Dennis stated that the first time he saw Krysten in a mud truck, he knew she had what it took. Krysten has no fear sending that 12,000-pound truck off some jumps to get some serious air time. Take a look at this video from her freestyle run at a Monster Jam event in Fargo, North Dakota back in 2018, and you’ll see what I mean.

Krysten proves to be a very positive role model for women out there, especially the little girls. They see this Monster Jam driver giving her all in that arena, and witness the extraordinary things women are capable of, firsthand.

I think with a little time, Krysten is going to prove to the world exactly what she has the ability to do. I wouldn’t be surprised to even see her become a World Finals champion down the road. Keep it up, Krysten!