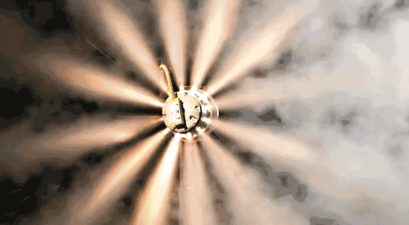 When you’re driving down the highway, it’s important to always keep your head on a swivel. Of course, you always want to be aware of other vehicles on the road, but you also never know when something can come flying from out of nowhere and smash right through your windshield. Even the most harmless of objects can turn into deadly projectiles when they’re coming towards you at high speeds.

Now, thanks to special technological advancements, such as Autopilot, making split-second decisions to avoid potential danger has gotten a whole lot easier. Tesla is leading the charge when it comes to these kinds of advancements, and for one Tesla Model 3 driver making his way through Los Angeles, California, that Autopilot feature helped get him out of one seriously sticky situation.

One second, the Tesla owner is humming right along, and the next, a tire somehow comes off a car driving in the opposite lane. The rogue tire hops the median barrier, heading directly at the Model 3. Just like that, the driver manages to avoid the tire at the last second. It’s a blink-and-you’ll-miss-it sort of moment, so you really need to watch it in slow motion to tell what’s going on.

Now, before you think that the Autopilot did ALL the work, think again.

“The Tesla did not dodge the tire, I did,” the Model 3 driver writes in the video’s description. “However, the autopilot gave me the time and view which allowed me to see the tire coming from the other side of the freeway. Also, the car stabilized very quickly after swerving to avoid getting hit. The car kept me from flipping over and spinning out into five lanes of traffic.”

How’s that for a close call?!