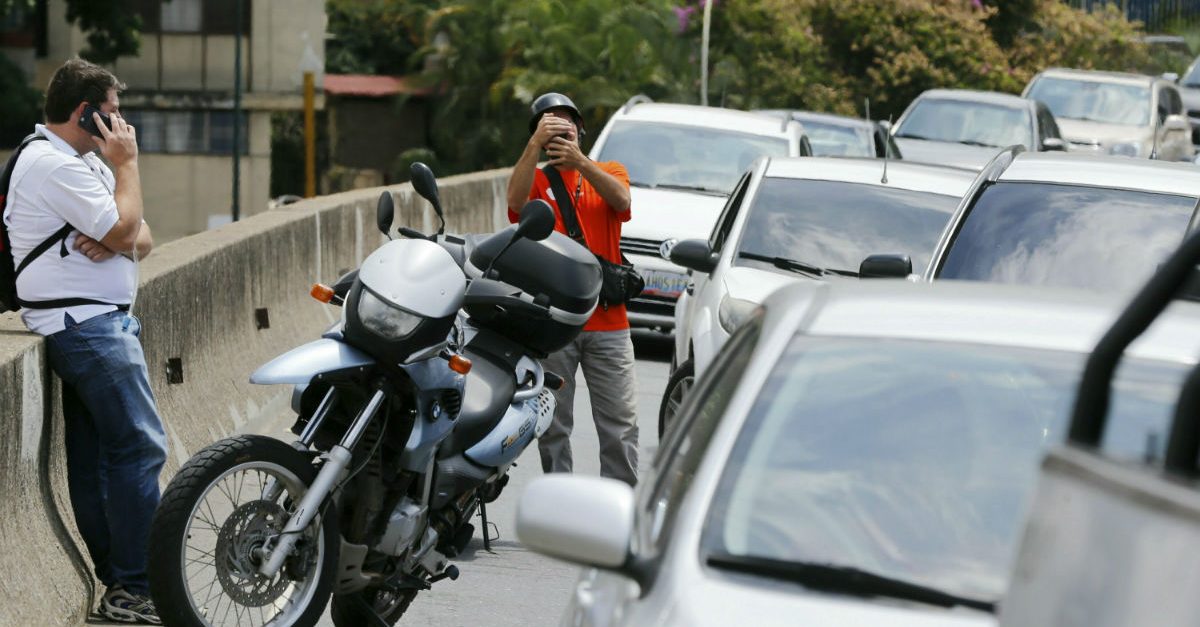 CARACAS, Venezuela (AP) ? A highway shoulder in Venezuela?s capital has turned into one of the city?s most sought-after destinations. It?s one of the few places residents could find the slightest cellphone signal strong enough to reach loved ones around the world during the country?s worst blackout.

?My siblings who live abroad are so worried about me,? said Ana Maria Suarez Napolitano, a 48-year-old attorney who had pulled over to the side of the major highway running through Caracas. ?They ask if I have enough food, enough water.?

Much of Venezuela went dark last Thursday, forcing residents to struggle since then through long periods in the dark without consistent electricity, running water, cellphone service and internet connection. After years of economic decay, shortages and hyperinflation that led to the mass migration of millions and separated families, those left behind said they felt more cut off than ever.

Residents with cars gravitated to a few stretches of highway and off ramps around the capital, Caracas. They were guided by the sight of bars on their cellphones and the dozens of other cars clogging up traffic as drivers squeezed to the roadside while holding their phones in one hand.

?We?re looking for a signal ? like everybody else,? said Valeria Mendoza, a 20-year-old communications student, who acknowledged she felt lost without her phone constantly pinging messages. ?There?s no light, no water, no nothing.?

The glow of Mendoza?s cellphone showed on her face as she sat Monday evening in the passenger seat of her father?s car with her younger brother in the back seat. She had just called her mother in the United States, calming her fears by explaining they were together and safe.

Years of crumbling infrastructure in Venezuela finally gave way when the massive blackout blanketed most of Venezuela in darkness for days. The lights have flickered back to life in most parts of the country, but intermittent outages persist as the government struggles to restore basic services that have been in decline for years, and some pockets of the country experienced a sixth day in the dark.

President Nicolas Maduro blames the crippling blackout on cyberattacks he claims were launched by the United States as part of an effort to oust him and clear the way for opposition lawmaker Juan Guaido, who has declared himself interim president and vowed to hold free and fair elections.

U.S officials and the opposition have denied any part in the massive failure, instead blaming two decades of rampant corruption and mismanagement in the once wealthy oil-producing nation, first by the late President Hugo Chavez and now under Maduro?s rule.

Tensions escalated late Monday, when U.S. Secretary of State Mike Pompeo announced the U.S. was withdrawing its remaining embassy staff, citing Venezuela?s deteriorating situation and the ?constraint on U.S. policy? caused by their continued presence in the country. He did not elaborate.

Maduro?s government disputed Pompeo?s account, saying early Tuesday that it had instructed the U.S. diplomats to leave within 72 hours because talks on keeping some U.S. representation had collapsed due to hostility from Washington.

Their presence ?entails risks for the peace, integrity and stability of the country,? Foreign Minister Jorge Arreaza said in a statement. ?These are the same officials that have systematically lied to the world about Venezuela?s reality and personally directed fake, flag-waving operations to justify an intervention.?

Meanwhile, millions of Venezuelans have struggled to get through daily life amid the periodic power failures.

Doctors said they couldn?t operate on patients in critical need. People desperate for water risked illness by converging on a badly polluted river running through Caracas to fill water bottles as scattered protests and reports of looting erupted in cities nationwide.

Shortages of basic food and medicine have led roughly 3 million Venezuelans to abandon their country in recent years for a better life in countries across Latin America, Europe and the United States.

But on Monday evening, many just wanted to make a phone call.

Diana Molero, a 38-year-old preschool teacher, rode on a scooter with her boyfriend to a highway off ramp so she could hear her sister?s voice in a call from Costa Rica.

Molero leaned against a concrete barrier and pressed the phone against her cheek as she talked over the noise of speeding traffic as the sun set on Caracas? streets, among the world?s most notoriously dangerous. She said it was worth the risk to let relatives outside of Venezuela know that she is safe.

?It?s the only option that?s left for us,? she said. ?Fortunately, we?re not the only ones here. The large crowd of people gives us a bit of protection.?