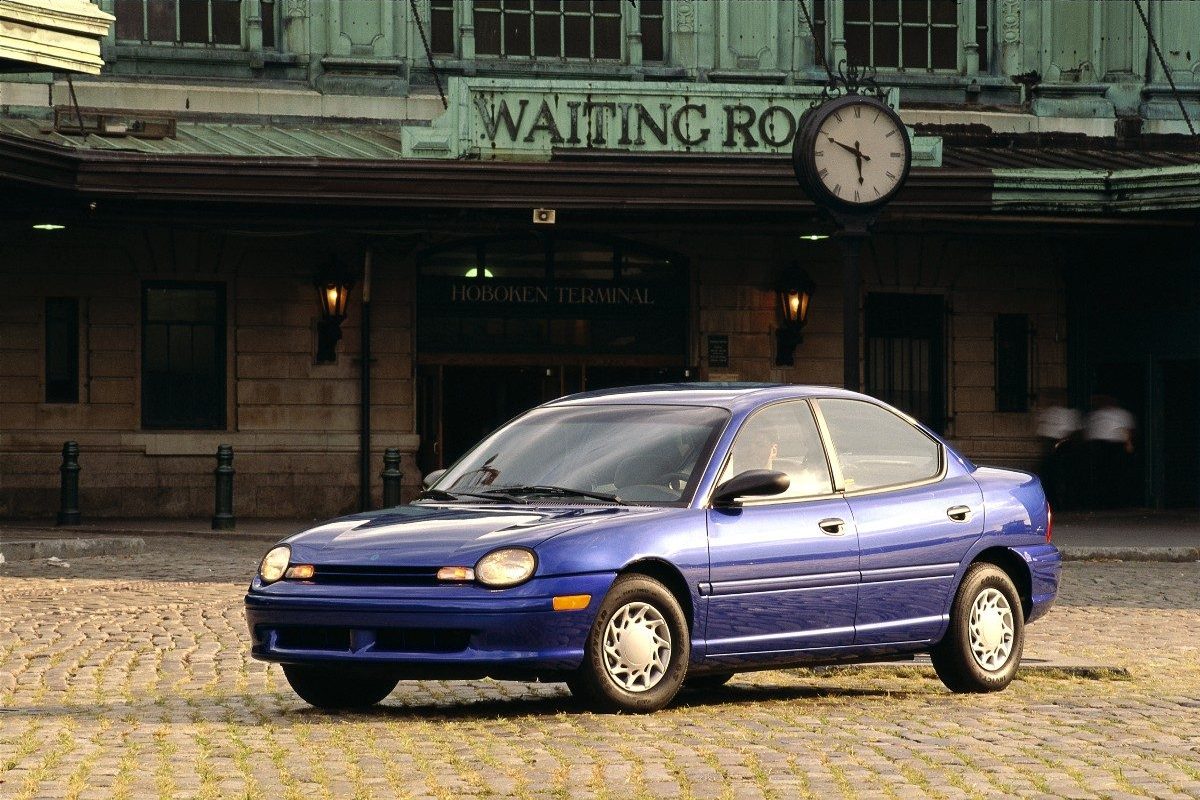 Anyone who was old enough to remember car rides in the 1990s has a memory or two involving the Dodge Neon. Though Neon models were produced from 1995 to 2005, there’s something about the early Neon models that reminds us of a simpler time. Perhaps it was the advertising campaign that simply said, “Hi.” More likely, it was the reasonable pricing — around $9,500 brand new– that put so many drivers, young and old, behind the wheel of a Neon.

Even though the Dodge Neon is now a curiosity to be found at the used car lots, there was a time when driving one was just about the coolest thing ever. Take a trip back to 1994, where it all began.

You may be trying to challenge your memory right now to remember why “Plymouth Neon” sounds more familiar than “Dodge Neon.” Great news: Both terms are technically correct.

Operating under the Chrysler Corporation umbrella, the Neon was introduced to replace both the Dodge Shadow and the Plymouth Sundance, which were essentially the same vehicle with two different names. The ’90s were a strange time, equal parts disco and grunge, and The Beatles made a comeback without ever having gone anywhere.

In early models, you can only tell if it’s a Plymouth Neon or Dodge Neon by the manufacturer name written by the pentastar logo. In 1996, some of them had the Dodge Ram’s head logo, while other had the Plymouth clipper ship. Otherwise, the vehicles are identical.

The First Generation of Neon

The Neon was unveiled in 1994 for its debut in the 1995 model year lineup. Overseas automakers such as Honda, Toyota, and Mitsubishi were cranking out low-cost, high-mpg vehicles that Americans were driving in droves. Therefore, the American automakers saw this as the opportunity to step up their game, responding with their own compact car options. Thus, the Neon was born.

The front-wheel drive compact car was offered in both sedan and coupe configuration, with the four-door sedan coming in base, Highline, and Sport trims. The two-door coupes were offered as Highline or Sport only.

Under the hood was a 2.0L inline-4 engine, which produced 132 horsepower in the base and Highline models. The Sport trim included a DOHC version of the same engine, which amped up the horsepower to 150.

Drivers had a choice of a five-speed manual transmission, or a three-speed automatic transmission.

The styling of the first generation can best be described as “friendly.” The big round headlamps were kinda cute, and Highline models got “bubble caps,” or bubble-adorned plastic hubcaps, while the Sport trim included a rear spoiler. Bright colors were offered, including Magenta and Aqua.

One fantastic fact about the first generation of Dodge Neon: Power-operated windows were only an option for the front windows. No matter how much money you were willing to spend on your Neon sedan, you only had the option of crank windows in the backseat.

The Dodge Neon Was Actually a Performance Car

No, seriously. A 150-hp engine isn’t super exciting, until you realized that it was very possible to mod up your Neon. They became incredibly popular with autocross drivers, so Neon took it upon themselves to create models that were ready to race without too much extra effort.

The ACR, or American Club Racer, had a lot of goodies on it that seemed out of place on a standard daily driver. The DOHC engine was on board, along with a stiffer suspension, Arvin struts or Koni dampers, and a five-speed transmission with a shorter fifth gear and a final drive ratio of 3.94. If that means nothing to you, you were not the demographic to which this version was marketed. ABS and the speed limiter were deleted, and drivers could delete the audio system and air conditioning, including the generously-offered standard cassette player.

A Neon R/T package was offered for the 1998 model year, much to the chagrin of serious street racers. Available on the Highline trim, the R/T model included rally stripes and a special rear spoiler, along with the more powerful engine.

The Neon got a refresh for the 2000 model year. Again, there was a Plymouth Neon and a Dodge Neon, with the only difference this time being the grille style on the Plymouth version.

The coupe retreated, leaving only the four-door sedan body style. The 2.0L I4 engine remained from 2000 to 2002, though the 150-horsepower version was now known as the Magnum configuration.

In 2003, a turbocharged engine option hit the streets to really shake things up. The 2.4L turbo inline-4 engine produced 215 horsepower. The catch was that this engine was solely available on the Dodge Neon SRT-4 trim, a spectacular replacement for the ACR that included sport-tuned ABS and specialized suspension, along with basket handle spoiler and speed-friendly body styling. This trim’s speedometer climbed to 160, and the five-speed manual transmission was the only option for the SRT-4.

The Neon R/T disappeared briefly, but came back for 2001. Trim levels now included SE, ES, SXT, and R/T, with the Dodge Neon SRT-4 at the top of the ladder. Fun new features included 15 inch alloy wheels on the ES and Dodge Neon SXT, along with a single disc CD player and standard power locks across the lineup. The rear windows never ended up getting the power window treatment.

So, How Come the Dodge Neon Didn’t Overtake the Honda Civic?

There are a lot of similarities between the two vehicles, as well as other low price/high fuel economy compact cars of their caliber. The Neon has a slightly larger wheelbase by less than two inches. The fuel economy is similar, with the early Neon reporting around 30 mpg on the city streets and 36 mpg on the highways. Honda was doing slightly better in the late 1990s, with Civic models managing around 36 mpg in the city. Still, Jeeps were selling like hotcakes, so it couldn’t all be centered around gas prices.

It wasn’t the crank windows in the rear, either. The Dodge Neon was taken down by the concept of safety. Side airbags weren’t introduced as an option until the 2001 model, and there were issues with the head restraints. The IIHS actually used the word “disaster” to describe the Neon, which doesn’t bode well for a popular daily driver.

The Dodge Caliber was waiting in the wings to take the Neon’s place. While a hatchback seemed a strange successor, it was clear that the Neon’s time was up.

Somewhere in the collective consciousness of the American automotive industry are fond memories of the Dodge Neon, or Plymouth Neon, if you prefer. In Mexico, a third generation Neon lives today.  Will it make it north of the border for a triumphant return?  Only time will tell.