Now, I hope all you drivers out there know this, but probably one of the last things you should do after getting into a high-speed accident is laugh and take photos of yourself. That may seem like too silly of a reaction to even bring up, but according to the uploader of the above video, that’s exactly what one careless driver did after slamming into a traffic barrier.

The video starts out with rear dashcam footage showing the aforementioned reckless driver weaving in and out of highway traffic at ridiculous speeds. The lunatic cuts in front of one car and then a semi truck, before the front dashcam shows him slamming into the barrier after cutting off yet another vehicle. Dust and debris fly into the high as the wrecked car spins out from one side of the road to the other.

You’d think the wildly erratic driver would have somewhat come to his senses post-wreck, but as it turns out, this actually wasn’t the case.

The driver who captured the dashcam video says, “I was driving back from camping. Other drivers stated he was driving erratically for a while. After the crash, he stepped out and was laughing and taking selfies.”

Now, I’m not going to say for sure whether or not any drugs or alcohol came into play here, but this definitely isn’t how your average, lucid person behaves in a situation like this. It’s really just sad how some people don’t care about their actions on the road, no many how many lives they put in danger.

In any case, this should be further proof of how seriously you should take defensive driving, considering how many crazy, irresponsible drivers are out there on the roads. And, hey, maybe even get a dashcam while you’re at it. 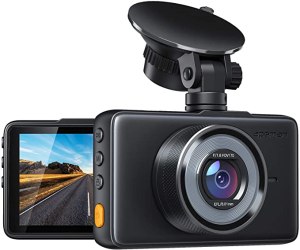 WATCH: Constance Nunes Is the Hottest Mechanic in the Business