Ouch! This guy did not see that one coming, but to be fair, neither did I. It’s funny how motorcycles can take you from having a great day to a bad one in only a split second. This rider was just cruising around in Moscow, Russia, but when he tries to get around a semi truck, he realizes very quickly he should have been a little more patient.

As the video starts, you’ll notice him on the highway, lane splitting between slow cars during a high-traffic hour. Keep in mind, this is perfectly legal in Russia. He comes up on a semi truck in the right lane and decides that the gap between the cars was too narrow, so he decides to try and make a pass on the right side instead. Unfortunately, the trailer of the semi blocked the riders view, and a road work barrier seemingly appears out of nowhere.

As a last-minute move, he jams his rear brake to try and avoid the barrier, but he was past the point of no return. He slams directly into it, and you can almost feel the pain through the screen. With his pride hurt, he’s quick to jump back up onto his feet and shake off the hit. The rider picks up his bike and gets it to the side of the road to assess the damage. While the bike only had some scratches, he himself ended up with a fifth metacarpal fracture.

This is why it’s always important to be aware of your surroundings. If you can’t see around the object you’re trying to pass, it’s a risky move to go for it anyway. It was an honest mistake, but sometimes that’s all it takes to bring some sense to you when you’re on two wheels. Hopefully, he’ll heal up quickly and be back riding again in no time. 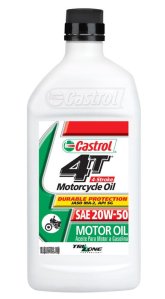