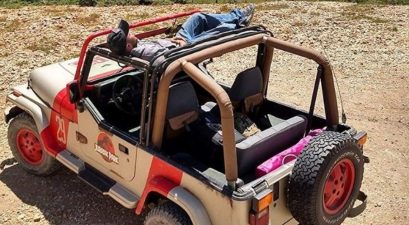 Back in 2014, a steam tractor pull in Pinckneyville, Illinois had to be worth the cost of admission for this awesome, ridiculous fire show alone.

As the tractor drives off into the distance, a fountain of fire sprays into the sky, much to the joy of countless onlookers. This is like some Game of Thrones: Redneck Edition type stuff. You know, like if the dragons were replaced with tractors. I’d say it has some serious spin-off potential. Hey, George R.R. Martin, let’s make this happen.

Read More: This Dodge vs. Ford Tug-of-War Pits Pickup Truck Against Tractor, and You Can’t Really Have a More Dominant Performance Than This

Judging from the engine specs provided by Josh Maschhof, the owner of the tractor, this thing may not be winning any drag races in the near future, but it’s definitely a certified beast in other ways.

“We run at 150 psi. The engine weighs around 42500 pounds, loaded with coal and water. Torque is 3000 ft lbs at 240 rpm. The sled was definitely weighted, and I know from experience first hand that the engine can drag the sled with the weight box all the way up and the bars dropped.”

Damn. Talk about full steam ahead. If you see this thing coming your way, you’re probably best off running in the exact opposite direction.