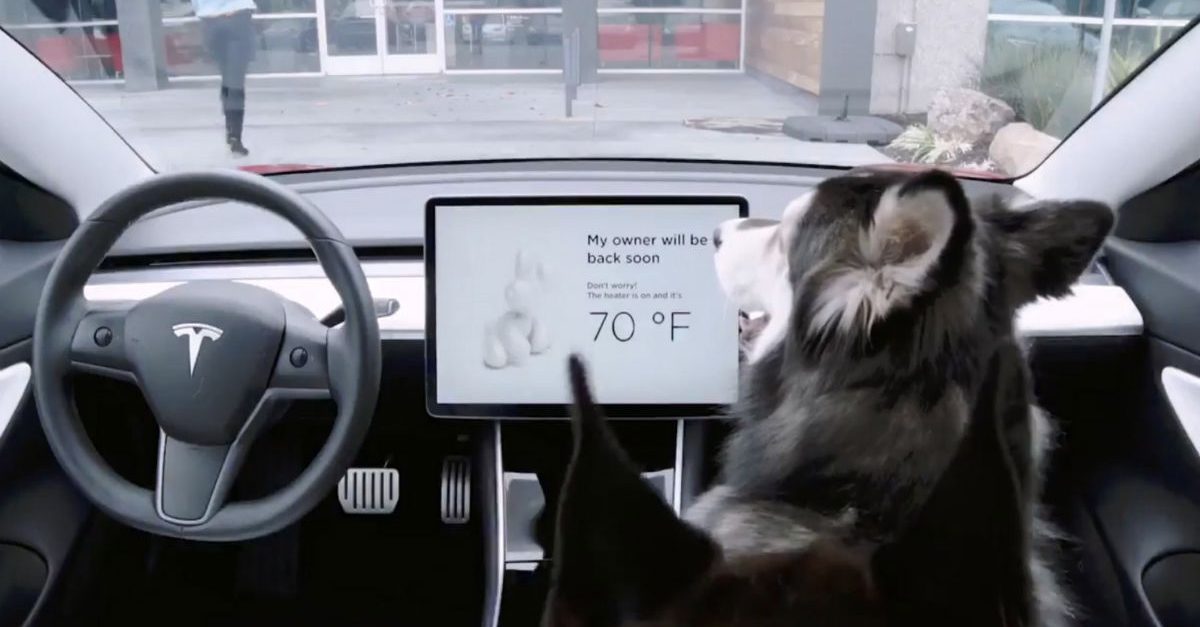 It seems like Tesla rolls out new features and software updates like Elon Musk sends out ridiculous tweets. Just one right after the other. But, there’s definitely nothing ridiculous about the electric car company’s new “Dog Mode” feature, which Tesla announced the release of on Wednesday, February 13.

Designed to keep your pupper cool and comfortable when you dip out of the car for a hot second, “Dog Mode” lets you set ideal temperature limits through the use of an intuitive climate control menu. Of course, it comes with plenty of top-of-the-line settings, such as a smartphone alert that tells you when your car’s battery is below 20 percent and a touchscreen that lets passersby know exactly what your car’s internal temperature is. You know, so they won’t go smashing any windows to let your pooch get some air.

Keep your dog comfortable in your car while letting people passing by know they don?t need to worry with Dog Mode. In addition to keeping the climate control on, the touchscreen will display the current cabin temperature. To enable Dog Mode, tap the fan icon at the bottom of the touchscreen when your car is parked. Set Keep Climate On to DOG, make adjustments within temperature limits, then leave knowing your pet will stay comfortable. Dog Mode will stay on after you leave your car. If you your battery reaches less than 20% charge, you will receive a notification on your mobile app.

Now, if you’re lucky enough to own a Tesla model (those things aren’t cheap), it’s important that you check your local laws before actually using “Dog Mode.” Not all states allow owners to leave their dogs unattended in their vehicles, regardless of its high-tech settings. Elon Musk can do a lot of things, but he hasn’t quite figured out how to circumvent state laws just yet.

As it turns out though, the idea for “Dog Mode” came from a tweet sent to Musk back in October. So, maybe all of his tweets aren’t completely ridiculous after all.

Tesla also announced that two other features — Sentry Mode and a dashcam upgrade — will be rolled out along with “Dog Mode.” Sentry Mode will use sensors to ensure that your car is protected while it’s parked, while the dashcam upgrade lets you record footage using the Tesla’s side and front-facing cameras.

Clearly, all three of these features are much more useful than “Fart Mode.”