Two drivers go at each other after a tense Xfinity race 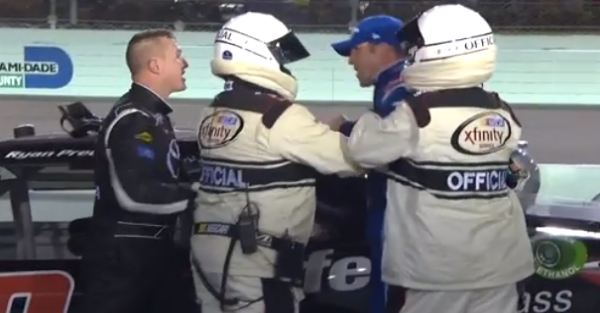 The excitement didn’t end at the finish line, as Ryan Preece and Elliot Sadler had to be separated by NASCAR officials after Saturday’s Xfinity race.

After an intense battle between JR Motorsports teammates Sadler and William Byron, the Xfinity Series Cup Championship was decided, but not without a little bit of controversy.

RELATED: The Xfinity championship will come down to these four drivers

In the final stage of the race, Sadler and Byron were going back and forth in what appeared would be a fight to the finish. Both racers were behind the No. 18 car of Preece, using him as a pick to gain an advantage, according to NASCAR.com. It worked for Byron as he went on to finish third and capture the championship, unfortunately the same can’t be said for Sadler.

Preece slowed down Sadler and shattered his hopes of walking away with a title. After Byron cleared both drivers, Sadler gave Preece’s car a hard shot.

“He cost us a championship and he’s not even racing anybody,” said Sadler on NBCSN. “If he wasn’t slowing us down, the 9 (of Byron) never would have gotten to us.”

Although the damage is done, according to Preece it wasn’t intentional.

“To be honest with you, if there’s a person you don’t want to cost a title, it’s Elliott Sadler,” Preece said. “Growing up I was a huge Elliott Sadler fan.”

“I was racing for an owners championship, I hate it,” he said “But I can’t take it back.”

Preece finished the race in fifth, while Sadler finished in eighth. However, JR Motorsports should be pleased as they had the top two drivers on the season in Byron and Sadler.