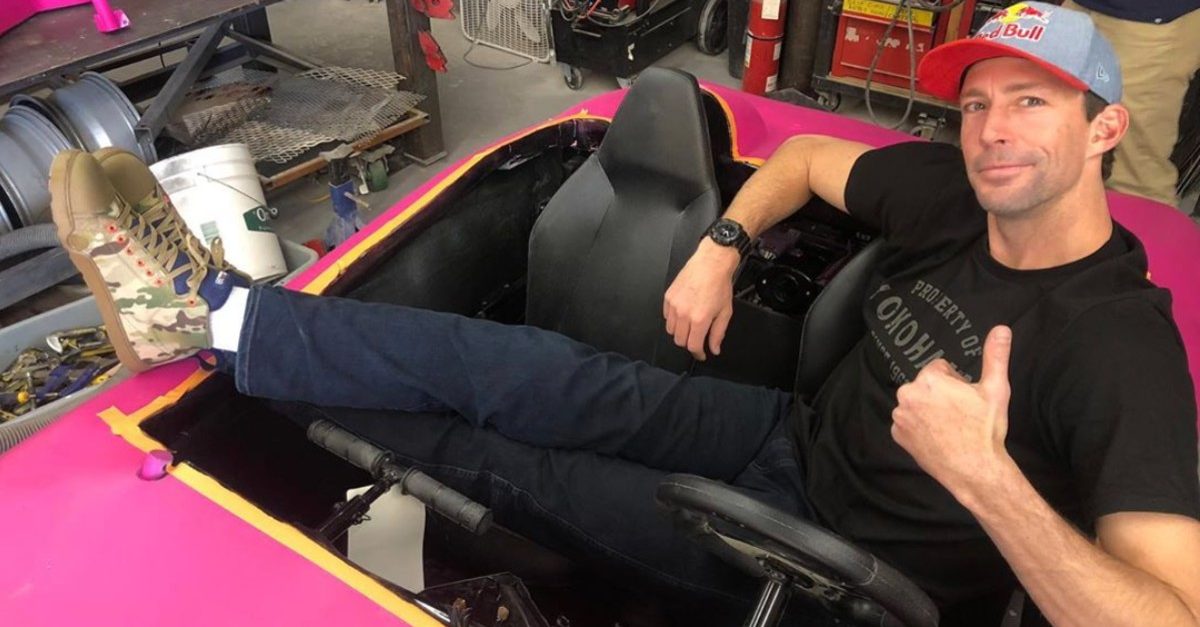 Travis Pastrana is an 11-time X-Games gold medalist, but the action sports star still feels like he has more to accomplish in the stock car racing world. On Thursday, the 36-year-old Maryland native announced via Instagram post that he would be making his NASCAR return.

Driving the No. 40 Niece Motorsports Chevrolet, which is typically driven by Ross Chastain, Pastrana will compete in Saturday’s Gander RV & Outdoors Truck Series at Kansas Speedway.

“Got a call last night from my former car chief Cody Efaw with Niece Motorsports asking if I wanted to race Ross Chastain truck on Saturday at Kansas,” Pastrana wrote in the Instagram post caption. “Pulling the old helmet off the wall. Should be fun!”

In the Instagram video itself, the motocross pro and Nitro Circus founder adds, ?I don?t know why; I wasn?t very good at turning left, but I?m going to pull the old NASCAR helmet off the wall.”

Here’s hoping Travis is a little bit better at turning left this time around!

Got a call last night from my former car chief #codyefaw with @niecemotorsports asking if I wanted to race @rosschastain truck on Saturday at Kansas. #putmeincoach @nascaronfox @nascar_trucksseries #herewego #turningleft pulling the old helmet off the wall. Should be fun! Green #40

Travis Pastrana made his NASCAR debut in 2011, well after he was an established household name in the action sports world. Competing in the Toyota All-Star Showdown, Pastrana finished sixth.

His second race, Denny Hamlin’s Short Track Showdown at Richmond International Raceway, did not end as well. After crashing out on lap two, Pastrana ended up finishing 31st. He didn’t let his bad luck get him down, though, and later formed Pastrana-Waltrip Racing, partnering with Michael Waltrip Racing and Gary and Blake Betchel. Under this partnership, Pastrana ran three races in the K&N Pro Series East.

In 2012, Pastrana made his NASCAR Xfinity Series debut, back when it was still the NASCAR Nationwide Series. In 2013, Pastrana ran his first — and only — full-time season in the Xfinity Series, driving the No. 60 Roush Fenway Racing Ford. He ended the season with four top-10s, a pole, and a 14th-place points finish in the standings.

On November 11, 2013, Pastrana announced via Facebook that he would be leaving NASCAR at the end of the season, due to a lack of sponsorship and a frustration with his performance on the track.

“I hate to quit and I hate to fail, but sometimes things work out as they should,” Pastrana wrote. “I’ve never been able to figure out the finesse required in pavement racing and that is disappointing, but I’m looking forward to driving more rally and racing more off-road trucks and there will be some announcements on those fronts shortly.”

Pastrana made his NASCAR comeback in 2015, and ended up finishing 16th in the Truck Series race at Las Vegas Motor Speedway. His next race would come in 2017, again a Truck Series contest in Las Vegas, where he ultimately raced to a 22nd-place finish.