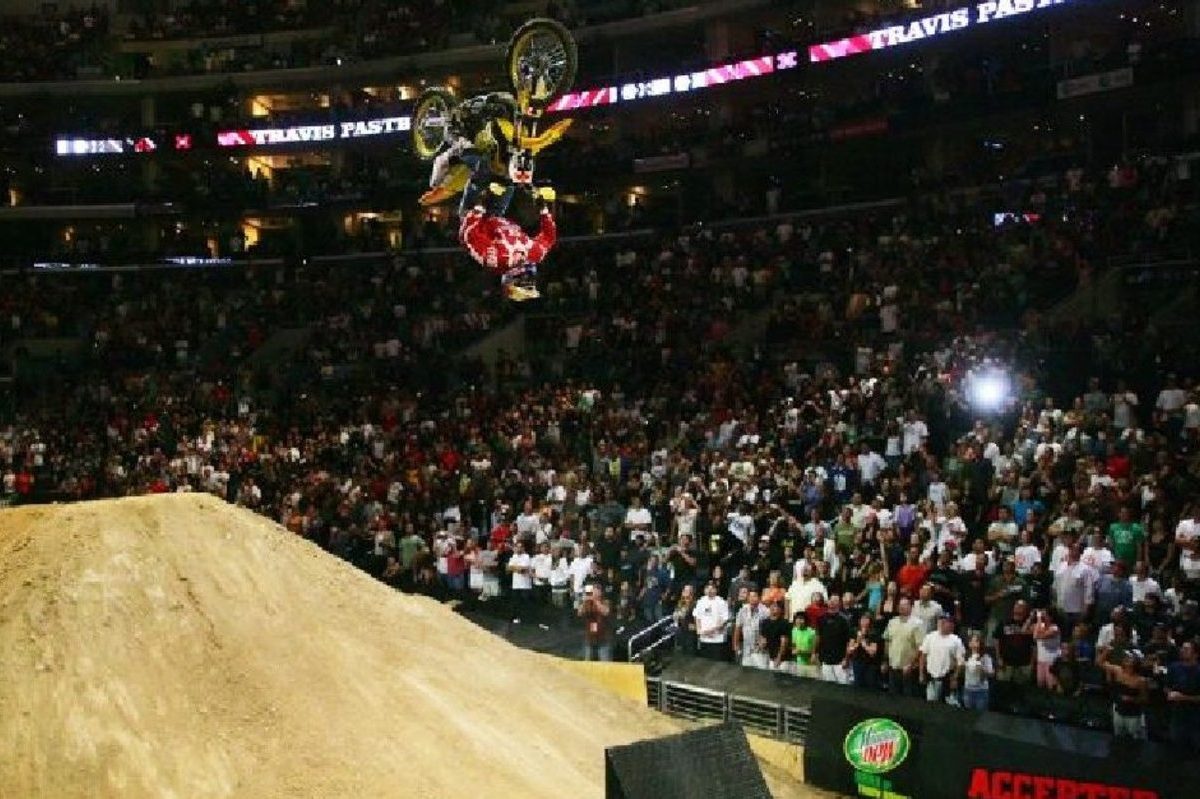 Back in 2006, Travis Pastrana absolutely nailed this double backflip on his first attempt during X Games 12. It will forever go down as one of the most memorable moments in action sports. It was nothing short of amazing that he managed to pull this one off. I mean, you have to remember that this was unheard of at the time. No one was trying something as crazy as a double flip.

You could see Travis’s mom rightfully nervous as she waited for everything to unfold. His friends have said they were genuinely scared for him. Not only did he have the Staples Center in Los Angeles full of people watching, but he had the world watching through ESPN as he made history landing the first double backflip on his Suzuki FMX bike. Just listen to that crowd roaring when he lands it! That was a groundbreaking moment right there, and he made it look almost effortless.

Really though, that’s just what Travis Pastrana does. Make seemingly impossible stunts look easy. He’s done flips over barges, recreated the iconic Evil Knievel jumps, and he’s just an absolute legend who has pushed the level of action sports over the years to unimaginable levels.

Pastrana made X Games history that day in 2006, winning a gold medal. The guy really raised the bar for freestyle motocross, as well. It was a very pivotal point in action sports as it opened new doors for the stunts and variation tricks to get even crazier. Travis is a special kind of human do be able to push himself the way he does. He knows the consequences of messing up are huge. Look at the excitement that exploded from him after he landed that double flip. That’s what successfully doing the impossible looks like. The world really got a taste of what Travis Pastrana was capable of. Over the years, he went on to become a 17-time X Games medalist.

It wasn’t long after this that Travis went on to help create Nitro Circus, which became extremely successful over time and evolved into a massive crew of professionals who continue to break barriers. If you’ve never seen one of their shows or what they can do, man, you’re missing out. You might be thinking, “How the heck do you one-up a double backflip?” Believe it or not, Travis Pastrana was actually planning to do a triple backflip in 2015, but after a lot of practice attempts, he ended up deciding to hand it off to Josh Sheehan to land it. Sheehan did not disappoint.

This double flip was a huge memorable moment for Travis and X Games. Keep in mind this was done almost 15 years ago! It really pushed the sport forward and blessed us with action sports athletes who aren’t afraid to attempt the impossible so they can continue to make our jaws drop.